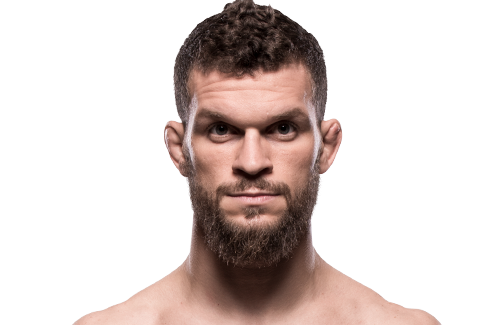 Born and raised in Franklin, Tennessee, Ortiz competed in wrestling at Franklin High School where he was a standout. After graduating, Ortiz was working in construction before being drawn to mixed martial arts.[5]

Ortiz made his professional MMA debut in February 2010, fighting Lucas Thomas at GFC 6, which Ortiz won via first round submission. Ortiz then signed a contract with Strikeforce, but only fought two times with the promotion, he beat Justin Pennington and Matt Horning in his two fights with Strikeforce. Ortiz made his King of the Cage debut in August 2012. In his first fight with KOTC he beat Thiago Veiga by unanimous decision. Ortiz took a small break from MMA shortly after, but returned in January 2013, fighting at RFA 6, he beat Aaron Ely by split decision. Ortiz returned to King of the Cage in what would be his last independent fight before signing with UFC, he fought MMA veteran Mike French to a unanimous decision win.

It was announced Ortiz would be making his debut at UFC Fight Night 27 against Justin Scoggins,[6] but the bout was removed from the card for unknown reasons.[7]

Ortiz instead made his debut against Jose Maria Tome at UFC Fight Night 32 in November 2013.[8] He won the fight via TKO in the third round.

Ortiz was expected to face Alptekin Ozkilic on April 11, 2014 at UFC Fight Night 39.[10] However on April 3, the fight was cancelled due to an injury to Ozkilic.[11] Subsequently, Ortiz was quickly rescheduled and faced promotional newcomer Ray Borg on April 19, 2014 at UFC on Fox 11.[12] Ortiz edged out Borg for a split decision victory.

Ortiz faced Juan Ramirez on May 7, 2014 at the World Championship, winning via Submission (armbar)

Ortiz faced Justin Scoggins on July 6, 2014 at The Ultimate Fighter 19 Finale.[13] He won the fight via split decision.

A rematch with Ian McCall was expected to take place on August 8, 2015 at UFC Fight Night 73.[16] However, McCall pulled out of the fight in late July citing injury and was replaced by Willie Gates.[17] Ortiz dominated the fight with his wrestling and won via TKO in the third round.[18]

Ortiz faced Hector Sandoval on August 5, 2017 at UFC Fight Night 114.[27] He won the fight via knockout just fifteen seconds into the first round, the fastest knockout in UFC Flyweight history.[28] The win also earned Ortiz his first Performance of the Night bonus award.[29]

In an interview in January 2019, Henry Cejudo revealed that Ortiz was released from the UFC.[36] In February 2019, Ortiz clarified that he was offered a release from his contract but opted to fight Benavidez as the last fight of his contract.[37]