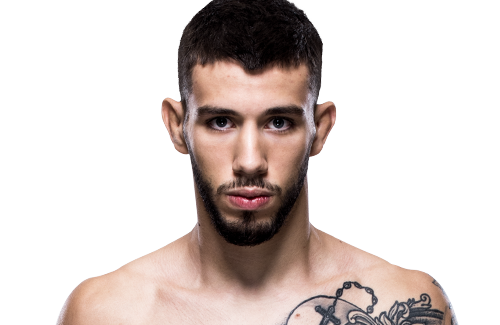 Nicolau began training in various forms of martial arts as a youngster. He then jiu-jitsu as a teenager before transitioning to mixed martial arts in 2010.

Nicolau made his professional mixed martial arts debut in August 2010 at the age of 17. He compiled a record of 10-1-1, competing primarily for various regional promotions in Brazil before trying out for The Ultimate Fighter in early 2015.

In March 2015, it was announced that Nicolau was one of the fighters selected to be on The Ultimate Fighter: Brazil 4.[2]

In his first fight on the show, Nicolau faced Mateus Vasco. He won the fight via submission (rear-naked choke) in the first round.[3]

In the quarterfinals, Nicolau faced off against Reginaldo Vieira. He won the fight via unanimous decision after three rounds.[4]

In the semifinals, Nicolau faced Dileno Lopes. He lost via unanimous decision.[5]

Nicolau made his official debut for the promotion on November 7, 2015 at UFC Fight Night 77 where he faced fellow castmate Bruno Rodrigues.[6] He won the fight submission in the third round.[7]

Nicolau next faced John Moraga on July 8, 2016 at The Ultimate Fighter 23 Finale.[8] He won the fight via split decision.[9]

Nicolau was expected to face Ulka Sasaki on November 19, 2016 at UFC Fight Night 100.[10] However Nicolau was pulled from the bout on November 3 after the USADA revealed a potential anti-doping violation from a sample that was taken October 13.[11]

In February 2019, news surfaced that Nicolau had been released from the UFC.[16]