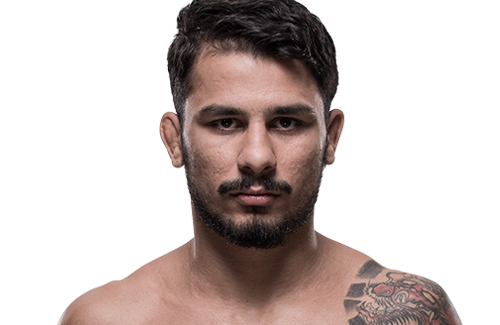 The Ultimate Fighter: Tournament of Champions

On May 11, 2016, the UFC announced that the 16 contestants for the season of this TUF would be flyweight champion fighters from various organizations around the world, with the winner being expected to have a chance to fight for the flyweight title against Demetrious Johnson. The cast was announced on July 20. The coaches for the season were the former challengers to the flyweight belt, Joseph Benavidez and Henry Cejudo, and Pantoja was from Team Cejudo.[2]

He was ranked # 1 in Team Cejudo, and made his first fight against # 16 Team Benavidez, Brandon Moreno. The two came to interact within the house, even with Pantoja speaking Portuguese and Brandon Moreno speaking Spanish, the similarity between languages facilitated communication. In the fight, Alexandre Pantoja defeated Brandon Moreno by finishing (submission) in the second round. With this victory, Pantoja went to the quarterfinals of the reality show.[3][4][5][6]

Pantoja faced fellow team Cejudo member Kai Kara-France in the quarterfinals, defeating him by unanimous decision and progressing through to the semifinals.[7]

Pantoja faced Hiromasa Ogikubo in the semifinals of the tournament and was defeated by unanimous decision, and it was soon announced that he had contracted with the UFC.[8]

Alexandre made his promotional debut on January 28, 2017, at UFC on Fox 23 against Eric Shelton.[9] He won the fight via split decision.[10]