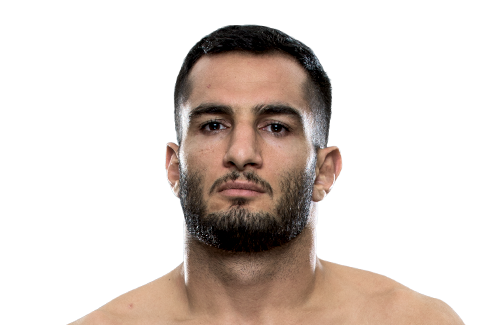 Mousasi was born in Tehran, Iran to Christian Armenian parents during the Iran–Iraq War.[9] He has relatives in both Iran and Armenia.[10] His family name was changed in Iran long before his birth from Mofsesian to Mousasi.[11] At the age of four,[12] Mousasi and his family relocated to Leiden, Netherlands where he finished grade school before developing an interest in martial arts.[13] Mousasi began training in judo[14] at the age of eight[9] and later boxing at age 15; a year later he became the amateur boxing champion of the Netherlands with a 12–1 record, earning nine knockouts. Mousasi then transitioned into kickboxing and then eventually to mixed martial arts.[13]

His older brother Gewik was a mixed martial artist before him, and Gegard decided to follow in his footsteps.[10] Gewik is currently a prolific MMA trainer in Holland.[15] He also currently handles the finances for Gegard’s career payments.[16]

In 2006 Mousasi signed with Pride FC to take part in Pride’s Welterweight Grand Prix. In the opening round Mousasi faced Makoto Takimoto, at Pride Bushido 11, beating the Japanese fighter by TKO as the result of a broken eye socket in the first round. In the quarterfinals Mousasi went on to face Akihiro Gono, but was submitted in the second round by an armbar. After losing to Gono, Mousasi fought Hector Lombard in the Grand Prix Alternate bout and took a unanimous decision victory over the Cuban-born fighter.

On November 21, 2008, ADCC Europe president Marko Leistén confirmed the signing of Mousasi as one of 2009’s ADCC Championships.[18] It was rumored he would fight in the -88 kg category. For unknown reasons, Mousasi never participated in the ADCC 2009 Championships.

Gegard Mousasi next made an appearance at M-1 Global’s Breakthrough event at August 28, 2009, where he sparred with former Pride Heavyweight and current WAMMA Heavyweight Champion Fedor Emelianenko, a friend and teammate, in an exhibition match. The two friends fought a competitive and friendly spirited exhibition with several Judo throws from both Emelianenko and Mousasi. Mousasi was defeated with a straight armbar.[19]

In February 2010, Mousasi left M-1 Global Management. Mousasi was quoted as saying “After careful consideration, I have decided that it is in my best interest to part ways with M-1 Global,” Mousasi wrote in the e-mail. “During the time I spent under their wing, M-1 Global, as a promoter and management company, allowed me to achieve many great things. I appreciate all they have done for me. My management is being taken care of by someone close to me.”[20]

In interviews from early 2009, Mousasi stated the weight he put on after winning Dream’s middleweight tournament was too much for him to cut back down to middleweight and that his next fights would be at light heavyweight and eventually heavyweight instead.[21][22]

Mousasi was set to fight Renato “Babalu” Sobral at Affliction: Trilogy on August 1, 2009, but the event was cancelled after losing its main event 10 days prior to the event.[23] It was originally planned for him to face Vitor Belfort at that event, but there was a disagreement between both fighters over which weight class the fight would be fought at.[24]

Mousasi would go on to win his second Strikeforce bout by TKO (punches), three minutes and forty-three seconds into the 2nd round against Rameau Thierry Sokoudjou, who Mousasi was previously supposed to fight at Dream 11, on November 7, 2009 at Strikeforce: Fedor vs. Rogers.[25] Mousasi was originally slated to defend his Strikeforce Light Heavyweight Championship, but eventually competed in a non-title bout.[26]

On April 17, 2010, Mousasi lost the Strikeforce Light Heavyweight Championship belt in his first defense to Muhammed “Mo” Lawal by way of unanimous judge’s decision. Lawal landed 11 of 14 takedowns,[28] however Mousasi had outlanded Lawal in Total Punches 171 to 125. Mousasi was also given a point deduction following an illegal up-kick.[29] Lawal would later test positive for anabolic steroids following a fight with Lorenz Larkin.[30]

The 1st round took place at Dream 15, where Mousasi faced Jake O’Brien, who came in overweight to their bout. Dream officials made it a catchweight fight, but allowed the fight to be part of the tournament. Mousasi won the fight early in the first round by submission via standing guillotine choke. In the final, Mousasi faced Tatsuya Mizuno. Mousasi dominated the whole fight and finished the Japanese fighter in the first round via rear-naked choke.

Mousasi was expected to face Mike Kyle on April 9, 2011 at Strikeforce 33. However, Kyle was forced off the card with an injury and was replaced by Keith Jardine.[31] The fight resulted in a majority draw (29–27, 28–28, and 28–28), due to an illegal upkick in the first round which resulted in a point deduction for Mousasi. Otherwise the bout would’ve been a unanimous decision victory for Mousasi. According to Fightmetric statistics, Mousasi outstruck Jardine 146 to 21. After the fight in an interview with Ariel Helwani of MMA Fighting.com, Strikeforce CEO Scott Coker stated “I’ve got a lot of respect for Keith Jardine, but I think Gegard won the fight.”[32] In the same interview, Coker also stated that a rematch between Mousasi and Jardine was definitely a possibility for the future. MMA Fighting.com named this fight their Runner-Up for “Robbery of the Half-Year.”[33]

Mousasi returned to Strikeforce to face Ovince Saint Preux on December 17, 2011 at Strikeforce: Melendez vs. Masvidal.[34] He won the fight via unanimous decision, showing improved takedown defense and wrestling.

Mousasi was expected to face Mike Kyle at Strikeforce: Tate vs. Rousey, but Kyle once again withdrew due to injury.[35]

Mousasi was later recovering from knee surgery following a torn ACL and was expected to fully recover by November, 2012.[36] He also signed a new contract for six more fights with the organization, making a total of seven. However, with Strikeforce having shut down,[37] this contract was likely now null and void.

Mousasi faced Mike Kyle at Strikeforce: Marquardt vs. Saffiedine on January 12, 2013.[38] After avoiding most of Kyle’s strikes in the early going, Mousasi took the fight to the ground and went on to finish the fight via rear-naked choke submission late in the first round. This was the fourth time a fight between Mousasi and Kyle was scheduled and the first time it wasn’t canceled.

On January 15, 2013, the UFC announced[39] Mousasi would be joining 19 other Strikeforce fighters in a move to the UFC after his win over Mike Kyle at the promotion’s last event, Strikeforce: Marquardt vs Saffiedine.

Mousasi was expected to make his promotional debut against Alexander Gustafsson on April 6, 2013 at UFC on Fuel TV 9.[40] However, on March 30, Gustafsson suffered a cut in training and, on April 2, was deemed unclear to participate by the Swedish MMA Federation.[41] Gustafsson was replaced by Ilir Latifi, a UFC newcomer and training partner of Gustafsson.[42] Mousasi won by unanimous decision, avoiding his opponent’s takedown attempts and dominating the fight on the feet. He fought with an injured knee and underwent surgery after the fight. UFC President Dana White praised Mousasi for going through with the fight injured and in his opponents home, as well as accepting a late change of opponents.[43]

For his second fight with the promotion, Mousasi moved down to Middleweight to face former UFC Light Heavyweight Champion Lyoto Machida on February 15, 2014 in the main event at UFC Fight Night 36.[44] He lost the fight via unanimous decision. Despite the loss on his record, the bout won Mousasi his first Fight of the Night bonus award.[45]

Mousasi faced Mark Muñoz on May 31, 2014 in the main event at UFC Fight Night 41.[46] He won the fight via submission in the first round and became the first fighter to submit Muñoz. The win also earned Mousasi his first Performance of the Night bonus award.[47]

Mousasi faced Dan Henderson on January 24, 2015 in the co-main event at UFC on Fox 14.[51] He won the fight via TKO in the first round. The win also earned Mousasi his second Performance of the Night bonus award.[52]

Mousasi was expected to face Roan Carneiro on September 27, 2015 at UFC Fight Night 75.[54] However, Carneiro pulled out due to injury and was subsequently replaced by Uriah Hall.[55] After dominating the opening round, Mousasi was finished early in the second after absorbing a jumping spinning back kick, flying knee and follow-up punches.[56]

Mousasi was briefly linked to a fight with Michael Bisping on February 27, 2016 at UFC Fight Night 84.[57] However, on December 24, 2015, Bisping was pulled from the bout in favor of a matchup with Anderson Silva at the same event.[58] Mousasi instead faced Thales Leites.[59] He won the fight via unanimous decision.[60]

Mousasi was expected to face Derek Brunson on July 9, 2016 at UFC 200. It was later revealed that Brunson was forced to pull out of the fight, and that Thiago Santos would replace him to fight Mousasi.[61] He won the fight via TKO in the first round and was awarded a Performance of the Night bonus.[62][63]

Mousasi next faced Uriah Hall in a rematch on November 19, 2016 at UFC Fight Night 99.[66] After mauling Uriah Hall he won the fight via TKO in the first round.[67]

Mousasi faced Chris Weidman at UFC 210 on April 8, 2017.[68] In the second round, Mousasi hit Weidman with two knees to the head, the latter of which had referee Dan Miragliotta interrupt the fight because he mistakenly thought it was illegal. However, upon consultation with another referee “Big” John McCarthy, both knees appeared to be legal under the new unified rules introduced since 2017. Ultimately, the bout was ended and deemed a TKO win for Mousasi.[69] Mousasi accused Weidman of trying to win the fight by disqualification.[70] Weidman admitted he was expecting to win the fight by disqualification. He was only willing to continue when told the knee was legal after almost two minutes of the allotted five to recover by Miragliotta under the assumption the knee was illegal.[71] Audio from Weidman’s corner revealed Matt Serra saying Weidman told physicians he thought it was February. Being unable to tell medical staff the correct date possibly influenced their decision not to let him continue.[72] The NYSAC released a statement that instant replay had been used legally to determine if the knee was legal, disproving the claim of UFC Vice President of Regulatory Affairs Marc Ratner who had told Joe Rogan otherwise on the live pay-per-view.[73]

On July 10, 2017, Mousasi announced that he had signed with Bellator MMA for a six-fights deal and should compete for the middleweight title later in 2017. He also announced that his goal would be also to obtain the light heavyweight belt as well, after becoming the Bellator middleweight champion first.[7]

During the Bellator 181 main card, it was announced by the promotion that Mousasi would make his debut against Alexander Shlemenko at Bellator 185 on October 20, 2017.[74] In the opening minute a punch from Shlemenko broke Mousasi’s right orbital, causing Mousasi to fight with one eye for almost the entire bout.[75] The rest of the first round mainly consisted of Mousasi scoring multiple takedowns, landing many strikes, and attempting several neck cranks and rear naked chokes. A doctor inspected Mousasi’s eye before the second round and deemed him fit to continue. In the second round, both fighters landed strikes in short exchanges for the first three minutes until Mousasi landed two takedowns and spent most of the last two minutes making submission attempts and landing strikes, which caused Shlemenko’s face to bleed. When the round ended, Mousasi was still in a back mount dominant position over Shlemenko. In the third and final round, Schlemenko landed the better of strikes standing up and Mousasi’s only takedown attempt was unsuccessful. Mousasi won the fight via unanimous decision.[76] Seven out of eleven MMA media outlets scored the fight as a decision win for Shlemenko.[77]

Mousasi faced Rafael Carvalho on May 25 at Bellator 200 in London, England for the Bellator Middleweight World Championship.[78] After scoring a takedown early, Mousasi used ground and pound to win the fight via TKO in the first round.[79] Mousasi became the first fighter to win a world title in both Strikeforce and Bellator MMA.[80]

Mousasi was expected to make his second title defense against Rafael Lovato Jr. in the co-headliner of Bellator 214 on January 26, 2019.[83] However, on December 20, 2018, it was reported that Mousasi pulled from the fight, citing a back injury.[84]