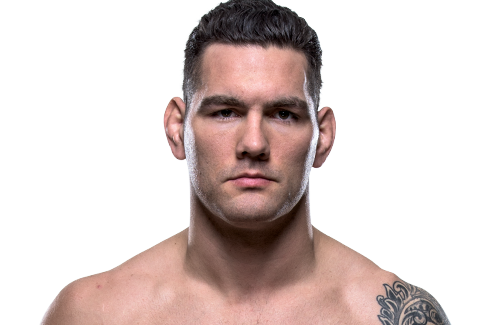 Chris Weidman was born in Baldwin, New York, the second of three children. He is of German and Irish descent[11] and was raised as a Lutheran.[12] He and his older brother were involved in numerous athletic activities. Chris started wrestling at a very young age. With his natural athleticism he mastered the sport very quickly. He attended Baldwin Senior High School on Long Island where he was a Nassau County and New York state wrestling champion. He was an All-American in Cadet Freestyle and Greco Roman.

A standout in college, he earned All-American wrestling honors twice at Nassau Community College before transferring to Hofstra. He became the first junior college wrestler in history to be a NYS Collegiate Champion. At Hofstra, he became a two-time Division I All-American, placing 3rd at the NCAA tournament his senior year. Weidman graduated from Hofstra University with a bachelor’s degree in psychology.[13] He was later a wrestling instructor of the university.[14]

Weidman met Gabriel “Monsta” Toribio while attending Hofstra who invited Weidman to come to Matt and Nick Serra’s BJJ Academy a few miles from campus in Levittown, New York to help some of the fighters with their wrestling. Weidman also took some jiu-jitsu classes and within three months he competed in and won The East Coast Grappler’s Quest in his weight class and the Absolute Division with all 13 matches ending in submissions.[15][16]

With full-time assistant coaching and graduate school at Hofstra, jiu-jitsu had to be put on hold for a while. While coaching, Weidman trained for the Olympic trials. When his dream was not attained, Weidman had to decide if he wanted to continue training for the world teams and Olympics or give MMA a shot. Toribio brought Weidman to Ray Longo’s MMA Academy and introduced Weidman to Longo. With his noticeable technique and skills, Weidman was encouraged to train full-time to fight. In 2011, Longo and Weidman LAW MMA opened, where they are instructors, owners and operators in Garden City, New York.[14]

After winning the ADCC East Coast Trials, Weidman qualified for and competed at the 2009 ADCC Submission Wrestling World Championship (with one year of formal Jiu-Jitsu training) in Barcelona[18] where he lost a quarter-final match-up to world-renowned Jiu-Jitsu practitioner André Galvão.[17]

In May 2015, Weidman earned a black belt in Brazilian Jiu-Jitsu under Renzo Gracie and Matt Serra.[4]

Weidman made his MMA professional debut representing Team Serra-Longo in February 2009 in Louis Neglia’s Ring of Combat 23. He fought as a Middleweight against Reubem Lopes, whom he submitted quickly via kimura, at 1:35 of the first round. Two months later at Ring of Combat 24, he stopped Mike Stewart with punches in the first round.[18]

In his third bout Weidman won the Ring of Combat middleweight title on September 24, 2010, by defeating Uriah Hall at Ring of Combat 31 via punches in the first round. Weidman defended the ROC Middleweight Championship on December 3, 2010, at Ring of Combat 33 with an impressive victory over Valdir Araujo via unanimous decision. By this point Weidman was being called “one of the most highly-touted blue chip middleweight prospects ever”.[20] Weidman was offered contracts by numerous organizations,[21] but Weidman elected to wait until the UFC offered him a contract, which he quickly accepted.

Weidman made his UFC debut against Alessio Sakara on March 3, 2011, at UFC Live: Sanchez vs. Kampmann, replacing an injured Rafael Natal.[22] Weidman, who took the fight on two weeks’ notice and who was also nursing a rib injury,[23] won a unanimous decision, scoring a decisive 30–27 on all three judges’ scorecards.[24]

Weidman next faced Tom Lawlor on November 19, 2011, at UFC 139.[28] He won the fight via technical submission, rendering Lawlor unconscious with a D’arce choke in the first round.[29]

Weidman defeated Demian Maia by unanimous decision (29–28, 30–27, and 29–28) on January 28, 2012, at UFC on Fox 2.[30] The fight was initially announced as a split decision but the judges actually scored it as a unanimous decision, clarified by UFC President Dana White in a tweet.[31] Weidman replaced Michael Bisping on eleven days’ notice after Mark Muñoz was forced out of his fight with Chael Sonnen. Bisping was chosen to take Munoz’s place in the co-main event.[32]

Weidman faced Mark Muñoz on July 11, 2012, at UFC on Fuel TV: Munoz vs. Weidman.[34] Weidman dominated Munoz throughout first round using his wrestling skills. In the second round, he knocked out Munoz with a counter elbow to the forehead followed by ground and pound to a rocked Munoz, which awarded Weidman “Knockout of the Night” honors.[35] After the fight, Weidman expressed a desire to fight Anderson Silva and become the middleweight title holder.[33]

After nearly a year out of competition due to injury and Hurricane Sandy, on July 6, 2013, Weidman faced Anderson Silva for the UFC Middleweight title in UFC 162 before a crowd of 12,399 spectators at the MGM Grand Garden Arena.[38][39] Bookmakers rated Weidman a 2–1 underdog;[40][41] however, numerous pundits and fighters including long-reigning UFC welterweight champion Georges St-Pierre, picked Weidman to upset the long-reigning middleweight champion:[42][43]

As St-Pierre predicted, Weidman knocked out Silva early in the second round with another “Knockout of the Night” performance to become the new UFC Middleweight Champion. In the first round, Weidman took down the champion onto the canvas to apply some solid ground-and-pound. The second round saw Silva clowning around — taunting and mocking Weidman — until he was caught and dropped by Weidman’s left hook which was followed with punches to the grounded Silva — rendering him unconscious. The loss to Weidman was Silva’s first in the UFC and ended his seven-year, 17-fight undefeated streak. The KO victory gave Weidman the distinction of being the first and only person to have ever knocked out Silva in a mixed martial arts match.[44] In honor of Weidman’s victory, Nassau County proclaimed July seventeenth “Chris Weidman Day”.[45][46] Mixed Martial Arts website Sherdog also declared Weidman’s knockout of Anderson Silva as “Knockout of the Year” for 2013.[47]

On July 13, 2013, the UFC President Dana White announced that Weidman would rematch Silva for his first title defense at UFC 168.[48] Silva once again opened as the betting favorite.[49]

At UFC 168 on December 28, 2013, Weidman defended his title against Anderson Silva. In contrast to their first fight in UFC 162, there was no overt showboating by Silva, yet Weidman still had Silva in trouble early in the first round by dropping him — while in the clinch — with a right hook to the side of the head — followed by a barrage of punches. In spite of Weidman’s onslaught, Silva managed to pull guard, regain his composure and bloodied Weidman’s nose with some elbows and hammer-fist punches off his back. Weidman, however, controlled the top position for the remainder of the round and landed punches and elbows.[50] At the start of the second round, Silva attacked Weidman with a series of kicks including a heavy inside low kick which Weidman checked with his left knee. This check snapped Silva’s left fibula and tibia on contact. Silva immediately fell to the mat, forcing referee Herb Dean to stop the fight 1:16 into the second round and give Weidman the victory by TKO.[51] Low kicks were some of Silva’s most effective strikes in their first encounter, which led Weidman to focus on defending against them for the rematch.

A rescheduled bout with Belfort was expected to take place on December 6, 2014, at UFC 181.[60] However, on September 22, it was announced that Weidman had suffered a broken hand and the bout was again rescheduled to take place on February 28, 2015, at UFC 184.[61][62] However, on January 30, the UFC announced that Weidman had pulled out of the bout, citing an injury he sustained in training.[63] The bout with Belfort eventually took place on May 23, 2015, at UFC 187.[64] After surviving an initial flurry of punches from Belfort, Weidman secured a takedown, went into the mount position, and won the fight via TKO due to strikes in the first round.[65]Weidman was expected to defend his belt against Vitor Belfort at UFC 173.[54] Weidman opened as a 2-to-1 betting favorite.[55] After Vitor Belfort withdrew from his title bout at UFC 173, it was announced that Lyoto Machida will next face Weidman.[54][56] However, the bout was delayed after Weidman sustained a knee injury which required a minor surgery on both of his knees, including meniscal tears in both knees that he had since high school.[57] The bout against Machida eventually took place on July 5, 2014, at UFC 175.[58] Weidman retained his title, winning via unanimous decision (49–45, 48–47, and 49–46). The bout also earned Weidman his first Fight of the Night bonus award.[59]

In the fourth defense of his title, Weidman faced Luke Rockhold on December 12, 2015, in the co-main event at UFC 194. Weidman lost the bout and his title via TKO in the fourth round.[66] That was the very first defeat of Weidman’s career. After two and half back-and-forth rounds, Weidman conceded a takedown after a missed wheel kick, Rockhold took Weidman’s back and from there transitioned to the full mount landing heavy damage with ground and pound. After taking damage Weidman survived until the fourth round where Rockhold again took him down and continued his ground and pound success which ultimately led to a fourth-round TKO stoppage by the referee Herb Dean.[67] Both participants were awarded Fight of the Night honors. Chris Weidman’s dad proclaimed to the world that Chris is still his boy.[68]

Weidman signed a new, six-fight contract with UFC late September 2016 and faced Yoel Romero on November 12, 2016, at UFC 205. Weidman lost the fight via TKO in the third round.[71]

Weidman faced Gegard Mousasi at UFC 210. At 3:13 in the second round, Mousasi kneed Weidman twice in the head while Weidman had his hands near the ground. The referee stopped the fight because he thought that the second of these strikes was illegal. Weidman was allowed to recover, but after watching the replay the officials concluded the strike was legal. The doctors did not allow Weidman to continue and a TKO victory was granted to Mousasi.

Weidman next faced Kelvin Gastelum on July 22, 2017, at UFC on Fox 25. After being dropped at the end of the first round, Weidman rallied and submitted Gastelum via arm-triangle choke in the third round. Weidman appeared emotional and said at the post-fight press conference that the doubts and negative comments which he received during his three-fight losing streak was tough on him and his family and he was happy to be back in the game.[72]

A rematch with Luke Rockhold was expected to take place on November 3, 2018 at UFC 230.[73] However, on October 19, 2018 It was reported Luke withdrew from the bout, citing injury, and he was replaced by Ronaldo Souza.[74]Weidman lost the back-and-forth bout via KO at 2:12 of the third round.[75] Both fighters earned Fight of the Night honors.[76]