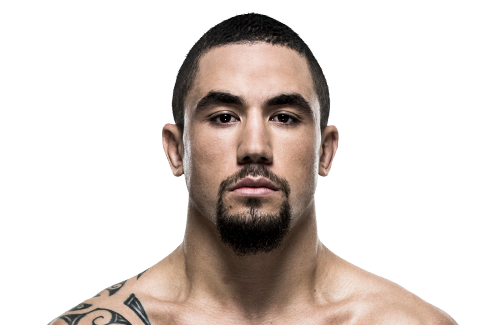 Whittaker’s father enrolled Robert, aged six, and his brother in a Goju-ryu Karate school, to encourage them in self-discipline and self-defence.[9][10] After training in the discipline for a little over eight years, and earning his black belt, his father offered him the chance to change to other sport or drop Karate entirely. While his brother decided to drop out, Robert chose to switch to a Hapkido[11] gym run by Henry Perez, following his move to Menai.[9][12] Not long afterwards, Perez transformed his gym into a MMA gym. Having no other choice, Whittaker began training in MMA and was immediately hooked, choosing MMA as his preferred sport over Rugby League.[10] Whittaker was a brick layer prior to becoming a professional MMA fighter.

In 2008 Whittaker began competing in MMA as a professional. He signed with Australia’s Xtreme Fighting Championships and made his debut 14 March 2009 against fellow pro debutant Chris Tallowin. Whittaker won the fight via TKO in the first round.[14] Whittaker continued his career with Cage Fighting Championships, going 6-0 inside the promotion from 2009 to 2011, with a notable win over fellow TUF: Smashes cast member, Ben Alloway.[15]

On 30 October 2011 Whittaker lost his first fight when he travelled to Cotai, Macau for Legend Fighting Championships 6: he fought Hoon Kim and lost via submission in the first round.[15]Whittaker bounced back from the loss and won two consecutive bouts before suffering his second loss to Jesse Juarez, which brought his overall record to 9–2.

In 2012 Whittaker’s coach, Henry Perez, put him forward for the first series of The Ultimate Fighter: The Smashes,[16][10] which pitted a team of eight Australians against a team of eight men from the United Kingdom, and he was selected as one of the cast members.[17]

In his first fight on the show Whittaker fought Luke Newman. Only 19 seconds into the first round Whittaker landed a punch flush on the chin of Newman, knocking him unconscious for several minutes. The win moved him onto the semifinal round.[18] The knockout also earned Whittaker an additional $25,000 for “Knockout of the Season”.[19]

In the semifinal, Whittaker was matched against replacement fighter and fellow Team Australia teammate, Xavier Lucas. Whittaker won via knockout at 1:17 in the first round. The win moved Whittaker into the final round of the competition, which would take place live on UFC on FX: Sotiropoulos vs. Pearson.

Whittaker was expected to face Brian Melancon on 7 December 2013 at UFC Fight Night 33.[23] However, Melancon pulled out of the bout citing an injury and subsequently retired. As a result, Whittaker was removed from the card as well.[24]

Whittaker faced Stephen Thompson on 22 February 2014 at UFC 170.[25] He lost the fight via TKO in the first round.[26] In the three years following his loss to Thompson, Whittaker won 6 fights in a row prior to earning his fight against Yoel Romero. He said in an interview with The Sydney Morning Herald:

Whittaker faced Clint Hester in a middleweight bout on 8 November 2014 at UFC Fight Night 55.[30] He won the exciting back and forth fight via TKO in the second round. The win also earned Whittaker his first Fight of the Night bonus award.[31]

Whittaker faced Brad Tavares on 10 May 2015 at UFC Fight Night 65.[32] He won the fight via knockout in the first round.[33] The win also earned Whittaker his first Performance of the Night bonus award.[34]

Whittaker was expected to face Michael Bisping on 15 November 2015 at UFC 193.[35] However, Bisping pulled out of the fight on 30 September, citing an elbow injury, and was replaced by Uriah Hall.[36][37] Whittaker defeated Hall by unanimous decision.[38]

Whittaker faced Derek Brunson on 27 November 2016 at UFC Fight Night 101.[41] He won the back and forth fight via first-round TKO.[42] The win also earned him the Performance of the Night and the Fight of the Night bonus awards.[43]

Whittaker faced Ronaldo Souza on 15 April 2017 at UFC on Fox 24.[44] He won by second-round TKO and in the process became the first person to finish Souza since 2008.[45] The win also earned Whittaker his third Performance of the Night bonus award.[46]

Whittaker fought for the interim middleweight title against Yoel Romero on 8 July 2017 at UFC 213, after Michael Bisping announced a nagging knee injury which would go on to keep him on the sidelines for several months.[47] Whittaker won by unanimous decision, and became the first Australian and first New Zealand born fighter to hold a UFC title.[7][48] This win earned him the Fight of the Night bonus award .[49] He missed the remainder of 2017, as he was recovering from a medial knee injury to his left leg.[50]

On 7 December 2017, then middleweight champion Georges St-Pierre vacated the title after being diagnosed with colitis.[51] As a result, Whittaker was promoted to undisputed champion.[52] He was slated for his first title defence at UFC 221 against former middleweight champion Luke Rockhold on 10 February 2018 at Perth Arena in Australia.[53][54] On 13 January 2018, it was reported that Whittaker had pulled out from the event due to an undisclosed injury and would be replaced by Yoel Romero for the interim middleweight championship. The winner of this bout would then face Whittaker in a unification bout.[55] On 20 January 2018, Dana White confirmed that Whittaker was in serious condition after he was not properly treated from a staph infection in his stomach.[56]

A rematch with Romero took place on 9 June 2018 at UFC 225.[57] At the weight-ins, Romero missed weight, coming in at 186 lbs, 1 pound over the Middleweight limit for a title fight. Romero was given additional time to make weight, but he weighed in at 185.2 lbs, 0.2 lbs over the middleweight title fight limit of 185 lbs. Romero was fined 20% of his fight purse and the fight was contested as a non-title catchweight bout.[58][59] He defeated Romero in a back-and-forth fight by split decision. Their fight was awarded with ‘Fight of The Night’ honours. As Romero had failed to make weight, Whittaker received a $100,000 bonus, which would normally have been shared by both fighters.[60]

In July 2018 the UFC announced that Whittaker and Kelvin Gastelum were selected as coaches for Ultimate Fighter 28.[61] On 2 November 2018, it was announced that Whittaker’s next middleweight title defence would be against Kelvin Gastelum, in February at UFC 234.[62] However, Whittaker pulled out of the event a few hours beforehand after he was forced to undergo emergency dual surgery immediately, due to an abdominal hernia of the intestine and a twisted and collapsed bowel.[63]