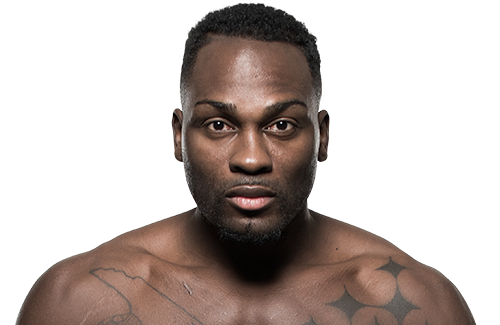 Brunson was a competitive cheerleader and also wrestled at John T. Hoggard High School under coach Dan Willis.[7] Brunson had scholarships for both cheerleading and wrestling but choose to wrestle at college. Brunson was a 3-time Division II All-American wrestler from the University of North Carolina at Pembroke.[8] When he finished college he immediately turned his attention to mixed martial arts. He trains at Renzo Gracie Jiu-Jitsu and Jackson’s MMA along with Jon Jones.[4]

Brunson made his professional MMA debut in May 2010 against John Bryant where he won by a rear naked choke in under a minute. He then won his next 5 fights with none of them having made it past 2:30 of the first round.[9]

Brunson made his Strikeforce debut on June 24, 2011, at Strikeforce Challengers: Fodor vs. Terry against undefeated Jeremy Hamilton.[10] He won the fight via unanimous decision.

In a quick turnaround, Brunson fought his second fight for Strikeforce just over one month after his debut. He faced Lumumba Sayers on the undercard of Strikeforce: Fedor vs. Henderson on July 30, 2011.[11] He won the fight via submission in the first round.

Brunson’s next fight was on November 18, 2011, at Strikeforce Challengers: Britt vs. Sayers against Nate James. He won the fight via unanimous decision.

Brunson was scheduled to face Ronaldo Souza on March 3, 2012, at Strikeforce: Tate vs. Rousey. However, the Ohio State Athletic Commission denied his fight license based on an eye exam he had submitted. Derek fought wearing contacts in all of his bouts but Ohio has a rule against this. Derek immediately scheduled a Lasik procedure and missed about 6 weeks.[12]Brunson later faced Souza on August 18, 2012, at Strikeforce: Rousey vs. Kaufman and was defeated by KO at :41 of the 1st round.

Brunson was accepted to compete in The Ultimate Fighter 17, but on the first day of filming he was pulled from the competition due to Showtime having yet to release him from his contract.

Brunson made his UFC debut replacing an injured Karlos Vemola against Chris Leben on December 29, 2012, at UFC 155.[13] Despite being a late replacement and heavy underdog, Brunson utilized his superior wrestling to defeat Leben via unanimous decision.

Brunson was expected to face Ronny Markes on June 8, 2013, at UFC on Fuel TV 10.[14] However, the bout was scrapped on the day of the weigh in as Markes was involved in a traffic accident. While Markes was not seriously injured, the incident prevented him from competing.[15]

Brunson was expected to face Antonio Braga Neto on November 6, 2013, at UFC Fight Night 31.[18] However, Neto pulled out of the bout citing an injury and was replaced by Brian Houston.[19] Brunson won the fight in impressive fashion early, connecting with a head kick on Houston and then securing a rear-naked choke submission.

The bout with Romero was rescheduled for January 15, 2014, at UFC Fight Night 35.[20] After winning the first two rounds, Brunson was dropped by a left hook and lost the fight via TKO due to elbows on the ground in the third round. Both fighters earned a $50,000 Fight of the Night bonus award.[21]

On February 15, 2014, it was announced that Brunson has signed a four-fight contract with UFC.[22]

Brunson was expected to face Ed Herman on December 13, 2014, at UFC on Fox 13.[25] However, the bout was scrapped just hours before the fight, as Brunson was stricken with a stomach ailment.[26] Subsequently, the bout with Herman was rescheduled and took place on January 31, 2015, at UFC 183.[27] Brunson won the fight via TKO in the first round.

Brunson was expected to face Krzysztof Jotko on June 20, 2015, at UFC Fight Night 69.[28] However, Brunson pulled out of the fight on June 9 citing a rib injury and was briefly replaced by Uriah Hall.[29] Three days after the booking, Hall was removed due to an alleged visa issue. In turn, Jotko was removed from the card entirely.[30]

Brunson next faced Roan Carneiro on February 21, 2016, at UFC Fight Night 83.[33] He won the fight via TKO, earning his third consecutive TKO stoppage in the first round.[34]

Brunson faced Uriah Hall on September 17, 2016, at UFC Fight Night 94.[36] Brunson won the fight via TKO in the first round after dropping Hall with a left hook and finished him with a flurry of ground and pound.[37]

Brunson faced Robert Whittaker on November 27, 2016, at UFC Fight Night 101.[38] He lost the back and forth fight via first round TKO. Both participants were awarded a Fight of the Night bonus.[39][40]

Brunson fought Dan Kelly on June 11, 2017 at UFC Fight Night 110.[43] He won by knockout in the first round after dropping Kelly with a straight left and finishing him off with a barrage of ground and pound.[44]

Brunson faced Lyoto Machida on October 28, 2017 at UFC Fight Night 119.[45] He won the fight via knockout in the first round.[46] This win also earned him a Performance of the Night bonus award.[47]

Brunson was expected to face Antônio Carlos Júnior on August 4, 2018 at UFC 227.[50] However, Brunson pulled out of the fight in early July citing an eye injury.[51]