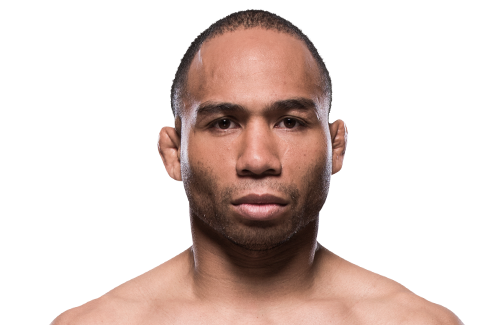 Dodson was born in Albuquerque, New Mexico. He grew up in Albuquerque and later moved to Edgewood, New Mexico with his family. He attended Moriarty High School in Moriarty, New Mexico.[4] Dodson is half African-American, half Filipino.[5] While attending Moriarty, Dodson competed in track, football and wrestling. In wrestling Dodson was a two-time state champion, one time state runner-up and four time district champion.[6] Dodson graduated from high school in 2003, and then enrolled at the University of New Mexico while working at a local Chuck E. Cheese’s restaurant.[4][6][7]

Dodson began training MMA in 2002 after Chris Luttrell, and Greg Jackson recruited him for his extensive wrestling background. After the first day of training he “fell in love with the sport” and continued to train daily with Jackson.[6]

Dodson competed in a Grappler’s Quest and won in the beginner level. Four months later he did another submission tournament, winning that at the intermediate level. Six months later Dodson competed in his first amateur fight. He competed in one other amateur bout before turning pro.[6] Dodson was offered to make his debut in Japan against the number one ranked flyweight in the world, Yasuhiro Urushitani.[6] Dodson lost the fight via decision.[8]

With the lack of fights materializing at flyweight, Dodson began taking fights at featherweight and bantamweight as well. He obtained a 3–2 record before taking a fight against future WEC fighter, Clint Godfrey, winning the fight via decision. With the win over Godfrey, Dodson was selected to be a part of the second season of the Tapout Reality show.[9]

Despite having a 1–1 record under the Ultimate Warrior Challenge promotion, he was awarded shot at the vacant UWC flyweight title at UWC 7. Dodson was defeated by Pat Runez in a highly controversial five-round decision. At UWC 8, Dodson defeated previously unbeaten Jesse Riggleman via unanimous decision.

Dodson was expected to fight at Tachi Palace Fights 9 against Alexis Vila.[10] However, Vila suffered an injury and was forced to pull out of the bout. Vila was replaced by former Shooto champion Mamoru Yamaguchi.[11] Dodson then pulled out of the fight for unknown reasons, and was replaced by Kevin Dunsmoor.[12]

Dodson was selected as a part of Team Mayhem, he was the first bantamweight chosen for the team (fourth overall). Dodson defeated John Albert via unanimous decision in the preliminary round and moved onto the semi-finals.

In the semi-finals Dodson was selected to fight Team Mayhem teammate, Johnny Bedford. After a close first round, Dodson won the fight via KO in the first minute of the second round. The win moved Dodson into the finals. The impressive finish also won Dodson an additional $25,000 for the fan voted “Knockout of the Season”.

For his next fight, Dodson moved back down to the flyweight division and was expected to face Darren Uyenoyama on May 5, 2012 at UFC on Fox 3.[14] However, Uyenoyama was forced out of the bout, and was replaced by promotional newcomer Tim Elliott.[15] Dodson defeated Elliott by unanimous decision, generating crowd booing.[16]

Dodson faced promotional newcomer Jussier Formiga on October 5, 2012 at UFC on FX 5.[17] He won the fight via TKO in the second round.[18]

Dodson faced UFC Flyweight champion Demetrious Johnson on January 26, 2013 at UFC on Fox 6,[19] becoming the first Ultimate Fighter alumnus to fight for a title post-season 5. Despite knocking Johnson down twice in the second round, Dodson lost the fight via unanimous decision in a bout that earned both participants Fight of the Nighthonors.[20][21]

Dodson was expected to face Scott Jorgensen on December 14, 2013 at UFC on Fox 9, replacing Ian McCall.[25] However, Dodson himself was forced from the bout after sustaining a knee injury.[26] Jorgensen instead faced promotional newcomer Zach Makovsky.[27]

A rematch with John Moraga took place on June 7, 2014 at UFC Fight Night 42.[28] Dodson won the fight via TKO due to a doctor stoppage between rounds two and three after a knee he threw late in the second round.[29]

A rematch with the Flyweight champion Demetrious Johnson took place on September 5, 2015 at UFC 191.[32] In a completely one-sided affair, Dodson lost the fight via unanimous decision.[33]

Dodson faced John Lineker on October 1, 2016 at UFC Fight Night 96.[36] The bout took place at a catchweight of 136.5 lbs as Lineker missed weight. He lost the back and forth fight via split decision.[37]

Dodson was expected to face Pedro Munhoz at UFC Fight Night 125 on February 3, 2018.[42] However, Munhoz missed weight by four pounds over the bantamweight non-title fight upper limit of 136 pounds, negotiations fell through, and the fight was cancelled.[43] The fight was rescheduled to UFC 222 on March 3, 2018.[44] Dodson won the bout via split decision.[45]

Dodson’s contract with UFC expired after the fight with Munhoz and after listening to offers from various companies, he re-signed a new four-fight with UFC.[46]