Notice: Function WP_Scripts::localize was called incorrectly. The $l10n parameter must be an array. To pass arbitrary data to scripts, use the wp_add_inline_script() function instead. Please see Debugging in WordPress for more information. (This message was added in version 5.7.0.) in /var/www/wp-includes/functions.php on line 5835
 T.J. Dillashaw - Ranking MMA 
Notice: A non well formed numeric value encountered in /var/www/wp-content/themes/mma-sport-magazine/inc/live-style.php on line 40 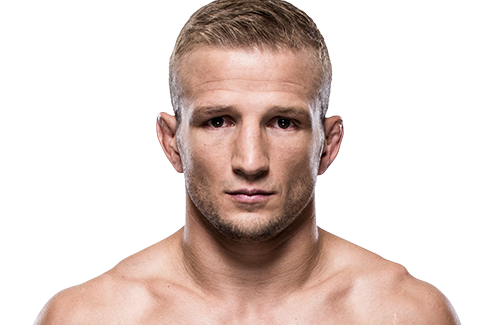 Dillashaw was born in Sonora, California, to Hal and Janice Dillashaw. He grew up in Angels Camp, California,[8] where he also attended Bret Harte High School. During his four years there, Dillashaw competed on the school’s wrestling team and played on the football team for his 2002-2003 junior year. In June 2004 he graduated and enrolled for college at California State University, Fullerton. At college, Dillashaw competed successfully for the Titans wrestling program.

While wrestling for Coach Jan Schulz at Bret Harte High School, Dillashaw was a four-time sectional qualifier and two-time California Interscholastic Federation (CIF) state qualifier. As a junior, Dillashaw placed fifth at the CIF state championships, and ended the season with a record of 45–7. He placed second at the CIF State championships as a senior to cap off a 52–6 record and finished with an overall record of 170–33.[8]

With a successful high school career, Dillashaw received a full-ride scholarship to wrestle for Cal State Fullerton Titans. In the 2005–06 season, Dillashaw’s freshman year, he posted a 14–16 record including a 10–8 mark in dual matches. He went 3–4 in Pac-10 dual meets. Dillashaw traveled to Ukraine in the summer of 2006 to work on his wrestling skills.[8] Dillashaw’s sophomore season was a more successful one having an overall record of 17–14 with an 11–4 mark in duals, including 5–3 in the Pac-10. In April 2007, he placed sixth in the University Greco Wrestling Championships in Akron, Ohio, at 132.25 pounds.[8] He also placed fourth at the Pac-10 championship in 2007.

In 2008, he placed fourth in the Pac-10 Championships and finished with a 22–10 record with four pins. He was 7–0 in Pac-10 duals, taking second place at Cliff Keen Invitational. His senior season he was ranked 10th in the nation at 133 lbs.[8] Dillashaw is a 3X NCAA qualifier.

After graduating from Cal State Fullerton, Dillashaw contemplated turning to MMA. Mark Munoz coached at Cal St. Fullerton for 3 years, while competing in the UFC middleweight division and invited Dillashaw to join the Reign Training Center fighter class at the conclusion of his senior year. After training with Team Reign for a year and a half, Munoz encouraged Dillashaw to move up north closer to his hometown of Angels Camp, CA to Team Alpha Male in Sacramento, CA. Dillashaw began training with Team Alpha Male, and collected a 2–0 amateur record before turning pro.[9]

Dillashaw picked up two more wins to move his record to a perfect 4–0 before trying out for the fourteenth season of The Ultimate Fighter.

Dillashaw was selected as a part of Team Bisping, he was the second bantamweight chosen for the team (seventh overall). Dillashaw defeated Roland Delorme via rear naked choke submission in the preliminary round and moved onto the semi-finals. It was there he fought Dustin Pague for the first spot in the bantamweight final on the finale card. Dillashaw dominated Pague, grinding out three tough rounds to win the fight via unanimous decision (30–26, 30–27, 30–26).

Dillishaw’s sophomore outing came on February 15, 2012, at UFC on Fuel TV 1 against Walel Watson.[10] Dillashaw dominated Watson using his superior wrestling to control him on the ground, while nearly ending the fight several times with multiple submission attempts. Dillashaw won the bout via unanimous decision (30–25, 30–25, 30–26).[11]

Dillashaw fought Vaughan Lee on July 11, 2012, at UFC on Fuel TV: Munoz vs. Weidman.[12] He won the fight by submission via a standing neck crank in the first round.[13]

Dillashaw was expected to face Mike Easton on December 8, 2012, at UFC on Fox 5.[14] However, Dillashaw was forced out of the bout with an injury and replaced by Bryan Caraway.[15]

Dillashaw was briefly linked to a bout with Raphael Assunção on September 4, 2013, at UFC Fight Night 28.[20] However, the pairing was delayed and took place at a later event this year due to a minor medical issue for Assunção.[21]

The bout with Assunção was rescheduled and took place on October 9, 2013, at UFC Fight Night 29.[22] Assunção defeated Dillashaw via split decision.[23] The back and forth action earned both the participants Fight of the Night honors.[24]

Dillashaw was expected to face Takeya Mizugaki on May 24, 2014, at UFC 173.[27] However, with the show losing its main event, Dillashaw was moved up the card to face Bantamweight champion and top 5 pound for pound Renan Barão in the featured bout.[28] In one of the biggest upsets in UFC and MMA history,[29] Dillashaw won the fight in dominant fashion, defeating Barão via TKO in the fifth round to become the new UFC Bantamweight champion. In addition to winning the title, Dillashaw received bonuses for Fight of the Night and Performance of the Night.[30]

While interviewing Dillashaw after the fight, Joe Rogan said:

A rematch with Barão was rescheduled and was expected to take place on April 25, 2015 at UFC 186.[36] However a month before the event, Dillashaw was forced out of the bout after sustaining a broken rib while training.[37]An immediate rematch with Barão was scheduled to take place on August 30, 2014, at UFC 177.[32] However, the day of the weigh-ins, Barão had to be admitted to the hospital as a result of his attempts to cut weight and was replaced by Joe Soto who was already scheduled to compete in a fight on the event’s preliminary card.[33] Dillashaw defeated Soto via knockout in the fifth round.[34] The win also earned Dillashaw his second consecutive Performance of the Night bonus award.[35]

The rematch eventually took place at UFC on Fox 16 on July 25, 2015.[38] Dillashaw won the fight via TKO in the fourth round to retain his title. He also earned a Performance of the Night bonus.[39][40]

Dillashaw faced former champion Dominick Cruz on January 17, 2016 at UFC Fight Night 81[41] He relinquished the title dropping a split decision.[42] Both participants were awarded Fight of the Night honors.[43]

Road back to the title

Coaching The Ultimate Fighter and regaining the title

In January 2017, the UFC announced that Dillashaw would be one of the coaches, opposite current UFC Bantamweight champion (and former Team Alpha Male teammate) Cody Garbrandt on The Ultimate Fighter 25, with the pairing expected to face each other on July 8, 2017 at UFC 213.[48][49] However the bout was scrapped on May 23 after Garbrandt sustained a back injury.[50] The bout was rescheduled and eventually took place on November 4, 2017 at UFC 217.[51] Dilashaw won the fight via knockout in the second round to regain the UFC Bantamweight Championship.[52] This win also earned Dillashaw his fifth Performance of the Night bonus award.[53]

Dillashaw faced Cody Garbrandt in a rematch for the UFC Bantamweight Championship on August 4, 2018, at UFC 227.[54] He defeated Garbrandt in the first round by way of TKO.[55] This win earned him the Performance of the Night award.[56]

Dillashaw was initially scheduled to face Henry Cejudo on January 26, 2019 at UFC 233 for the UFC Flyweight Championship.[57] However, after that pay-per-view event was cancelled, the fight was moved a week earlier to headline UFC Fight Night 143 on January 19, 2019.[58] Dillashaw lost the fight via TKO just 32 seconds into the first round.[59]

On March 20, 2019, Dillashaw announced via Instagram that he would be voluntarily relinquishing the UFC bantamweight championship after USADA and NYASC found adverse findings following his last fight against Henry Cejudo. Dillashaw would also receive a suspension from NYASC, this would be retroactive to the Cejudo fight on January 19, 2019.[60][61] He received a one year suspension by the New York State Athletic Commission (NYSAC) retroactive to January 19, 2019, making him ineligible to fight until January 19, 2020.[62]