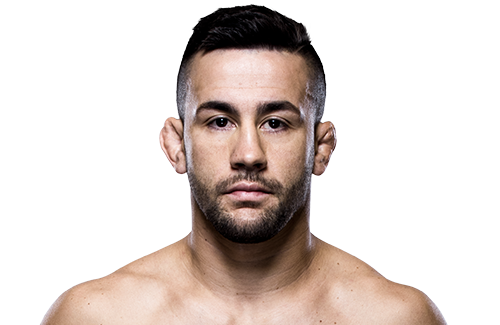 A professional since 2009, Munhoz began his career competing in local promotions in his native São Paulo, Brazil before moving to the United States in 2011. He competed in several regional promotions across the United States, compiling an undefeated record and eventually became Resurrection Fighting Alliance bantamweight champion on August 16, 2013, after defeating notable veteran Jeff Curran by split decision.[6][7] Munhoz defended his title for the first time on January 24, 2014, defeating Billy Daniels via first round submission. After the victory over Daniels, Munhoz signed with the UFC in early February 2014.[8]

Munhoz made his promotional debut on February 22, 2014, as a short notice replacement for an injured Francisco Rivera and faced top contender Raphael Assunção at UFC 170.[9] Assunção defeated Munhoz via unanimous decision.[10]

Munhoz faced Jerrod Sanders on October 4, 2014, at UFC Fight Night 54.[13] He won the fight via submission in the first round.[14] A few months later, it was revealed that Munhoz tested positive for elevated levels of testosterone. Munhoz’s camp requested testing documentation and didn’t receive it until three months later. He said a review of the results by anti-doping specialist Paul Scott determined that his testosterone was not, in fact, elevated, coming in at 850 ng/mL, or on the high end of the normal range for men his age. He admitted to using two supplements allowed by the UFC that may have elevated his testosterone, but not outside the legal limit.[15] On November 4, 2015, Munhoz was suspended for one year retroactive to his fight due to testosterone metabolites of an exogenous origin and his win was changed to a no-contest.[16]

Munhoz next faced Russell Doane on July 7, 2016, at UFC Fight Night 90.[19] He won the fight via submission in the first round and was awarded a Performance of the Night bonus.[20][21]

Munhoz was expected to face John Dodson at UFC Fight Night 125 on February 3, 2018.[30] However, Munhoz missed weight by four pounds over the bantamweight non title fight upper limit of 136 pounds, and Dodson declined to take the fight and the fight was cancelled.[31] The fight was rescheduled to UFC 222 on March 3, 2018.[32] Munhoz lost the fight via split decision.[33][34]

Muhnoz faced Bryan Caraway on November 30, 2018, at The Ultimate Fighter 28 Finale.[37] He won the fight via technical knockout in round one.[38]