Notice: Function WP_Scripts::localize was called incorrectly. The $l10n parameter must be an array. To pass arbitrary data to scripts, use the wp_add_inline_script() function instead. Please see Debugging in WordPress for more information. (This message was added in version 5.7.0.) in /var/www/wp-includes/functions.php on line 5835
 Junior dos Santos - Ranking MMA 
Notice: A non well formed numeric value encountered in /var/www/wp-content/themes/mma-sport-magazine/inc/live-style.php on line 40 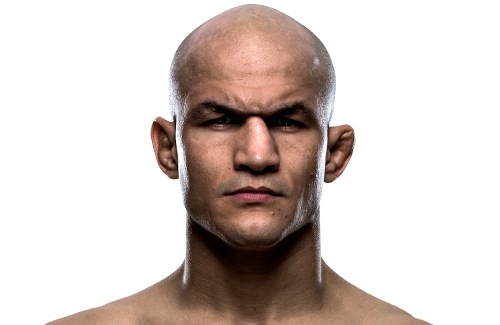 Dos Santos was raised by a single mother. In order to help his family he started to work at the age of ten. He trained Capoeira throughout his teenage years before his first serious contact with martial arts happened at the age of 21, when he began training in Brazilian jiu-jitsu under Yuri Carlton. After only six months of training, dos Santos won a few jiu-jitsu tournaments in Salvador.[9][10] One year later, Dos Santos was invited to join a boxing practice by a friend, where he met his boxing coach Luiz Carlos Dórea. Dórea also trained Mixed martial arts and roughly a year after he started training boxing he had his debut professional fight.[11][12]

Dos Santos turned professional in 2006 at the age of 22. He fought in small promotions in Brazil such as Demo Fight, Extreme Fighting Championship, Minotauro Fights and Mo Team League. He won six of his first seven bouts, suffering his only loss to Joaquim Ferreira, a fighter he had previously beaten.

Dos Santos debuted for the UFC on 25 October 2008 at UFC 90. Considered a major underdog,[13] he knocked out top contender Fabrício Werdum at a minute and twenty seconds of the first round with a strong uppercut,[14][15] earning himself a “Knockout of the Year” award.[16]

Returning on 21 February 2009 at UFC 95 he fought promotional newcomer Stefan Struve, defeating him at fifty-four seconds of the first round by knockout.[17]

On 19 September 2009, Dos Santos continued his winning streak and defeated Mirko Cro Cop at UFC 103.[18] During the third round Dos Santos dominated Cro Cop in the clinch with knee strikes and punches. A knee from the clinch and a right uppercut apparently caused damage to Mirko’s left eye, causing him to verbally submit.[19]

UFC 108 scheduled a fight between Dos Santos and Gabriel Gonzaga. However, Gonzaga pulled out of the bout on 25 November 2009 due to a staph infection.[20] Instead, on 2 January 2010, dos Santos fought Gilbert Yvel,[21] winning the fight via TKO at two minutes and seven seconds of the first round.[22]

Dos Santos defeated Gabriel Gonzaga on 21 March 2010, at UFC Live: Vera vs. Jones by knockout in the first round.[23] earning him his second “Knockout of the Night” award.[24]

Dos Santos faced Roy Nelson on 7 August 2010, at UFC 117.[25] The fight saw dos Santos use a variety of strikes and, for the first time, a successful takedown.[26] Despite dos Santos’ striking ability, Nelson was able to stay in the fight,[27] resulting in the fight going to decision.[28] Dos Santos won via unanimous decision (30–26, 30–27, and 30–27).[29] Following the win, dos Santos was expected[by whom?] to challenge Cain Velasquez for the heavyweight title. However, a torn rotator cuff suffered by Velasquez sidelined the champion for nearly a year.[30][31]

On 11 January 2011, it was revealed[by whom?] that dos Santos would be one of the coaches of The Ultimate Fighter Season 13, opposite to Brock Lesnar.[32] They were scheduled to face each other on 11 June 2011, at UFC 131,[33] but Lesnar pulled out of the bout due to a recurrence of diverticulitis and was replaced by Shane Carwin.[34] Dos Santos dominated Carwin and defeated him via unanimous decision (30–27, 30–27, and 30–26),[35] relying predominantly on his boxing skills,[36] but showed more variety in his game by landing a couple of kicks and completing two takedowns in the third round.[37][38]

Dos Santos faced Cain Velasquez at UFC on Fox 1 for the UFC Heavyweight Championship on 12 November 2011.[39] He defeated Velasquez in 64 seconds of the first round via KO to win the UFC Heavyweight Championship[40] He dropped Velasquez with an overhand right and finished him off with a series of punches.[41] The performance also earned him his third “Knockout of the Night” award.[42] After the fight, it was revealed that he had a torn meniscus in his knee;[43] he subsequently underwent a successful knee surgery.[44]

Dos Santos was scheduled to face Alistair Overeem on 26 May 2012 at the MGM Grand Garden Arena at UFC 146.[45] On 4 April 2012, the Nevada State Athletic Commission announced Overeem had failed a pre-fight drug test.[46] Consequently, Overeem’s request for a license was denied.[47] On 20 April 2012, Dana White the UFC president announced Frank Mir would be replacing Overeem.[48] Dos Santos was able to keep the fight standing, showing his superior boxing skills, resulting in a KO in the second round.

A rematch against Cain Velasquez was expected on 22 September 2012 at UFC 152.[49] However, it was later announced by Dana White that the fight would take place in Las Vegas on 29 December 2012 at UFC 155. dos Santos fell short to Velasquez after five rounds of a one-sided match and lost his title via unanimous decision (50–45, 50–43, and 50–44).[50] This marked the first time dos Santos had suffered a loss in the UFC. Dos Santos later claimed that he was training so hard prior to the bout with Velasquez that he developed rhabdomyolysis, a (sometimes fatal) breakdown of muscle fibers that releases their contents into the bloodstream and that the condition affected his performance during the fight.[51]

Back into contention (2013–present)

Dos Santos was expected to face Alistair Overeem on 25 May 2013 at UFC 160.[52] However, in early March, Overeem pulled out of the bout citing an injury.[53] The bout was expected to be rescheduled for a future event,[54] However, on 9 March, UFC President Dana White confirmed that dos Santos’ next opponent would be Mark Hunt at the same event.[55] Dos Santos won the fight via third-round knockout.[56] This fight earned both participants Fight of the Nightaward.[57]

A third fight with Cain Velasquez took place on 19 October 2013 at UFC 166.[58] Although dos Santos experienced more moments of success than in their second fight, he was still dominated by Velasquez for most of the fight. He lost via TKO at 3:09 of the fifth round after landing on his head during an attempted submission and follow up punches from Velasquez.[59]

Dos Santos was expected to face Stipe Miocic on 24 May 2014 at UFC 173.[60] However, the bout was slightly delayed and was scheduled to take place a week later on 31 May 2014 at The Ultimate Fighter Brazil 3 Finale.[61] However, on 5 May, it was announced that dos Santos pulled out of the fight citing a hand injury[62][63] and he was replaced by Fabio Maldonado.[64]

After a year away from the sport, dos Santos had the three-years-delayed fight with Alistair Overeem which eventually took place on 19 December 2015 at UFC on Fox 17.[68] He lost the bout by technical knockout in the second round.[69]

Dos Santos was originally expected to face Stefan Struve in a rematch on 19 February 2017 at UFC Fight Night 105.[72] However on 12 January Struve pulled out due to a shoulder injury.[73] Despite having over six weeks before the event, promotion officials elected to remove Dos Santos from the event instead of having him face a replacement.[74]

Dos Santos faced Stipe Miocic on 13 May 2017 at UFC 211 for the heavyweight title.[75] He had previously beaten Miocic by a close unanimous decision at UFC on Fox: dos Santos vs. Miocic in 2014. Dos Santos lost the fight via TKO in the first round.[76]

Dos Santos was expected to face Francis Ngannou on 9 September 2017 at UFC 215.[77] However, on 18 August, Dos Santos was pulled from the match after being notified of a potential USADA violation.[78] On 24 April 2018 dos Santos was clear of intentionally using of Performance-enhancing drugs (PEDs) by USADA, where dos Santos had taken tainted supplement which contained hydrochlorothiazide from the compounding pharmacies in Brazil. He is eligible to compete immediately as of 24 April 2018.[79]