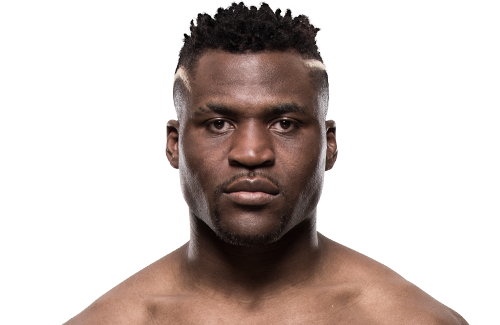 Ngannou was born and raised in the village of Batié, Cameroon.[6] He lived in poverty and had little formal education growing up.[7] At 12 years old, Ngannou started working in a sand quarry in Batié because of a lack of funds.[8] As a youngster, he was approached by various gangs in his village to join them.[9] However, Ngannou refused and instead decided to use his father’s negative reputation as a street fighter as motivation to do something positive and pursue boxing.[9]

At the age of 22, Ngannou began training in boxing, despite reluctance from his family in the beginning.[9] After training for a year, Ngannou stopped training due to an illness.[10] He did various odd jobs to make ends meet, until at the age of 26, he emigrated to Paris, France to pursue professional boxing.[11] After Ngannou reached Paris, he had no money, no friends and no place to live.[7] After living homeless on the streets of Paris, he began training for free in August 2013 under Didier Carmont.[12][8] Being a fan of Mike Tyson, Ngannou was originally interested in learning how to box until his coach introduced him to the sport of MMA.[11]

Ngannou started his MMA career mostly fighting in the French promotion 100% Fight, as well as other regional promotions in Europe.[13]

Ngannou made his promotional debut against fellow newcomer Luis Henrique on 19 December 2015 at UFC on Fox 17.[14] He won the fight via knockout in the second round.[15]

Ngannou next faced promotional newcomer Curtis Blaydes on 10 April 2016, at UFC Fight Night 86.[16] He won the fight via TKO, due to doctors stoppage, at the conclusion of the second round.[17]

Ngannou faced Andrei Arlovski on 28 January 2017, at UFC on Fox 23.[23] He won the fight via TKO in the first round. The win also earned Ngannou his second Performance of the Night bonus.[24] Ngannou was expected to face Junior dos Santos on 9 September 2017 at UFC 215.[25] However, on 18 August, Dos Santos was pulled from the match after being notified of a potential USADA violation.[26] In turn, Ngannou was removed from the card after promotion officials deemed that a suitable opponent could not be arranged.[27][28] In the highest profile fight of his career, Ngannou faced Alistair Overeem on 2 December 2017 at UFC 218.[29] He won the fight via knockout in the first round.[30]

Ngannou fought Stipe Miocic for the UFC Heavyweight title on 20 January 2018 at UFC 220.[31] He lost the fight via unanimous decision.[32]

Ngannou faced Curtis Blaydes in a rematch on 24 November 2018 in the main event at UFC Fight Night 141[39] He won the fight via TKO early into the first round.[40] The win also earned him a Performance of the Night bonus.[41]

Ngannou headlined UFC’s inaugural event on ESPN, UFC on ESPN 1 against Cain Velasquez on 17 February 2019.[42] He won the fight via technical knockout in the first round.[43]