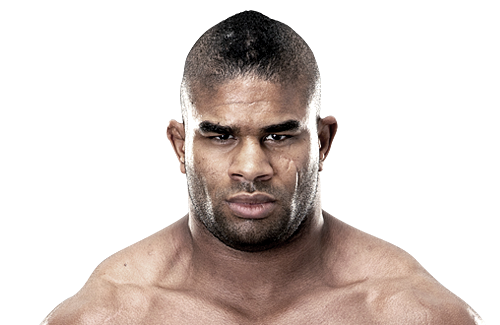 Overeem was born in Hounslow, England to a Jamaican father and a Dutch mother whose family tree connects him to King William III of the Netherlands.[9] When he was six years old, his parents divorced and he moved with his mother and older brother to the Netherlands. As a child, Overeem competed in judo, track and field and basketball. At the age of 15, Overeem’s older brother Valentijn took him to Chris Dolman‘s MMA gym to learn to defend himself.[10] Alistair initially did not like the sport, but he dedicated fully to it after meeting Bas Rutten and Joop Kasteel.[10]

Overeem had his first MMA professional fight at 19 years old, defeating Ricardo Fyeet by submission on 24 October 1999 at It’s Showtime, the first event of the eponymously named promotion.

After posting a 10–3 record in RINGS, M-1, It’s Showtime, and 2 Hot 2 Handle, Overeem debuted in the Pride Fighting Championships on 20 July 2002, defeating Yusuke Imamura by TKO in just 44 seconds.

Overeem won two more fights in Pride before entering the 2003 Pride Middleweight Grand Prix at Pride Total Elimination 2003 and losing to future UFC Light heavyweight Champion Chuck Liddell in the quarterfinal match. Overeem rebounded to defeat Tomohiko Hashimoto at the Inoki Bom-Ba-Ye 2003 in 36 seconds. On 31 October 2004, Overeem fought Hiromitsu Kanehara, defeating him by TKO in the second round at Pride 28. Overeem lost his next fight against Brazilian Top Team fighter Antônio Rogério Nogueira.

In 2005, Overeem entered the Pride Middleweight Grand Prix at Pride Total Elimination 2005 where he defeatedUFC Light heavyweight Champion Vitor Belfort, by submission, in the opening round. Overeem would move on to fight Igor Vovchanchyn in the quarterfinals at Pride Critical Countdown 2005 taking under two minutes to win via submission. Overeem lost in the semifinals to the eventual champion Maurício Rua.

In February 2006, Overeem fought Russian Top Team favourite Sergei Kharitonov. Overeem won, dislocating Kharitonov’s shoulder in the process. With his win over Kharitonov, Overeem secured a spot in the PRIDE 2006 Openweight Grand Prix at Pride Total Elimination Absolute. He fought Brazilian jiu-jitsu specialist Fabrício Werdum, and lost via kimura in the second round.

After his loss, Overeem travelled to San Jose, California to rematch Vitor Belfort at Strikeforce: Revenge. Overeem won the fight by decision in the evening’s main event.

A month later Overeem returned to PRIDE for a highly anticipated rematch with Antônio Rogério Nogueira. Overeem entered the fight with a heavily taped neck. After controlling the first round and a half with his striking, Overeem was stumbled from a punch, and Nogueira followed with a flurry of strikes. Worried Overeem would be more severely injured, his corner threw in the towel.

At Pride Final Conflict Absolute, Overeem lost to Ricardo Arona. Overeem was on the receiving end of a leg kick that caused a non-serious injury to his nerves, causing him to lose feeling in his foot and leg. Unable to mount an offence or defend against Arona, Overeem tapped out to avoid further injury.

He then suffered another KO loss to Maurício Rua at Pride 33, but returned in June 2007 with a submission win over Michael Knaap at K-1 Grand Prix in Amsterdam (despite K-1 being a kickboxing promotion, the bout was fought under MMA rules).

On 17 September 2007, at the Hero’s 10: Middleweight Tournament Final, Alistair faced Sergei Kharitonov again.Overeem showed solid movement as soon as the first round began, but he suffered a KO loss just before the end of the first round.

On 16 November 2007, Overeem defeated Paul Buentello for the vacant Strikeforce Heavyweight Championship by submission due to knee strikes.[11] On 15 June 2008 Overeem won by KO in the first round against Lee Tae-Hyun at DREAM 4. On 21 July 2008, Overeem defeated K-1 World Grand Prix Champion Mark Hunt in the first round by submission at Dream 5: Lightweight Grand Prix 2008 Final Round.

His next fight was against Mirko Cro Cop at Dream 6 on 23 September 2008.[12] About halfway through a first round which saw Overeem take down Cro Cop multiple times and effectively strike from the top position, cutting his Croatian foe, the bout was stopped and declared a no contest due to Overeem landing multiple knees to the groin of Cro Cop.

Overeem was rumoured to make his first title defence against Brett Rogers on 6 June at Strikeforce: Lawler vs. Shields, however a hand injury scuttled plans for the fight.[13] According to Golden Glory manager Bas Boon, Overeem had suffered a hand infection following a nightclub brawl early May 2009. According to Boon, Alistair and his brother Valentijn – both heavyweights – had been involved in an altercation that left five security staff needing hospital treatment and nearly cost Alistair his hand.

Overeem was scheduled to make his first Strikeforce Heavyweight Championship defence in a rematch against Fabrício Werdum at Strikeforce: Carano vs. Cyborg, but had to pull out due to a hand injury, most likely caused from his nightclub brawl.

Overeem was set to face Andrei Arlovski at Dynamite!! 2009, but FEG instead opted to have him face Kazuyuki Fujita to keep with the DREAM vs. Sengoku theme.[16] Overeem quickly overpowered his opponent and recorded a knockout with a knee to the head.

Overeem next faced Brett Rogers on 15 May 2010 at Strikeforce: Heavy Artillery to defend his Strikeforce Heavyweight Championship.[17] He won the fight via TKO in the first round. In his post-fight interview, Overeem declared for another time that he wants to fight Fedor Emelianenko, claiming that Fedor’s management can no longer ignore his presence.[18] The majority of Alistair Overeem’s pre-fight training camp took place at the newly opened Golden GloryGym in Pattaya, Thailand, where “The Demolition Man” concentrated on the further improvement of his Muay Thai skills.[19]

Overeem faced Todd Duffee on 31 December 2010 at Dynamite!! 2010.[20] He defeated Duffee by way of knockout 19 seconds into the first round to win the interim DREAM Heavyweight Championship.[21]

In early 2011, Overeem was named as one of eight men that will take part of the Strikeforce Heavyweight Grand Prix, alongside Fabrício Werdum, Sergei Kharitonov, Brett Rogers, Josh Barnett, Andrei Arlovski, Antônio Silva and Fedor Emelianenko.

On 17 July, it was announced that Overeem was removed from the promotion’s 2011 Heavyweight Grand Prix. Overeem went on to state that he felt the September date was too soon for him to return, and that he needed time to rest and heal after his 18 June quarterfinal decision win over Fabrício Werdum. Overeem was swapped out for unbeaten up-and-comer Daniel Cormier.[24] Subsequently, on 29 July, it was announced that Overeem had been released from the Strikeforce organization as Zuffa exercised their right to eliminate the one remaining fight on his contract.[25][26] It was revealed that the reason behind Overeem’s release from Strikeforce was not due to his unwillingness to participate in the Grand Prix semifinals, but due to Golden Glory’s policy requiring that the money fighters made through fights be paid through their management first.

This disagreement led not only to Overeem’s release but also other Golden Glory stars under a Zuffa contract, including former Strikeforce Women’s Bantamweight Champion Marloes Coenen, Norwegian UFC Heavyweight Jon Olav Einemo, and even brother Valentijn Overeem. Team Golden Glory leader Bas Boon stated he has since changed the policy, and that Alistair Overeem could come to the UFC under an exclusive deal, if the right terms are offered, which he later received.[27]

After much speculation, on 6 September 2011, it was announced that Overeem had signed a contract with the UFC, and that his first fight would be against former UFC Heavyweight Champion Brock Lesnar on 30 December 2011 at UFC 141.[28][29]

The lead up to the fight was rife with controversy. In November 2011, both competitors were required by the NSAC to comply with out-of-competition drug testing. Lesnar delivered his sample screen on 21 November, while Overeem delivered his on 23 November. The screen, however, did not meet the standards of the commission. Overeem submitted a second test through his personal physician – which was also deemed unacceptable – before flying out of the country. Overeem was ultimately given a conditional license for the fight by the committee during a meeting held on 12 December 2011.[30]

On 30 December 2011, at UFC 141, Overeem made his UFC debut in the main event against Brock Lesnar. Overeem hurt Lesnar multiple times early on with knees to the body, and went on to finish the fight with a kick to the liver and subsequent punches at 2:26 of the first round. The victory earned him a heavyweight title shot against champion Junior dos Santos.

In 2009, Zabit Samedov accused Overeem, Errol Zimmerman and Badr Hari for steroid use during their fights.[31] His claims were supported by Badr Hari and Ruslan Karaev.[32]

Overeem was scheduled to fight UFC Heavyweight Champion Junior dos Santos on 26 May 2012 at UFC 146. However, on 4 April 2012, Overeem was revealed to have failed his pre-fight drug test by the Nevada State Athletic Commission (NSAC).[33] Overeem had a 14-to-1 testosterone-to-epitestosterone (T/E) ratio, over the allowed ratio rate of 6-to-1. On Friday 20 April 2012 UFC President Dana White confirmed that Overeem had been removed from his fight with dos Santos and replaced by Frank Mir.[34][35]

One day prior to his meeting with the NSAC, Overeem released a prepared statement to the media in which he claims the positive result of the drug test came as a result of a doctor prescribed “anti-inflammatory medication that was mixed with testosterone.”[36] Overeem’s lawyer filed a continuation request for additional time to gather support for his recent claim, which was voted on by the NSAC on 24 April 2012.[37] The request was denied and the NSAC voted unanimously to deny Overeem’s application status for a period of nine months, dating back to 27 March, the day of his drug test. He was allowed to reapply after this time period in December 2012.[38]

Overeem returned to face Antônio Silva on 2 February 2013 at UFC 156.[39] Leading up to the fight, Overeem was dismissive of Silva’s skills, claiming he was better than his opponent in every aspect of MMA.[40] Despite being a heavy betting favourite and having won rounds one and two, an overconfident Overeem lost to Silva by KO in the third round. After the fight it was revealed that Overeem actually had lower than normal T-E ratios.[41]

Overeem was expected to face former UFC Heavyweight Champion Junior dos Santos on 25 May 2013 at UFC 160.[42] However, in early March, Overeem pulled out of the bout citing an injury[43] and was replaced by Mark Hunt.[44]

For his third fight with the promotion, Overeem faced Travis Browne in the co-main event at UFC Fight Night 26 on 17 August 2013.[45] Overeem was dominant early in the fight, attacking Browne with a flurry of knees and punches. Browne recovered and defeated Overeem via TKO.

Overeem injured his elbow and decided to take the time out to have surgery, expecting to return in September 2014.[49] On 9 July, the UFC announced he would face Ben Rothwell on 5 September 2014 at UFC Fight Night 50.[50]Rothwell defeated Overeem via TKO in the first round.[51]

On 15 February 2016, Overeem announced that he had signed a new contract with the UFC.[56]

Overeem faced Andrei Arlovski on 8 May 2016 at UFC Fight Night 87.[57] He won the fight via TKO early in the second round.[58] Subsequently, he earned his first Performance of the Night bonus.[59]

Overeem faced Stipe Miocic for the UFC Heavyweight Championship on 10 September 2016 at UFC 203.[60] He lost the fight via knockout in the first round.[61] Both participants were awarded Fight of the Night honors.[62]

Overeem faced promotional newcomer Sergey Pavlovich on 24 November 2018 at UFC Fight Night 141.[71] He won the fight via TKO in the first round.[72]