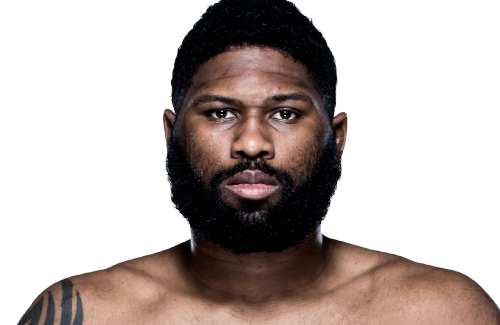 Blaydes was born in Naperville, Illinois and raised in nearby Chicago along with his four other siblings. He began wrestling for the De La Salle Institute, winning a state title his senior year while also compiling an undefeated 44-0 record. During his four years, Blaydes compiled an overall record of 95-18 with 121 takedowns. Blaydes also played football for De La Salle as a defensive end. He later earned a full wrestling scholarship to Northern Illinois University, where, despite going 19-2 as a redshirt freshman, later transferred to Harper College. At Harper, Blaydes won the NJCAA National Championship as a redshirt sophomore. After he began fighting in amateur mixed martial arts, Blaydes left school to focus on a career in MMA.[6]

Blaydes compiled an 8-0 amateur record before turning professional in 2014. He then went 5-0, with all wins via TKO, before being signed by the UFC.

Blaydes made his promotional debut against Francis Ngannou on April 10, 2016 at UFC Fight Night 86.[7] He lost the fight via TKO at the conclusion of the second round due to doctor stoppage.[8]

Blaydes next faced Cody East on October 1, 2016 at UFC Fight Night 96.[9] He won the fight via TKO in the second round,[10] winning his first UFC Performance of the Night bonus.[11]

Blaydes faced Adam Milstead on February 4, 2017 at UFC Fight Night 104.[12] After dominating action throughout the first round, Blaydes won the fight via TKO after Milstead sustained a knee injury.[13] Subsequently, the result was changed to a No Contest after Blaydes tested positive for marijuana.[14]

Blaydes faced Alexey Oleynik on November 4, 2017 at UFC 217.[17] He won the fight via TKO due to a doctor stoppage. The referee stopped the fight after Blaydes delivered an illegal kick to a downed opponent and called a doctor to check on Oliynyk. The fight was stopped due to the doctor’s advice. The replay, however, showed the strike did not deliver significant damage (as it only grazed the ear), and the fight was ruled a TKO win for Blaydes.[18]

Blaydes faced Francis Ngannou in a rematch on November 24, 2018 in the main event at UFC Fight Night 141[24] He lost the fight via TKO early into the first round.[25]