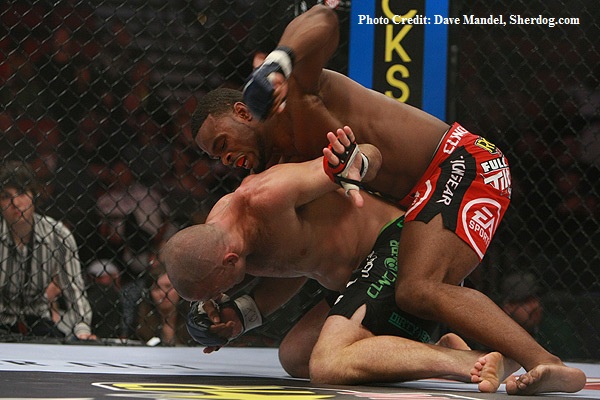 2012 Forecast:
Tyron Woodley has clearly proven himself to be the #1 contender in the Strikeforce welterweight division heading into 2012. Woodley was a 2-time All-American wrestling standout at Missouri University prior to making his transition to MMA in 2009. Woodley won his first two fights on the independent circuit before signing with Strikeforce later that same year. Woodley was a fixture on the Strikeforce Challengers series, winning his first 3 fights via submission. Woodley moved on to face veteran Nathan Coy, struggling to a split decision victory that had many questioning Woodley’s ability to compete against stiffer competition. Woodley proved he was up to the task though as he won his next 3 fights against Andre Galvao, and high-level strikers Tarec Saffiedine and Paul Daley. Woodley’s wins over Saffiedine and Daley were both criticized due to his propensity for taking the fight to the ground and not actively working for the finish. Nonetheless, Woodley is Strikeforce’s top welterweight in the division and he will likely fight for the vacant title in 2012. Woodley has solid power in his hands, but he lacks confidence in his striking at this point in his career. Similar to his collegiate wrestling teammate Ben Askren, Woodley’s wrestling is good enough to defeat most opponents, so why risk changing what currently wins him fights.