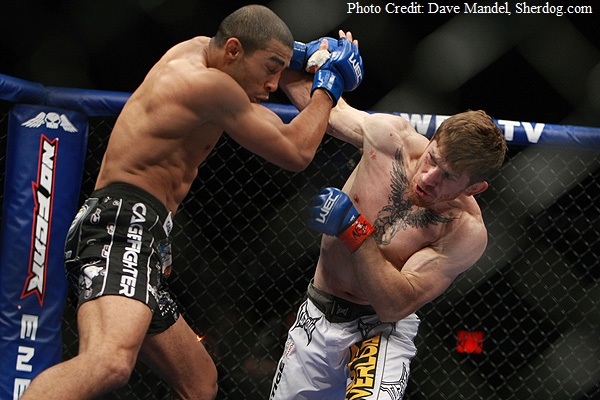 Background:
Mike Brown ruled the WEC featherweight division for over a year during his title reign, eventually losing the title to Jose Aldo in 2009. Brown’s career dates back to 2001, as he traveled around the world looking to solidify himself as one of the top fighters in the world. Brown even fought for the UFC in 2004 as a lightweight, losing to Genki Sudo. Brown would eventually land in the WEC following a 6-fight win streak on the independent circuit. Brown scored a unanimous decision victory in his 2008 WEC debut before moving on to face reigning champion Urjiah Faber at WEC 36. Brown was able to score a stunning 1st round TKO victory to become the new WEC featherweight champion. Brown successfully defended his title twice, defeating Leonard Garcia and Faber for the second time. Brown ended up putting his title on the line against Brazilian knockout artist Jose Aldo, losing via 2nd round TKO. Brown has struggled ever since losing the title, going just 3-3 overall and hinting towards retirement.

2011 Breakdown:
Brown had an abysmal 1-2 record in 2011 continuing his downward spiral.
Brown faced Diego Nunes at UFC 125 and despite winning the fight early on seemed to gas out. Brown ultimately lost the fight in a very close split decision.
Brown was still upset following the close loss to Nunes and agreed to step in for an injured Chang Sung Jung only 3 weeks after he had competed at UFC 125. Brown faced BJJ ace Rani Yahya at UFC Fight Night 23, losing another tough decision. It was a close fight, but Yahya was able to control most of the ground game dropping Brown’s overall UFC record to 0-3.
Brown returned to face Nam Phan at UFC 133 and was finally able to win his first UFC fight, dominating the 1st round before hanging on to win a unanimous decision.

2012 Forecast:
Brown is 36 years old, and his days as a top contender look to be numbered. Brown still has knockout power in his right hand and solid wrestling, but his conditioning has seemed to drop off over the last couple of years. Brown can still be an effective gatekeeper, but in a thin featherweight division he has a real chance to jump back into the title picture with a couple of big wins. Brown has struggled as of late with injuries and needs to learn to pace himself in fights. His opponents have figured out how to stay away from his big right hands, so Brown needs to find ways to adjust his own gameplan in order to consistently win.