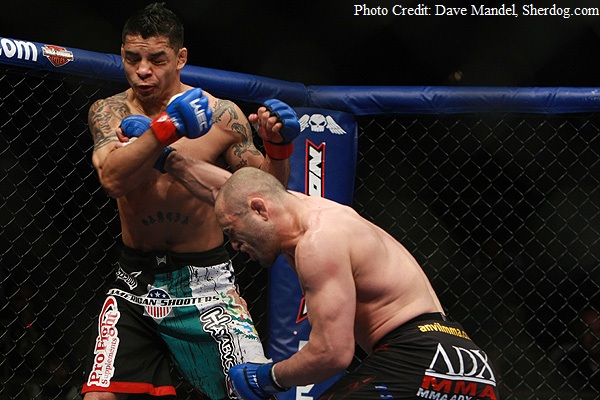 Background:
Manny Gamburyan gained notoriety for being a TUF 5 finalist and WEC featherweight title contender. Gamburyan, cousin to former UFC fighter Karo Parisyan, began his career in 1999 racking up a 6-1 record, including a knockout victory over Jorge Santiago. Gamburyan’s only loss during this time was to former UFC lightweight champion Sean Sherk. Gamburyan would struggle with injuries, being sidelined for nearly 3 years before returning for The Ultimate Fighter 5. Gamburyan was considered an underdog throughout the filmings due to his lack of size, but quickly impressed viewers by defeating Matt Wiman and Joe Lauzon, earning him a spot in the finals opposite Nate Diaz. Gamburyan would lose the closely contested fight when his shoulder popped out of place. Gamburyan would win his next two UFC fights before losing to Rob Emerson and Thiago Tavares, which prompted his transfer to the WEC and its featherweight division. Once in the WEC, Gamburyan ran up a 3-fight win streak, including a huge knockout of former WEC featherweight champion Mike Brown. The win over Brown propelled Gamburyan into a title fight with reigning champion Jose Aldo. Aldo dominated the fight, winning via knockout in round 2. Gamburyan returned to the UFC in 2011, but lost consecutive decisions to Tyson Griffin and Diego Nunes.

2011 Breakdown:
Gamburyan went 0-2 in 2011 losing two close decisions.
Gamburyan was initially set to face Raphael Assuncao at UFC 128, but Gamburyan was forced off the card due to injury.
Gamburyan finally made his UFC return against Tyson Griffin at UFC on Versus 4, but lost a tough decision. Gamburyan started out strong, but faded down the stretch as Griffin narrowly earned the judges’ decision.
Gamburyan moved on to face Diego Nunes at UFC 141. Gamburyan and Nunes took part in a back-and-forth contest, but Nunes proved to be the more versatile fighter landing the more effective offense in the final round as Gamburyan’s pace slowed. Gamburyan once again lost a close decision.

2012 Forecast:
Gamburyan is mired in a slump following 3 straight losses. Gamburyan is still considered a dangerous fighter because of his knockout power, but swinging for the fences has also taken its toll on Gamburyan’s conditioning. Gamburyan is as thick as they come, though he is still considered one of the shortest featherweights. Gamburyan should make the cut to 135 where his physical limitations may be less obvious there. The likelihood of that happening is very slim at this stage in Gamburyan’s career. Gamburyan would be wise to start integrating more of his judo game into his fights in order to pace himself, but as mentioned his lack of size interferes with him being able to get the necessary leverage for scoring takedowns or throws. Gamburyan is not in a must-win situation to save his roster spot going into his next fight, but his legitimacy as a contender has definitely taken a hit over the last year.