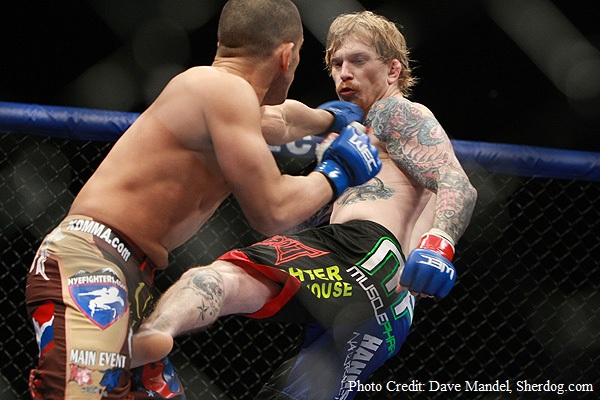 Background:
Bart Palaszewski, originally from Poland, made an instant impression on UFC fans with a 1st round knockout of Tyson Griffin at UFC 137. Palaszewski has been in the fight game for a long time, amassing 50 fights at just 28 years of age. Following an 0-4 start, Palaszewski’s career caught fire, winning 26 of his next 29 fights, mostly competing as a lightweight. Palaszewski also gained notoriety for his 2-fight showdown with Chris Horodecki. After an 8-4 run in the IFL, Palaszewski moved on to the WEC in 2008, defeating Alex Karalexis via TKO in his debut. Palaszewski struggled in his next two fights, losing to Ricardo Lamas and Anthony Njokuani. Palaszewski won a fight on the independent circuit before returning to the WEC in 2009 where he faced fast-rising prospect Anthony Pettis. Palaszewski pulled off a split decision victory that could have gone either way. Bartimus won two more fights before losing to Kamal Shalorus via decision at the final WEC fight card. Palaszewski sat idle for nearly a year before debuting in the UFC as a featherweight. Palaszewski faced off against veteran contender Tyson Griffin, pulling off the stunning knockout for his biggest career victory.

2011 Breakdown:
Palaszewski’s status as a UFC fighter was in question following the WEC’s demise, but Palaszewski finally got the call to face Cody McKenzie at UFC 130. McKenzie soon was forced off the card with an injury, ultimately being replaced with Brazilian Gleison Tibau. Two weeks later, Palaszewski was forced to withdraw himself citing an injury.
Upon his return, Palaszewski would make his debut as a featherweight against Tyson Griffin at UFC 137. Griffin may have come into the bout overconfident, as he missed weight and was then knocked out in the very 1st round.

2012 Forecast:
Palaszewski resurrected his career from journeyman to possible title contender in just one fight. Palaszewski’s wrestling limitations are well known, but if he can continue to be matched up against strikers, he has a shot to make a run in the division. Palaszewski has heavy hands and a solid motor. Palaszewski has struggled with consistency for much of his career, but now seems to have a golden opportunity in front of him as he looks to rise through the UFC featherweight ranks.