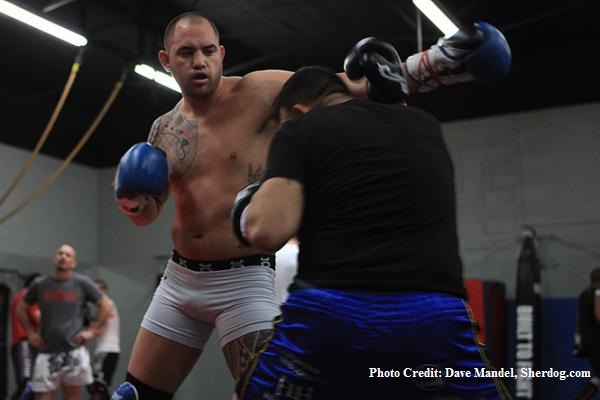 Background:
Travis Browne is a rising prospect in the UFC heavyweight division. Browne made his mixed martial arts debut in 2009, winning his first 9 fights on the independent circuit, highlighted by a knockout victory over TUF 10 alum Abe Wagner. Browne signed with the UFC in 2010, making a successful debut at the TUF 11 Finale by stopping James McSweeney via strikes in the 1st round. Browne would take a big step up in competition as he faced off against fellow striker Cheick Kongo at UFC 120. Both men struggled throughout the fight to let their hands go and following a Kongo point deduction, the fight was ruled a draw. Browne bounced back from the draw by knocking out Stefan Struve in impressive fashion to earn Fight of the Night honors at UFC 130. Browne moved on to face Rob Broughton at UFC 135 in what was thought to be a showcase fight for Browne’s skills. Though Browne dominated most of the fight, he struggled with his conditioning, unable to finish Broughton and having to settle for a unanimous decision victory.

2011 Breakdown:
Browne fought twice in 2011 as he continued to extend his undefeated streak to 13 fights.
Browne faced fellow prospect Stefan Struve at UFC 130 in a battle of two of the UFC’s tallest fighters. Both men came out looking for big strikes early. Browne was the initiator while Struve looked to counter. Browne briefly secured the takedown, but quickly decided to stand up knowing Struve’s submission skills. Struve nearly caught Browne in a triangle before Browne finally backed away completely. Struve got back to his feet and as he came forward, Browne dropped him with a big right hand. Browne threw a couple of unnecessary punches before the referee stepped in and stopped the fight.
Browne moved on to face Rob Broughton at UFC 135. This looked to be a showcase fight for Browne entering the fight. Browne immediately flashed his quickness and speed advantage over Broughton by bouncing around on the outside, looking to land strikes. Broughton scored with a couple of leg kicks, but Browne controlled the round with his striking before securing a takedown and jumping right into full mount. Browne began firing off punches, but the round came to a close. The 2nd round started out slowly as both men looked to be tiring. Browne finally pushed forward landing a few strikes, but Broughton was able to largely avoid any big shots. Browne once again shot in for the takedown and got full mount as the 2nd round came to a close. Browne looked to have the fight in the bag, but was struggling to finish Broughton. In the 3rd round, Broughton scored his best punch of the fight, a right hand, but Browne was ultimatelye able to take Broughton down and eventually move to full mount. The fight finished on the floor as the crowd voiced their disapproval for the lack of action. Browne took home a unanimous decision victory.

2012 Forecast:
Travis Browne is without question one of the top prospects in the UFC heavyweight division. Once Browne begins to utilize all of his physical skills he looks to be a force to be reckoned with. Browne has power in his hands, but at times has struggled to let his hands go. His conditioning is also a bit of a question mark as he has struggled in the later rounds of each of his fights that have went to decision. Browne has flashed some decent wrestling ability, but he doesn’t seem overly confident going to the ground. He simply lacks cage time to develop his overall comfortability fighting in different positions. Browne is still under 30 years old and if he can continue to develop his skills under new trainer Greg Jackson, Browne could be a serious contender in the heavyweight division.