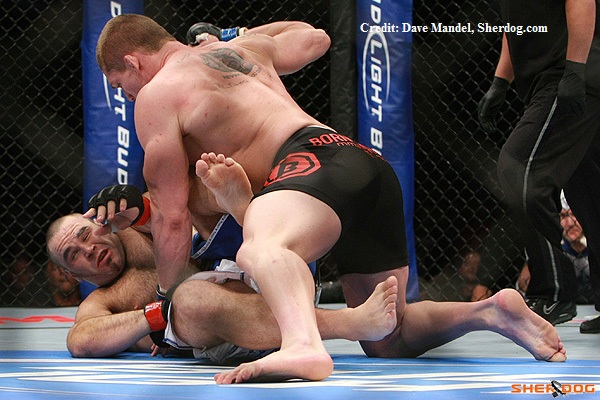 2012 Forecast:
Todd Duffee seemed like a sure-fire future contender in the UFC heavyweight division. He was athletic, young, skilled, and intimidating. His UFC debut against Tim Hague was one of the most impressive knockouts in UFC history and the sky seemed to be the limit for the brash talent. Duffee may have let the hype get to his head though as he seemed to be chasing a potential movie career rather than working on his overall fight game.

Duffee’s career took a sobering turn as he faced off against Mike Russow at UFC 114. Duffee hit Russow with everything, but the kitchen sink, yet Russow would not fall. Duffee got a little too confident in the final minutes of the fight and paid for it dearly as Russow knocked Duffee out in highlight-reel fashion. Duffee was released a few months after the loss for reasons unknown, though attitude concerns were hinted. Duffee’s career continued to spiral downward as he was knocked out in the 1st round of his fight with Alistair Overeem after taking the fight on extremely short notice.

Duffee did not fight in 2011, which may have been one of the wisest decisions possible. He is supposedly training at American Kickboxing Academy, which looks to be an ideal location for Duffee to become a true professional and possibly reach his massive potential. Duffee is fully capable of being a top contender in the UFC or Bellator and will hopefully be given the opportunity to prove that in the coming years.