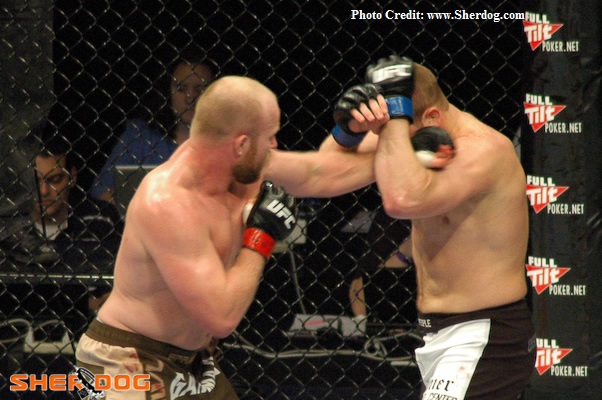 Background:
Tom Boetsch is a powerful middleweight that recently joined the 185 lbs. division following a mixed 3-3 run at light heavyweight. Boetsch wrestled collegiately at Lock Haven University before making his way to mixed martial arts in 2006. Boetsch won his first 6 fights on the independent circuit, all via finish before signing with the IFL in 2007. Boetsch ended up losing his debut to veteran Vladimir Matyushenko via decision before the company was eventually folded. Boetsch moved on to fight in the UFC in 2008 as he debuted against striker David Heath at UFC 81. Boetsch was able to overpower Heath throughout the fight, before finishing him off via 1st round TKO. Boetsch’s next fight was not as successful as he faced off against TUF 3 alum Matt Hamill. Boetsch’s conditioning faded in the 2nd round as Hamill was ultimately able to score the 2nd round TKO. Boetsch bounced back with a win over Michael Patt before struggling against wrestler Jason Brilz at UFC 96 where he would lose via unanimous decision. Boetsch was cut from the UFC following shortly thereafter. Boetsch returned back to the independent circuit where he won 3 straight fights to eventually earn a spot back in the UFC in 2010. Boetsch defeated Todd Brown at UFC 117, but was unable to keep the momentum going as he lost via submission to rising prospect Phil Davis at UFC 123. Following the loss, Boetsch decided to cut down to 185 lbs. where he would immediately become one of the strongest fighters in the middleweight division. Boetsch did not disappoint as he defeated Kendall Grove and Nick Ring in 2011 to cement his status as a rising contender in the UFC middleweight division.

2011 Breakdown:
Boetsch fought twice in 2011, winning both fights as he made his transition down to the middleweight division.
Boetsch made his middleweight debut against TUF 3 winner Kendall Grove at UFC 130. Boetsch’s weight cut immediately paid dividends as he bullied Grove against the cage, repeatedly taking Grove down or tying him up in the clinch. Grove tried to threaten with submission attempts from the bottom, but he was unable to score any significant offense as Boetsch went on to win via unanimous decision.
Boetsch moved on to face undefeated TUF 11 alum Nick Ring at UFC 135. Boetsch was once again the stronger fighter as he controlled the fight’s pace and action. Ring tried to establish his jab, but Boetsch made it a non-factor as he continually pushed forward with strikes and takedowns. Boetsch once again won via unanimous decision.

2012 Forecast:
Boetsch looks to be a new contender in the middleweight division. High-level wrestlers have given Boetsch problems in the past, so it will be interesting to see how he fairs against the likes of Sonnen, Okami, or Munoz. Boetsch does not have elite athleticism, but has freaky strength and is fully capable of out-working his opposition. Boetsch will have to continue and develop his finishing skills and striking in order to make a run at the title, but he certainly has a chance at making a run in the division.