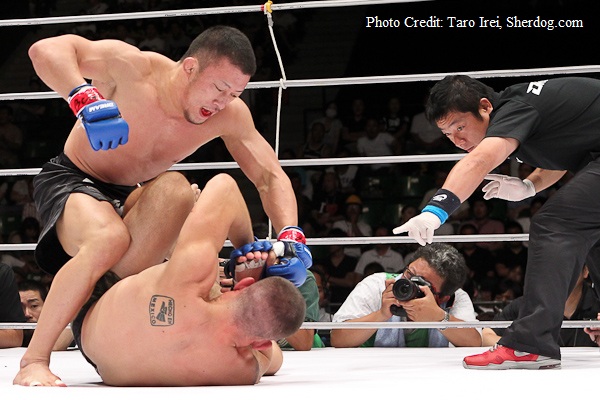 2012 Forecast:
Tatsuya Kawajiri made his featherweight debut in 2011, which has breathed new life into the Japanese star’s accomplished MMA career. Kawajiri made his mixed martial arts debut way back in 2000. “The Crusher” went 13-2-2 in the Shooto promotion, where he won their welterweight (154 lbs.) championship by avenging a previous loss to Vitor “Shaolin” Ribeiro. Kawajiri brought his talents over to PRIDE, winning his first 2 fights before squaring off with future PRIDE champion Takanori Gomi in the PRIDE 2005 lightweight Grand Prix. Kawajiri showed a ton of heart absorbing Gomi’s big punches, but he was eventually forced to submit. Kawajiri won his next 4 fights before losing a hard-fought decision to Gilbert Melendez. Kawajiri picked up a win over Luiz Azeredo before making his way into Dream’s 2008 lightweight Grand Prix. Kawajiri defeated Kultar Gill and Luiz Firmino to reach the semifinals, before ultimately losing to Eddie Alvarez via TKO in a back-and-forth fight. Kawajiri bounced back by winning his next 4 fights, including victories over J.Z. Cavalcante and Kazunori Yokota to set up a Dream lightweight championship match against fellow Japanese lightweight contender Shinya Aoki. Kawajiri was forced to submit just minutes into the fight. Kawajiri moved on to win a unanimous decision over Strikeforce’s Josh Thomson to set up a title bid against reigning Strikeforce lightweight champion Gilbert Melendez. Kawajiri struggled throughout as Melendez easily finished him via 1st round TKO. Kawajiri competed once more as a lightweight, defeating Drew Fickett, before announcing his move down to the featherweight division. Kawajiri showed it was a wise move by submitting Joachim Hansen and Kazuyuki Miyata in consecutive fights.
Kawajiri at featherweight should be a force. He was already a powerful lightweight and as long as his gas tank holds up, he should even be better at 145 lbs. Kawajiri’s possible move to the UFC or Bellator is questionable as he supposedly does not like to fly. With a lack of viable featherweight title contenders for Jose Aldo, the UFC may make the move to bring Kawajiri into the fold. Kawajiri has the skills to possibly be the best featherweight in the world by countering Aldo’s striking with his own wrestling and submissions.