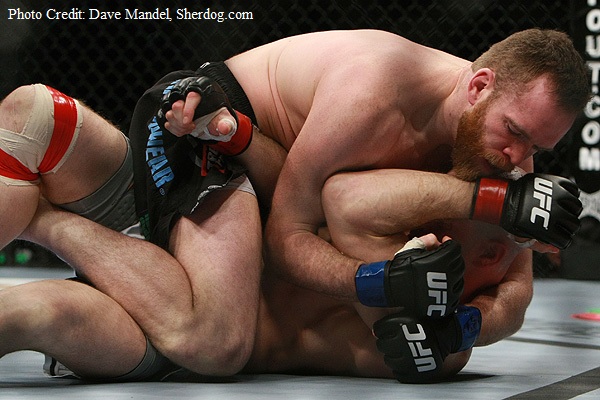 Background:
T.J. Grant moved down to the UFC’s lightweight division in 2011 after going 3-3 as a welterweight. Grant made his official MMA debut in 2006, quickly solidifying himself as one of the top fighters in Canada. Grant went 13-2 overall, defeating former UFC veterans Forrest Petz and Chad Reiner to earn his ticket to the UFC in 2009. Grant faced Japanese veteran Ryo Chonan in his debut, narrowly winning a split decision. Grant was outwrestled in his next fight, losing via decision to Dong Hyun Kim at UFC 100. Grant bounced back by scoring a TKO victory over Kevin Burns before moving on to face rising contender Johny Hendricks. Grant lost a razor-thin decision, though he nearly scored the upset before fading down the stretch. Grant rebounded with a decision win over Julio Paulino before losing to Ricardo Almeida in his final bout as a welterweight. Grant made his move down to the lightweight division, making him one of the biggest lightweights competing in the division. Grant showed that his move to a new weight class was a wise one, defeating Shane Roller via 3rd round submission.

2011 Breakdown:
Grant went 1-0, making a successful debut at lightweight.
Grant was initially set to fight once more at welterweight against Matt Riddle. Riddle was forced off the card and replaced by Charlie Brenneman. Brenneman was called in last second as an injury replacement for Nate Marquardt leaving Grant with no opponent and the fight was ultimately scrapped.
Grant made his official drop down to lightweight where he faced off against WEC veteran Shane Roller at UFC Live 6. Grant quickly showed his move to lightweight was a wise decision as he controlled Roller with takedowns and top control, winning the first 2 rounds before catching Roller with an armbar for the 3rd round submission finish.
Grant was set to face Jacob Volkmann at UFC 141, but withdrew due to an injury.

2012 Forecast:
Grant’s wrestling and submission skills make him another tough addition to the UFC’s deep lightweight division. Grant previously struggled with stronger wrestlers and he noticeably tired down in the later rounds of close fights. Grant looked like a legitimate force as he out-worked Shane Roller. Grant still lacks a signature victory on his resume, but if can continue to evolve as a striker, he has a chance to make a solid run in the division.