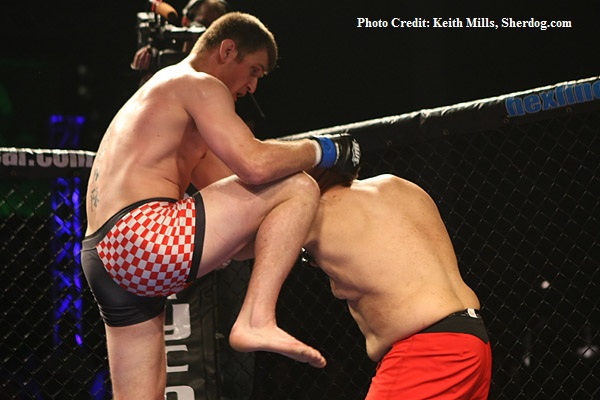 Background:
Stipe Miocic is one of the top prospects in the UFC heavyweight division. Miocic wrestled collegiately at Cleveland State University before making his way to mixed martial arts in 2010. Miocic quickly made himself known by winning his first 6 fights on the independent circuit, finishing each fight with strikes. Miocic signed with the UFC in 2011. In his UFC debut, Miocic faced off with brawler Joey Beltran at UFC 136. It was a big step up in competition for Miocic and he struggled at times to combat Beltran’s toughness. Miocic went on to win a unanimous decision, extending his undefeated streak to 7.

2011 Breakdown:
Miocic fought 3 times in 2011, winning all 3 fights including his UFC debut.
Miocic defeated William Penn and Bob Brents, dominating each opponent with his striking. Miocic signed with the UFC later in the year.
Miocic made his UFC debut against Joey Beltran at UFC 136. Miocic started out strong, scoring some solid leg kicks before taking Beltran down to the floor. Beltran worked his way back up, but was struggling to find his range. Miocic continued to score with single strikes including a solid right hand. In round 2, Beltran came out aggressively, trying to make the fight a brawl. They exchanged takedowns before returning to their feet. Beltran tried pushing forward, but Miocic took the fight to the floor. Beltran got back to his feet and they began to trade strikes from the clinch with each fighter doing some damage. Miocic looked to be tiring down going into the 3rd round. Miocic tried to shoot for the takedown, but Beltran stuffed it. Miocic tried again, this time taking Beltran down and taking his back. Beltran muscled his way back up to his feet as they began trading big strikes. Miocic once again scored a takedown, moving to full mount. Beltran gave up his back and Miocic looked to lock on the rear-naked choke, but the final horn sounded. Miocic won the fight via unanimous decision.

2012 Forecast:
Stipe Miocic was hyped as one of the next big things in the UFC heavyweight division. His UFC 136 debut left a lot of fans wondering what all of the fuss was about. Miocic’s wrestling is considered to be at a high level, though he has proven to be more of a striker since making his MMA debut in 2010. Miocic has blown threw most of his overmatched competition in his limited amount of cage time. He’s not quite ready for the elites of the division, but he should be able to hold his own against some of the UFC mid-level fighters as he gathers more experience. Miocic seems to have the physical tools on paper to be a future title contender in the division.