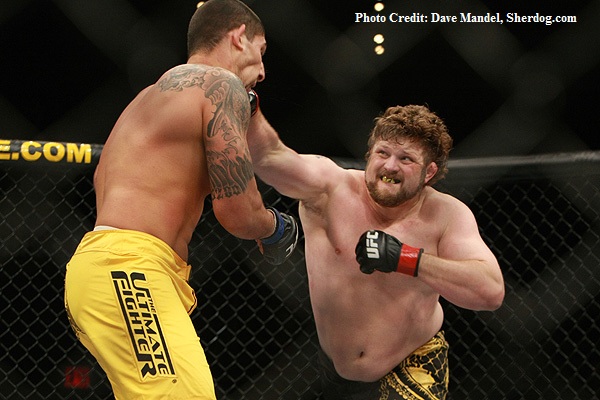 Background:
Roy Nelson was the season 10 winner of The Ultimate Fighter. Nelson, known for his unathletic and burgeoning belly, parlayed his grappling talents into a solid mixed martial arts career, officially making his debut in 2004. Nelson mounted a 6-0 record before bouncing around between the Bodog and IFL promotions. Nelson went 1-1 in Bodog, defeating Mario Rinald while losing his first career fight to Josh Curran via decision. Nelson would fare much better in the IFL, going 6-1 with his only loss coming via close, split decision to Ben Rothwell. Nelson won the IFL heavyweight championship, defending it twice before moving on to face Andrei Arlovski in the EliteXC promotion. Nelson was more than holding his own as he had Arlovski in danger on the ground, but following a questionable standup by the referee, Arlovski roared back to win via 2nd round knockout. Nelson moved on to face fellow grappler Jeff Monson, losing via unanimous decision. Nelson would eventually make his way to The Ultimate Fighter 10, instantly being considered the runaway favorite for the show. Though Nelson’s commitment and conditioning were questioned during the show, he went on to defeat Kimbo Slice, Justin Wren, and James McSweeney to earn a spot in the finals opposite Brendan Schaub. In the Finale, Nelson knocked Schaub out with his big right hand to earn him the 6-figure contract. Nelson faced Stefan Struve in his first post-TUF bout, once again scoring a 1st round knockout. Nelson was put to the test in his next fight as he faced off against rising contender Junior Dos Santos at UFC 117. Dos Santos battered Nelson with strikes, but Nelson gamely hung in there for all 3 rounds, ultimately losing via unanimous decision. Nelson would remain on the sidelines for over 9 months before making his return against Frank Mir at UFC 130. Nelson struggled throughout the fight as his lack of conditioning and size came back to haunt him, once again losing via one-sided unanimous decision. Nelson was possibly facing his UFC release should he lose his next fight to PRIDE legend Mirko Cro Cop at UFC 137. Nelson struggled early, but eventually finished Cro Cop in the 3rd round via TKO. Despite calls for him to move down to 205 lbs., Nelson has vowed to continue and fight on as a heavyweight.

2011 Breakdown:
Nelson fought twice in 2011, splitting bouts between legends Mirko Cro Cop and Frank Mir.
Nelson was originally set to face Shane Carwin at UFC 125, but the fight was scrapped due to a Carwin injury.
Nelson eventually made his return against Frank Mir at UFC 130. Nelson tried to work from the clinch early as both men fought for position along the fence. Mir began getting the best of the inside striking with some solid knees to the body. Mir scored a takedown towards the end of the round, taking full mount for a few seconds. In the 2nd round, they returned to the clinch where Mir again landed a couple of takedowns. Nelson got back to his feet each time, but he was noticeably exhausted as the round came to a close. The 3rd round was all Frank Mir as Nelson had nothing left in the tank. Mir scored a takedown and landed some solid elbows, but Nelson was able to survive to the final horn. Nelson lost via unanimous decision and was publicly criticized by Dana White for his poor performance.
Nelson looked to redeem himself against Mirko Cro Cop at UFC 137, in what Cro Cop announced as his final fight in the UFC should he lose. Nelson scored a takedown early in the round, but could not keep Cro Cop down for long. They exchanged strikes for the remainder of the round with Cro Cop landing some solid shots, though Nelson answered with a big right hand. In the 2nd, Nelson scored with an early right hand, but Cro Cop surged back with big strikes. Nelson eventually worked for the takedown and trapped Cro Cop in the mounted crucifix as he pounded away with ground ‘n’ pound until the round’s end. The end came in the 3rd round as Nelson landed a right hand before taking Cro Cop down. Nelson took Cro Cop’s back and started landing punches that forced the referee to stop the fight.

2012 Forecast:
Roy Nelson’s career is at a crossroads coming into 2012. His fat-man act initially appealed to fans during his run on TUF 10, but he has recently come under fire for his lackluster performances in the octagon. Nelson may have the best chin in all of the UFC, considering he stood and traded with Junior Dos Santos for 3 rounds. What Nelson doesn’t have though, are the physical skills to compete with the elites of the heavyweight division. The UFC, fans, and fellow fighters have all voiced their opinions that Nelson would be better suited fighting as a light heavyweight. Nelson has refused to drop down a weight class thus far and at 35 years old is running out of time to make any significant run at a UFC title. Nelson’s overall skills are excellent. He is talented on the ground and has power in his hands. In the heavyweight division though, his skills are stifled by his lack of reach, mobility, and size. Hopefully, Nelson truly considers making a cut to 205 lbs. in 2012, otherwise he will continue to be a middle of the road heavyweight.