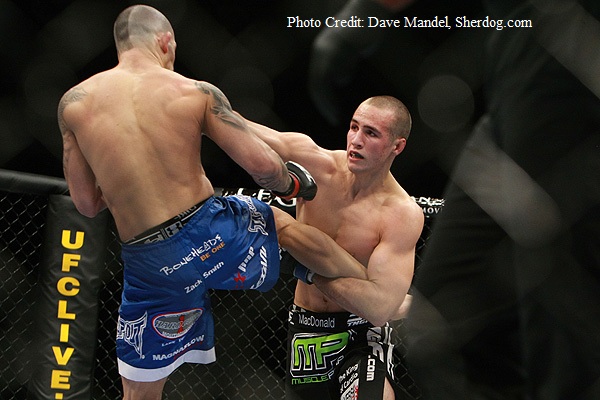 Background:
Rory MacDonald may be considered the top prospect in the UFC following a dominant 2011 year. MacDonald began competing professionally in 2005 at just 16 years of age. He quickly showed that he was a force to be reckoned with going 9-0 overall on the Canadian independent circuit, highlighted by victories over Jordan Mein, Kajan Johnson, and Clay French. MacDonald signed with the UFC in 2010, quickly finishing veteran Mike Guymon via 1st round submission in his UFC debut. MacDonald moved on to face his stiffest challenge to date in former WEC champion Carlos Condit at UFC 115. MacDonald was likely on his way to scoring the huge upset victory until Condit came alive in the final round to finish MacDonald via strikes with only seconds remaining in the fight. MacDonald returned from his crushing defeat to knock off Nate Diaz and Mike Pyle in impressive fashion. MacDonald now is on the cusp of title contention and looks primed for superstardom. MacDonald trains alongside current UFC welterweight champion Georges St.Pierre.

2011 Breakdown:
MacDonald went 2-0 in 2011 continuing his rise up the ranks in the UFC’s welterweight division.
MacDonald returned after a 10-month hiatus against TUF 5 winner Nate Diaz at UFC 129. MacDonald continued to show off his impressive skill-level, matching strikes with Diaz. Diaz was unable to use his boxing as MacDonald continually overpowered Diaz in the clinch and made him fight from close quarters. It was fairly even through the first 2 rounds, but in the 3rd, MacDonald exploded with some huge slams that sealed up the win via unanimous decision.
MacDonald moved on to face veteran Mike Pyle at UFC 133. Pyle had just pulled off an upset win over prospect John Hathaway and was looking to do the same against MacDonald. Pyle soon found out that MacDonald was no ordinary prospect. Pyle tried to take MacDonald down early, but had little luck in keeping him there. MacDonald eventually got Pyle to the ground where he pounded him out with strikes for the 1st round TKO victory.
MacDonald was scheduled to face Brian Ebersole at UFC 140, but he was pulled off the card due to an injury.

2012 Forecast:
The sky is the limit for Rory MacDonald. Most fans and experts are of the same opinion that MacDonald will one day become a UFC champion. MacDonald has trained under the tutelage of current champion GSP, and will likely bide his time as a top contender until GSP retires or moves divisions. MacDonald has passed every test with flying colors thus far. Some may argue that his fight with Carlos Condit exposed MacDonald’s lack of seasoning, but it only seemed to fuel MacDonald’s fire even more. MacDonald has yet to face a high-level wrestler, but that time is likely on the horizon as MacDonald enters the thick of the UFC welterweight Top 10.