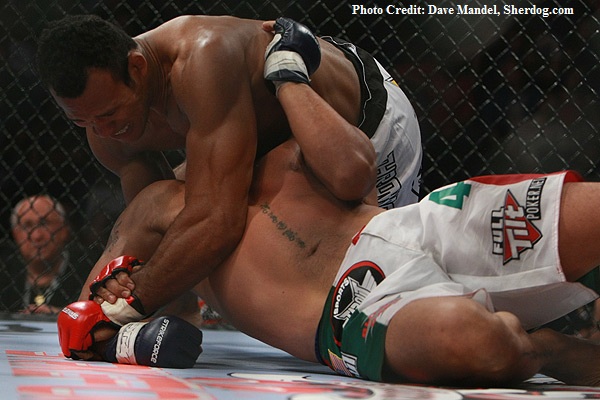 2012 Forecast:
Ronaldo “Jacare” Souza was one of the top BJJ practitioners in the world before turning his attention to MMA in 2003. Jacare lost his MMA debut to Brazilian legend Jorge Patino, but soon found success, winning his next 10 fights, including victories over Alexander Shlemenko and Jason “Mayhem” Miller. Souza would vie for the vacant Dream middleweight championship, but lost due to a well-timed upkick from Gegard Mousasi. Following a controversial rematch against “Mayhem” Miller that ended in a no-contest, Jacare made his way to Strikeforce where he continued to show off his improvements as a striker. Jacare’s striking was noticeably improved as he racked up wins over Matt Lindland and Joey Villasenor. Jacare went on to win the vacant Strikeforce middleweight championship by defeating Tim Kennedy in a hard-fought decision. He successfully defended his belt by choking out Robbie Lawler before suffering a close decision defeat to Luke Rockhold.
Jacare was truly coming into his own before his loss to Rockhold and now seems to be lost in the shuffle of Strikeforce’s questionable future. Jacare has the skills to be an immediate contender in the UFC middleweight division. His chin will always be a question mark, but he has proven that he knows how to fight through adversity. Should Souza not move to the UFC, he deserves another opportunity to win back his Strikeforce title considering how close his loss was to Rockhold.