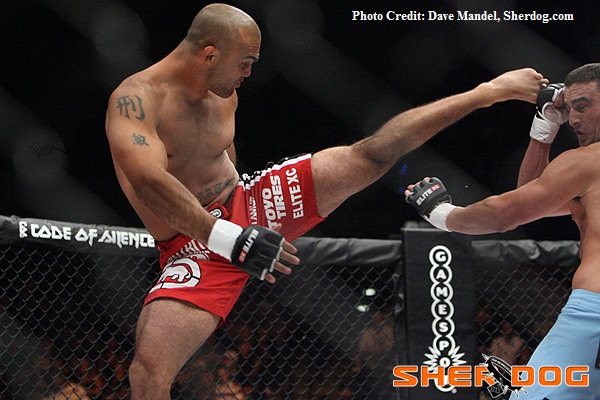 2012 Forecast:
Robbie Lawler will always be known for his knockout power, but his lack of ground skills have always held him back from the lofty expectations most held for the once prized prospect. Lawler entered the UFC just a few days after his 20th birthday, winning his debut in a wild slugfest with veteran Aaron Riley. Lawler followed that up with two devastating knockouts of Steve Berger and Tiki Ghosn that had him rapidly moving up the welterweight ladder. Lawler stumbled though as he failed to defend the leg kicks thrown by Pete Spratt, eventually being unable to continue due to injury. Lawler bounced back with an exciting back-and-forth war with Chris Lytle. Lawler moved on to face ground specialist Nick Diaz, but Diaz surprisingly showed a willingness to stand and bang with Lawler. Lawler swung his wild haymakers, which left him wide open for a perfectly placed counter punch by Diaz that knocked Lawler out. Lawler moved up to middleweight in his next UFC fight, losing via submission. It would be the last time Lawler would fight in the UFC as he was released. Lawler bounced around various promotions where he compiled a 6-1 record from 2005-2007, including knockout victories over veterans Niko Vitale, Joey Villasenor, Eduardo Pamplona, and Frank Trigg. His only loss during that time was to Jason “Mayhem” Miller via submission. Lawler’s stock was at an all-time high as he chose to sign with EliteXC. Lawler scored a knockout victory over Murilo “Ninja” Rua to win the EliteXC middleweight championship, successfully defending it against Scott Smith. EliteXC went out of business and Lawler moved on to Strikeforce. He lost his debut to Jake Shields via submission before rebounding with a thrilling knockout of Melvin Manhoef. Strikeforce strangely booked Lawler to face Renato “Babalu” Sobral in a catchweight fight that had little meaning for both fighters regarding title contention. Lawler lost the fight via decision. Lawler got back to his knockout ways by brutally finishing Matt Lindland in the 1st round. Lawler was rewarded with a title shot against reigning Strikeforce middleweight champion Ronaldo “Jacare” Souza. Lawler had Souza rocked at one point, but Lawler’s takedown and submission defense once again failed him as he was choked out in the 3rd round. Lawler lost his next fight as well, struggling to let his hands go against Tim Kennedy.
Lawler, when booked correctly, is one of the most vicious knockout strikers in the sport. He has proven that time and time again when paired against fellow strikers. Lawler has no business competing in Strikeforce as there are few fights left for him that make any sense. Lawler’s exciting style would be a welcome commodity in the UFC. He will likely always fall short of title contention due to his ground game, but he would have as good a shot as any of challenging UFC middleweight champion Anderson Silva on the feet.