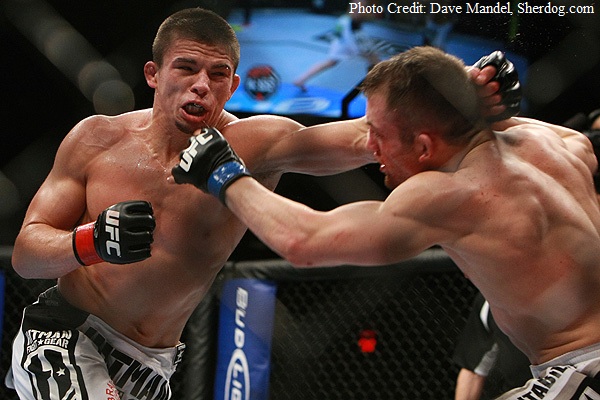 Background:
Rick Story compiled a 6-fight win streak over the course of 2010-2011 making him one of the top prospects to watch in the UFC welterweight division. Story began his mixed martial arts career in 2007, struggling to a 1-2 overall record, though his losses came to future UFC veteran Mario Miranda and Nathan Coy. Story finally started to finding success, rattling off a 6-fight win streak on the independent circuit, including wins over veterans Jake Ellenberger and Ryan Healy. Story signed with the UFC in 2009 making his debut against English prospect John Hathaway. Story lost via unanimous decision as he struggled to overcome Hathaway’s size and superior conditioning. Story put the loss behind him and immediately began putting together one of most impressive win streaks in the UFC. Story started out by defeating Brian Foster via submission before racking up wins over Jesse Lennox and Nick Osipczak via hard-fought decisions. Story moved on to face BJJ ace Dustin Hazelett and began to open eyes when he finished Hazelett via 2nd round TKO. Story was then paired with undefeated Johny Hendricks, pulling off the mild upset by using his defensive wrestling and clinch work to keep Hendricks off-track. Story went on to earn his most high-profile victory to date, winning a decision over dangerous striker Thiago Alves that elevated him towards title contender status. Story looked to maximize his momentum by stepping in on just a few weeks notice to face Nate Marquardt, but Marquardt was pulled from the bout following a medical issue. Story could have chosen not to compete on the card, but decided to face late-replacement Charlie Brenneman. Story was unable to stuff Brenneman’s takedowns and lost via unanimous decision immediately ending his meteoric rise up the ranks. Story looked to rebound against Danish striker Martin Kampmann, but once again lost via decision.

2011 Breakdown:
Story fought 3 times in 2011, going 1-2 overall.
Story, on the strength of a 5-fight win streak was booked against former title contender Thiago Alves at UFC 130. Story began the fight by pressuring Alves and not letting him get into a rhythm landing strikes. Story constantly had Alves backpedaling and looked to have Alves down two rounds to none. Alves finally started connecting on some strikes in the final frame, but it was simply too little, too late as Story took home a unanimous decision victory.
Story was willing to jump right back in the mix 2 months later, accepting a headlining bout with former middleweight Nate Marquardt at UFC Live 4. In a turn of events, Marquardt was pulled from the card and Story was presented with the option of facing non-contender Charlie Brenneman or not fighting at all. Story accepted the fight, though it would later be determined to be a grave misstep as Brenneman came right out after Story and imposed his will on him. Brenneman used his wrestling to put Story on his back and basically hold him there, accumulating rounds in the process. Story came out with a vengeance in the 3rd round looking for the finish, but Brenneman once again took the fight to the ground and survived some dangerous submission attempts to hold on for the stunning unanimous decision upset.
Story looked to bounce back against fellow fringe contender Martin Kampmann at UFC 139. Story started out the fight strong, rocking Kampmann early in the 1st. Story slowed down in the latter round as Kampmann scored with takedowns while winning most of the grappling exchanges. Kampmann ended up winning via unanimous decision.

2012 Forecast:
Story had a whirlwind 2011 like few others have experienced in the UFC. Story went from winning his fight over Alves and possibly being one fight away from a title shot to losing to a virtual unknown and tumbling down the rankings. Story has always lacked elite finishing skills as most of his finishes have been attributed to his raw physical strength rather than his actual technical skills. Story basically has to fight a perfect fight each time out to beat high-level contenders. Though he was doing that, evidenced by wins over Hendricks and Alves, the wheels finally came off when he could not be the bully. Story is still young and just entering his prime. He would be wise to commit himself towards working on his striking and overall fluidity in the cage. His punches have power, but he usually put his head down when he swings causing him to be off-target. Story has the skills to work himself back into title contention, but he is bound to run into the same problems if he cannot learn to pace himself and develop finishing skills.