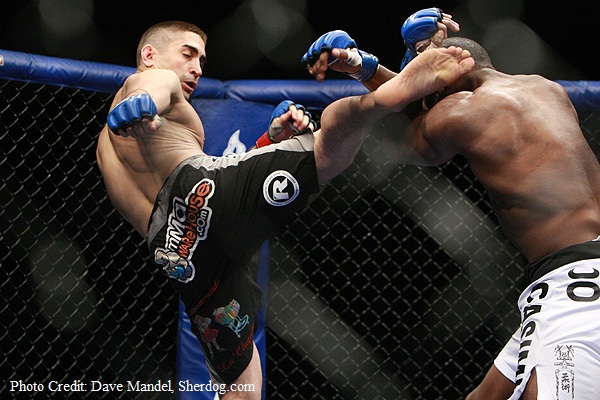 Background:
Ricardo Lamas made his mixed martial arts debut in 2008 following an amateur wrestling career at Elmhurt University. Lamas put together a 5-0 record on the independent circuit before making his WEC debut as a lightweight against veteran striker Bart Palaszewski on just a few days notice. Lamas pulled off the upset, using his wrestling to control Palaszewski and score the unanimous decision. Lamas would suffer his first career loss in his next fight to Danny Castillo. Lamas bounced back, winning his next three fights over James Krause, Bendy Casimir, and Dave Jansen before losing via knockout to Brazilian prospect Yuri Alcantara on the WEC’s final fight card. Lamas dropped down to the featherweight division as he entered the UFC and has won consecutive fights over Matt Grice and Cub Swanson.

2011 Breakdown:
Lamas went 2-0 in 2011, capping off a successful year that has him quickly climbing the ranks of the UFC featherweight division.
Ricardo Lamas defeated Matt Grice at UFC Live 4 via TKO in the 1st round. It was a fairly one-sided fight and Lamas showed that he was ready to start facing high-level competition again.
Lamas next squared off against veteran Cub Swanson at UFC on Fox 1. In a back-and-forth fight, that Swanson was narrowly winning, Lamas was able to take Swanson’s back and submit him with an arm triangle earning the come-from-behind victory.

2012 Forecast:
Lamas has beaten tough competition throughout his young career, but he initially seeeds to lack the overall skills to be an elite contender. He is solid in all areas, but for some reason he has been unable to get over the hump as far as being a top 10 contender. As of late, Lamas has improved his finishing skills and this could be a sign that he is ready and able to have a breakout year. Lamas has solid wrestling and if he can bring the rest of his game up to par, he could be a legitimate title contender.