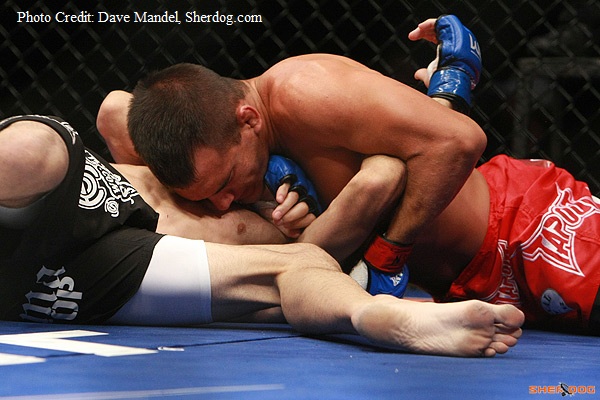 Background:
Rani Yahya is easily considered to be one of the top Brazilian jiu-jitsu practitioners in mixed martial arts. Yahya won the Abu Dhabi Combat Club (ADCC) submission championship at 145 lbs. in 2007. Yahya began his MMA career in 2002, going 5-1 on the Brazilian independent circuit before primarily competing across Japan. Yahya continued to find success due to his BJJ prowess, putting together an 11-2 overall record with his only losses coming to established veterans J.Z. Cavalacante and Fredson Paixao. Yahya debuted in the WEC in 2007 facing dangerous striker Mark Hominick. Yahya scored a 1st round submission victory and was immediately thrust into a title shot opposite WEC bantamweight champion Chase Beebe. Beebe was able to control Yahya for most of the 5-round fight, retaining his belt. Yahya returned to Japan where he was finished via strikes by Kid Yamamoto. Yahya ended his tenure in Japan, returning to the WEC where he rattled off 3-straight, 1st round submission victories over Yoshihiro Maeda, Eddie Wineland, and John Hosman. Yahya found himself back in title contention, but Joseph Benavidez soon put an end to that, finishing Yahya via TKO in the 1st round. Yahya would lose his next fight via decision to Takeya Mizugaki, ultimately prompting a move up to the featherweight division in 2011. Yahya scored a huge win in his featherweight and UFC debut over former WEC featherweight champion Mike Brown. Yahya could not capitalize on the momentum losing to Chad Mendes in his next fight.

2011 Breakdown:
Yahya went 1-1 in 2011 as he competed as a featherweight.
Yahya was expected to face Chan Sung Jung in his UFC debut at UFC Fight Night 23, but Jung was forced off the card with an injury. Yahya would remain on the card as former WEC featherweight champion Mike Brown accepted the bout on short notice. Yahya was able to avoid Brown’s big right hand while doing what he does best, grapple. Yahya was able to control the final round, scoring a huge win in his featherweight and UFC debut.
Yahya was rewarded with an opportunity to face Chad Mendes at UFC 133 in a possible #1 contender fight. Mendes used his improved striking to avoid the ground game with Yahya, ultimately winning a fairly one-sided unanimous decision.

2012 Forecast:
Yahya’s submission skills are no secret to his opponents. Yahya pretty much wins by submission or is beaten by sopponent with solid takedown defense and effective striking. Yahya’s future career will be determined by the match-ups he is faced with. He is likely unable to revamp his striking game at this stage of his career, so Yahya will have to rely heavily on what got him to the big show. He is an undersized featherweight, though that did not hinder him in his fight with Brown.