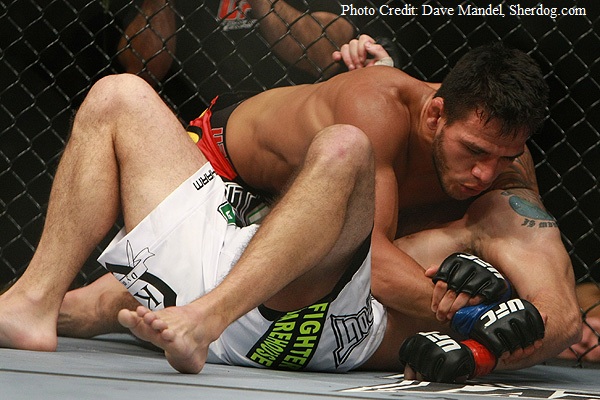 Background:
Rafael Dos Anjos made his mixed martial arts debut in 2004, struggling out of the gates to a 2-2 overall record. Dos Anjos’ career soon caught fire as he won his next 9 fights, primarily in his native Brazil. Dos Anjos signed with the UFC in 2008 and made his debut against Jeremy Stephens at UFC 91 where he suffered a brutal knockout loss. Dos Anjos eventually returned to face Tyson Griffin and despite a spirited effort, once again came up short losing via unanimous decision. Dos Anjos was at risk of being released by the UFC, but soon found his stride winning hist next three fights over Rob Emerson, Kyle Bradley, and an upset victory over Terry Etim. Dos Anjos was rewarded with a marquee fight against Clay Guida following his win over Etim. Dos Anjos was arguably on his way to winning the fight, but in the 3rd round Dos Anjos was unable to continue due to breaking his jaw earlier in the fight. Dos Anjos would be sidelined for nearly a full year as he traveled overseas to Thailand to work on his striking. Dos Anjos returned to face George Sotiropoulos in 2011, and pulled off the upset, knocking Sotiropoulos out in the very 1st round. Dos Anjos could not capitalize on the momentum though, losing his next fight to fellow Brazilian Gleison Tibau via decision.

2011 Breakdown:
Dos Anjos went 1-1 in 2011 following a nearly 1-year layoff.
Dos Anjos stepped in for an injured Evan Dunham to face George Sotiropoulos at UFC 132. Dos Anjos flashed some improved striking to shockingly knock out Sotiropoulos in the very 1st round.
Dos Anjos moved on to face fellow Brazilian Gleison Tibau at UFC 139. The fight was close early, but Tibau landed some big punches in the 2nd round and did just enough with his takedowns to win the split decision.

2012 Forecast:
Dos Anjos has shown remarkable growth as a fighter over the last couple of years. Following his 2010 loss to Guida, Dos Anjos worked heavily on his striking, which paid immediate dividends in his fight with Sotiropoulos. Dos Anjos’ chin is still a cause for concern, so it questionable as to whether he should adapt such a striking-focused attack. Dos Anjos has shown that he belongs in the UFC with his recent octagon performances, but he will have to string together some victories to truly bring himself to the next level of the division. He is a bit undersized compared to the elites of the division, so a move to featherweight could be a possibility in the future.