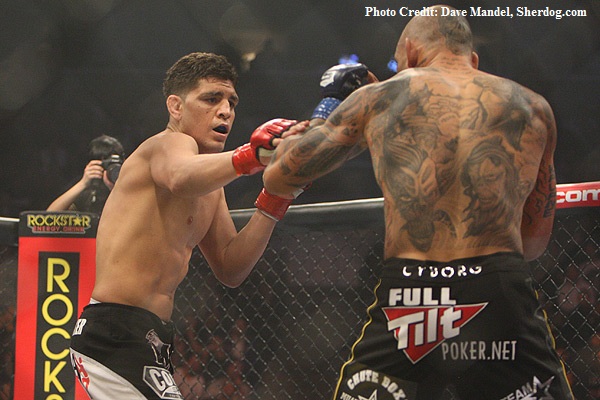 Background:
Nick Diaz is one of the most exciting, controversial fighters in the world today. Diaz’s chin has withstood the power of Robbie Lawler and Takanori Gomi, making him nearly impossible to finish. Diaz made his official mixed martial arts debut in 2001, a few days after he turned 18 years old. Diaz won his first 4 fights, including a decision win over UFC veteran Chris Lytle. Diaz lost his next 2 out of 3 fights, before avenging one of the losses and eventually signing with the UFC in 2003. Diaz defeated Jeremy Jackson in his debut before facing off with hard-hitter Robbie Lawler. Lawler was thought to be on his way to future title contention and was the heavy favorite coming into the fight. Diaz surprisingly dared to stand and trade with the brawler, eventually knocking Lawler out with a perfectly placed right hand. Diaz went on to take part in some legendary wars with Karo Parisyan, Diego Sanchez, and Joe Riggs, but was unfortunately coming up short on the judges’ scorecards. Diaz struggled to a 2-4 record in his next 6 fights and was released by the UFC. He briefly returned to the independent circuit where he picked up a much-needed win before returning to the UFC, winning his next two fights over Josh Neer and Gleison Tibau. Diaz decided to not re-sign with the UFC, instead signing with PRIDE where he faced off with PRIDE lightweight champion Takanori Gomi. In a thrilling back-and-forth fight where Diaz was badly rocked, he battled back to lock on a rare gogoplata submission to earn the come-from-behind victory. The win would later be overturned though after Diaz tested positive for marijuana. Diaz moved on to sign with EliteXC, where he went 3-1 against largely overmatched competition. Diaz’s one loss to K.J. Noons was due to a doctor stoppage, which nearly resulted in a post-fight brawl between the two corners. Diaz eventually signed with Strikeforce where he truly came into his own as a fighter. Diaz once again faced fairly one-dimensional strikers, but nonetheless racked up victories over Frank Shamrock, Scott Smith, Marius Zaromskis, K.J. Noons, Cyborg Santos, and Paul Daley. Diaz won the Strikeforce welterweight title in 2010 and successfully defended the belt three times before vacating the title in order to re-sign with the UFC in 2011. Though Diaz was initially scheduled to challenge reigning UFC welterweight champion Georges St.Pierre in his debut, he ended up facing off against former champion B.J. Penn. In Diaz’s first fight in the octagon in nearly 5 years, he battered Penn for the latter two rounds to win a decision, once again securing a future UFC title shot.

2011 Breakdown:
Nick Diaz fought 3 times in 2011, twice for Strikeforce and more recently in the UFC, going 3-0 overall.
Diaz successfully defended his Strikeforce welterweight championship against strikers Evangelista Santos and Paul Daley.
In the Cyborg fight, Diaz allowed Cyborg to land his best shots likely hoping to let the Brazilian slugger punch himself out. Cyborg landed some huge unanswered leg kicks as well, but eventually Diaz began chipping away at Cyborg with his straight punches. In the 2nd round, with Cyborg tiring, but still landing shots, Diaz took the fight to the ground and tapped him out with an armbar.
Diaz’s next title defense came against Paul Daley in what may have earned round of the year as both men landed huge punches that would have likely ended most other fighters’ nights. Daley seemed to have Diaz hurt, but Diaz stormed back to drop Daley where he pounced with ground ‘n’ pound until the ref stopped the fight.
With Strikeforce seemingly out of legitimate welterweight title contenders, the UFC signed Diaz to their roster. The UFC immediately rewarded Diaz with a title shot against Georges St.Pierre at UFC 137. Diaz missed some press events and was shortly pulled from the title fight in favor of Carlos Condit.
Diaz ended up facing off against former UFC champion B.J. Penn at UFC 137. The fight started off fairly even, but Diaz’s nonstop attack finally put Penn’s questionable conditioning to the test. Diaz began connecting on countless punches in the 2nd and 3rd rounds that had Penn battered like never before. Penn hung tough and landed a few of his own shots, but it was Diaz who was pushing the pace and causing damage. Diaz picked up a unanimous decision win and was once again deemed the #1 contender to GSP’s championship belt.

2012 Forecast:
Diaz has turned into a star, whether he likes the attention or not. His move from Strikeforce to the UFC will raise the pressure considerably, and though he always shows up to fight, one has to wonder how he will continue to handle all of the media and promotion involved with being a high-profile fighter in the UFC. Diaz’s weakness in his earlier UFC run was his takedown defense and ability to get up off of his back. Those questions still exist as Diaz has mainly faced strikers since his exit from the UFC in 2006. Diaz looks to be physically stronger since then, but the fact that he does not employ a varied striking attack with kicks and knees may put him at risk when he faces top-level wrestlers that are constantly trying to shoot in for the takedown. It is anyone’s guess if GSP would have dominated his fight with Diaz by using his wrestling. Diaz is now facing Carlos Condit in 2012 and will likely not have to worry about the takedown. Diaz has the boxing to beat any fighter standing at 170 or possibly even at 185. He has an iron chin and his conditioning is unparalleled due to his side passion of participating in triathlons. Diaz is set to face Carlos Condit for the interim UFC welterweight championship in 2012.