Notice: Function WP_Scripts::localize was called incorrectly. The $l10n parameter must be an array. To pass arbitrary data to scripts, use the wp_add_inline_script() function instead. Please see Debugging in WordPress for more information. (This message was added in version 5.7.0.) in /var/www/wp-includes/functions.php on line 5835
 Nate Diaz - Ranking MMA 
Notice: A non well formed numeric value encountered in /var/www/wp-content/themes/mma-sport-magazine/inc/live-style.php on line 40 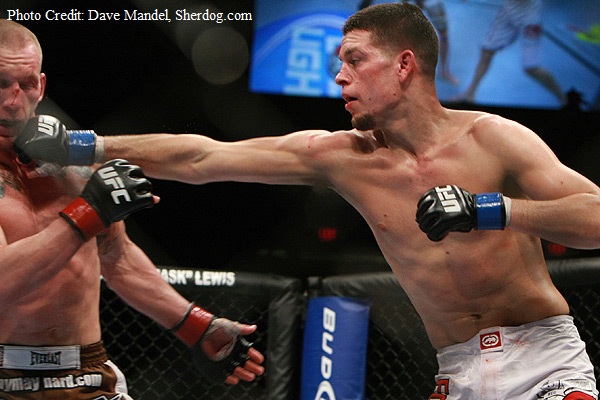 Background:
Nate Diaz, winner of The Ultimater Fighter 5 and younger brother of welterweight title contender Nick Diaz, has bounced between 155 and 170 lbs, though he has yet to fight for a title. Nate Diaz made his mixed marital arts debut in 2004, racking up a 5-2 record on the independent circuit, his only two losses coming to veteran competition. Diaz tried out for The Ultimate Fighter 5 in 2007, submitting his way to the finals by defeating Rob Emerson, Corey Hill, and Gray Maynard. Diaz defeated Manny Gamburyan in the TUF 5 Finale after Gamburyan re-aggravated a past shoulder injury. Diaz won his next 4 fights, 3 of which came via submission, including a highlight-reel triangle of black belt Kurt Pellegrino. Diaz’s momentum would stall as he lost his next two UFC fights to Clay Guida and Joe Stevenson, both of whom revealed a hole in Diaz’s takedown defense. Diaz bounced back with a win over Melvin Guillard before losing a close decision to Gray Maynard, prompting him to leave the lightweight division. Diaz made his welterweight debut against Rory Markham, winning via TKO. Diaz moved on to submit veteran Marcus Davis before losing a razor-thin decision to Dong Hyun Kim. Diaz fought once more at welterweight as he was rag-dolled by Canadian prospect Rory MacDonald on way to losing a decision. Diaz returned to the lightweight division, successfully defeating Takanori Gomi and Donald Cerrone to merit consideration as a potential title contender. Diaz has won Fight of the Night 5 times, while also collecting 3 Submission of the Night honors.

2011 Breakdown:
Diaz went 2-2 in 2011, both losses coming at welterweight.
Diaz fought Dong Hyun Kim at UFC 125, and in a close fight throughout, Diaz was unable to win the decision. Kim used his strength advantage to take Diaz down and attempt to grind out rounds. Though Diaz stormed back in the final frame, it was too, little too late. I had scored the fight a draw.
Diaz moved on to face Rory MacDonald at UFC 129 in a battle of top prospects. It was evident that MacDonald would hold the strength advantage once the fight got started. It was close early with both fighters not giving an inch, but MacDonald dominated the final round to win a unanimous decision victory.
Diaz returned to the lightweight division following back-to-back losses where he would face struggling former PRIDE champion Takanori Gomi. Diaz made quick work of Gomi, stunning him with strikes before locking on an armbar for a 1st round submission victory.
Diaz moved on to lightweight contender Donald Cerrone, who was riding a 4-fight UFC win streak, 6 overall counting his WEC tenure. Diaz controlled the striking game throughout the fight, peppering Cerrone with countless punches to earn a unanimous decision.

2012 Forecast:
Diaz is still just 26 years old despite having a ton of experience underneath his belt. Diaz’s takedown defense is still a weak spot considering the high-level wrestlers manning the top spots of the UFC lightweight division. Diaz has to show that he can stay off his back and not get frustrated, which led to some of his previous losses. Diaz has shown an excellent guard, but is best when he can keep the fight standing and use his reach to outbox his opponents.