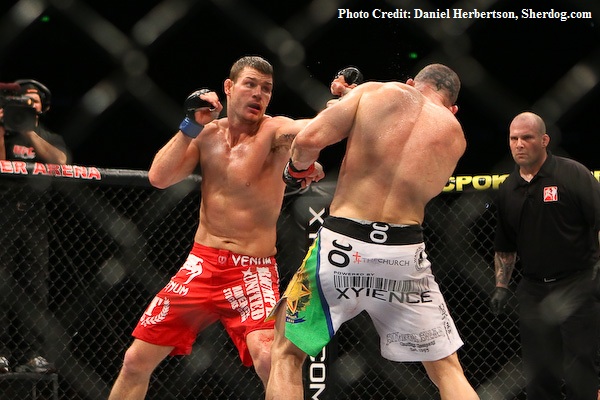 Background:
Michael Bisping is one of the top MMA fighters to ever come of England and is currently a title contender in the UFC middleweight division. Bisping is also known for his polarizing personality and winning season 3 of The Ultimate Fighter. Bisping began his mixed martial arts career in 2004, immediately finding success on the local independent circuit. Bisping scored finishes over every opponent he faced, as he built an impressive 10-0 overall record. Bisping was chosen to participate on season 3 of The Ultimate Fighter. Bisping defeated journeymen Kristian Rothaermel and Ross Pointon to earn a spot in the finals opposite Josh Haynes. Bisping dominated Haynes to become the TUF 3 winner. Bisping won his next 2 bouts via TKO over veterans Eric Schafer and Elvis Sinosic before facing off against TUF 3 rival Matt Hamill at UFC 75. Bisping and Hamill went back-and-forth for 3 rounds with Hamill seemingly landing the more powerful strikes throughout the fight. In a controversial decision, Bisping was awarded the split decision victory. Bisping fought once more at light heavyweight as he squared off against future UFC champion and TUF 2 winner Rashad Evans. The fight was close throughout, but in the end Evans did just enough to earn the win. Following his first official career loss, Bisping dropped down to 185 lbs. Bisping finishes his first 2 opponents in his new weight class before headlining UFC 89 opposite Chris Leben. Bisping controlled the fight with his technical boxing on way to winning a unanimous decision. Bisping was moving up the ranks quickly and was likely next to receive a title shot if he could get past Dan Henderson at UFC 100. Bisping and Henderson coached season 9 of TUF and had developed an intriguing rivalry coming into their much-anticipated fight. Bisping’s title hopes were quickly squashed as he was brutally knocked out by Henderson in the 2nd round. Bisping bounced back with a win over veteran Denis Kang before losing a close unanimous decision to Wanderlei Silva. Bisping would not lose again as he has racked up 4 straight wins over veterans Dan Miller, Yoshihiro Akiyama, Jorge Rivera, and Jason Miller that have him on the doorstep of a possible title shot heading into 2012.

2011 Breakdown:
Bisping fought twice in 2011, winning both fights via TKO.
Bisping accepted a bout with veteran striker Jorge Rivera at UFC 127 after Rivera had called him out. Following a furious exchange of pre-fight remarks that seemed to genuinely anger Bisping, the fight went down in Bisping’s native England. Rivera began the round as the aggressor, continually keeping Bisping on his heels. Bisping scored a takedown, but as Rivera got back to his feet, Bisping leveled him with a clearly illegal knee. Bisping was deducted a point and Rivera was barely able to continue following a brief recovery period. Rivera snuck through some solid punches as Bisping looked for takedowns. Bisping controlled most of 1st round with his wrestling. In round 2, Rivera landed a solid right hand that looked to have Bisping rocked. Bisping stormed back and began punishing Rivera with unanswered punches against the cage for the eventual TKO victory.
Bisping moved on to coach season 14 of The Ultimate Fighter opposite Jason “Mayhem” Miller. The two rival coaches eventually squared off at the TUF 14 Finale. Mayhem Miller found early success by pushing the pace and scoring a takedown. Bisping patiently got back to his feet and began to establish his jab. In round 2, Bisping took control of the fight battering Miller with unanswered punches. Miller hung in there, but he was running on fumes. Bisping eventually finished Miller in the 3rd round with some brutal ground ‘n’ pound, sealing the one-sided TKO victory.

2012 Forecast:
Bisping had a strange 2011 facing non-contenders in main event fights. It seems as if Bisping’s status as a title contender has taken a backseat to assuring he remains a top draw by matching him up with overmatched competition. Bisping is at his best when he is the aggressor, pushing the pace and combining his technical boxing with the ability to out-wrestle his opposition. He gets in trouble when he allows his opponent to pressure him. Bisping’s 3 career losses have come to marquee fighters, 2 of which were fairly close decisions. Bisping should be allowed the opportunity to fight top contenders that can earn him the right to fight for the title. Bisping is not getting any younger and he has sort of capped out as far as his overall skill-level. The UFC would likely love to match him up against Anderson Silva, but they will need to take the risk of him losing to top contenders Sonnen, Okami, or Belfort in order to earn it.