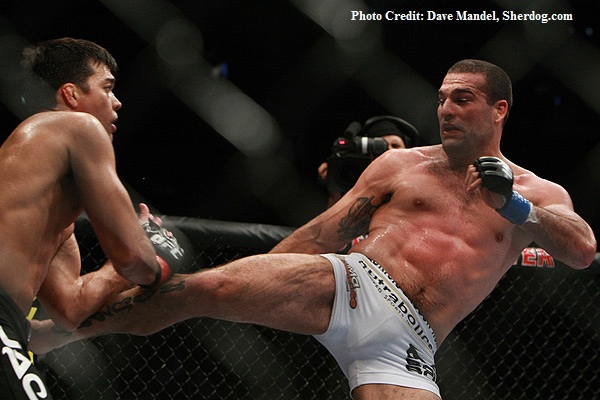 Background:
Mauricio “Shogun” Rua is the former UFC light heavyweight champion following a successful career in the PRIDE organization. Rua trained alongside his brother Murilo at the famed Chute Boxe Academy before making his mixed martial arts debut in 2002. Shogun quickly won his first 3 fights on the Brazilian independent circuit, highlighted by a victory over Evangelista Santos. Shogun moved on to compete in an 8-man, one-night tournament where he suffered his first career loss to Renato “Babalu” Sobral. Shogun eventually signed withd the PRIDE organization in 2003 where he quickly established himself as one of the top fighters in the world. Shogun finished his first 4 opponents under the PRIDE banner, brutally knocking out notable veterans Akira Shoji and Akihiro Gono. Rua went on to participate in the PRIDE 2005 middleweight (205 lbs.) Grand Prix, decimating Quinton “Rampage’ Jackson via strikes in the first round of the tournament. Rua moved on to face Antonio Rogerio Nogueira in the next round as both fighters fought their hearts out in a fight that was called Fight of the Year. Rua would earn the close decision over Nogueira, advancing to the semi-finals where he finished Alistair Overeem before knocking out Ricardo Arona in the finals to win the Grand Prix tournament. Rua was widely considered to be the top 205 lbs. fighter in PRIDE outside of teammate and reining PRIDE middleweight (205 lbs.) champion Wanderlei Silva. In Rua’s next fight he suffered a freak arm injury against Mark Coleman and was unable to continue, thus awarding Coleman the controversial TKO victory. A memorable brawl ensued following the fight between Coleman and Shogun’s cornermen. Rua eventually returned from injury to win his final 4 fights in PRIDE, defeating Cyrille Diabate, Kevin Randleman, Kazuhiro Nakamura, and Alistair Overeem. Following PRIDE’s demise, Shogun signed with the UFC and made his much-anticipated UFC debut against TUF 1 winner Forrest Griffin. Despite being a huge favorite, Rua was unable to match Griffin’s conditioning and size, stunningly lose via 3rd round round submission. Rua would be sidelined for all of 2008 as he recovered from knee surgery. Rua finally made his return in 2009 in a rematch with Mark Coleman at UFC 93. The fight was much closer than most experts expected, but Rua eventually wore Coleman down and finished him with strikes in the 3rd round, though it was obvious that Rua was not fully recovered from his previous injuries. Rua moved on to face fading former UFC light heavyweight champion Chuck Liddell at UFC 97. Rua was able to score the 1st round knockout victory, propelling him towards a title shot against reining champion Lyoto Machida. Rua and Machida faced off at UFC 104 and in a controversial 5-round decision, which most felt Rua had clearly won, the judges awarded Machida the unanimous decision victory. Following the fight, Dana White announced an immediate rematch for the dejected Rua. The rematch went down at UFC 113 as Rua once again proved himself to be the superior fighter, finishing Machida with strikes in the 1st round to win the UFC light heavyweight championship. Unfortunately, Rua would be forced to undergo further knee surgery and was sidelined for nearly a year before finally making his return at UFC 128 against rising contender Jon Jones. Rua was a shell of his former self, losing via 3rd round TKO. Rua rebounded, to avenge his previous loss to Forrest Griffin at UFC 134, easily defeating the former UFC light heavyweight champion via 1st round knockout. Rua moved on to face Dan Henderson at UFC 139 in a scheduled 5-round fight. Rua and Henderson put on a back-and-forth war that easily won Fight of the Night and Fight of the Year honors, though Rua lost the fight via close decision.

2011 Breakdown:
Rua fought 3 times in 2011, going 1-2 overall as he unsuccessfully attempted to defend his UFC light heavyweight title.
Rua was initially scheduled to defend his UFC light heavyweight championship against Rashad Evans in 2011, but due to an injury to Evans, his training partner Jon Jones agreed to step in on short notice as the new top contender. Rua struggled early as Jones took him down and scored with big elbows. Rua eventually got back to his feet, but Jones allowed him little time to recover as he continued to pour on the pressure. The 1st round clearly went to Jones as Rua struggled back to his corner. Jones continued to batter Rua with strikes from all angles. Shogun showed a ton of heart hanging in there, but he simply had nothing to offer in return. Shogun tried pressing forward, but Jones was simply too fast and strong for Rua. In the 3rd, Jones finally finished the job, scoring with huge strikes that dropped Rua to the floor for the TKO finish.
Rua returned to his native Brazil where he faced former foe, Forrest Griffin, at UFC 134. Griffin had previously defeated Rua back in 2007, but this time Griffin had no such success as Rua came out aggressively trying to push the pace with strikes. Griffin tried to stand his ground, but was soon hurt by Rua’s flurries and dropped to the floor where Rua finished the job with unanswered punches.
Rua moved on to face recently re-signed legend Dan Henderson at UFC 139.
Henderson started the fight out strong, connecting on some solid punches that had Rua in early trouble. The rounds were fairly close, but Henderson was definitely landing the harder shots. In the 3rd round, Rua was rocked by a huge right hand that nearly forced the referee to stop the fight. Rua was badly bleeding from his left eye, but continued to push forward. The tide began to turn in the 4th round as Rua continued to press forward while Henderson began to slow down. They traded lazy punches before Rua easily mounted Henderson on the ground. In the final frame, Rua dominated nearly the entirety of the round as he once again took Henderson down and mounted him. Rua unloaded with punches, but was unable to finish Henderson, forcing the judges to decide the fight’s outcome. Henderson narrowly earned the unanimous decision.

2012 Forecast:
Shogun continues to struggle with knee injuries that have robbed him of his explosiveness and ability to fight in peak fighting condition. Nonetheless, Rua continues to be one of the elite fighters in the light heavyweight division. When Rua comes into a fight in shape and injury-free he is a threat to anyone. Unfortunately, it seems that Rua’s prime years may rapidly begin fading away due to his continuing knee issues. Rua is as tough as they come, evidenced by his 5-round war with Henderson, but he will need to truly take a look at his career should he lose his next fight. Rua is a solid 205-pounder, but he would be wise to at least consider a move down to middleweight should Anderson Silva retire. The move down in weight could possibly breathe new life into Rua’s career, giving him another opportunity to contend for the title, while easing the strain and weight placed on his surgically-repaired knees.