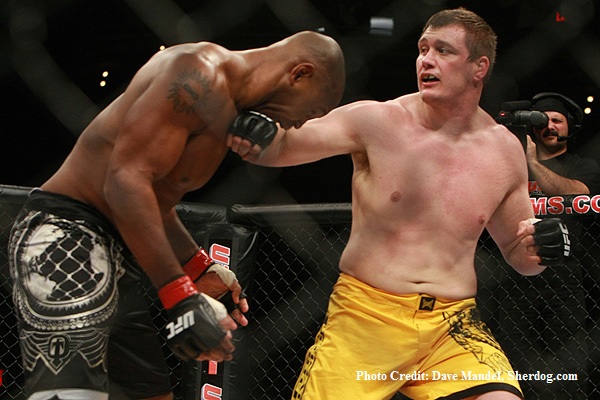 Background:
Matt Mitrione was a cast member of season 10 of The Ultimate Fighter before establishing himself as one of the top prospects in the UFC heavyweight division. Mitrione played college football at Purdue University before briefly competing in the NFL as a defensive tackle. Mitrione had no MMA professional experience despite being chosen to compete on season 10 of The Ultimate Fighter. Mitrione showed off his prospective talent by defeating UFC veteran Scott Junk in the first round of the competition. Mitrione struggled with injuries following the win, but moved on anyways to face off against James McSweeney. McSweeney controlled most of the fight, eventually submitting Mitrione via guillotine. Mitrione eventually made his official UFC debut at the TUF 10 Finale where he faced off against fellow NFL alum Marcus Jones. Mitrione showed off his striking and takedown defense as he eventually knocked Jones out in the opening seconds of the 2nd round. Mitrione picked up his most notable win next time out by finishing fellow TUF 10 alum Kimbo Slice. Mitrione used his heavy leg kicks to continually keep Slice on the defense, eventually finishing him via 2nd round TKO. Mitrione’s impressive growth as a fighter was on display as he racked up wins over Joey Beltran, Tim Hague, and Christian Morecraft. Mitrione took a big step up in competition as he faced off against Cheick Kongo at UFC 137. Mitrione failed to rise to the occasion as he struggled to let his hands go throughout the fight. Mitrione ended up losing via unanimous decision.

2011 Breakdown:
Mitrione stayed active in 2011, fighting 3 times, going 2-1 overall.
Mitrione faced off against Canadian Tim Hague at UFC Fight Night 23. Mitrione looks light on his feet in the bout’s opening moments. Hague shot in for a takedown, but Mitrione stuffed it and answered back with a knee to the body. Mitrione landed a big left hand that sent Hague to the floor, but Mitrione allowed him to stand back up. Mitrione started to score with strikes, eventually dropping Hague again with a big left hand. Mitrione went in for the finish and a few punches later, the referee was forced to step in and stop the fight.
Mitrione moved on to face Christian Morecraft at UFC on Versus 4. Mitrione seemed to be the quicker fighter as he fired off strikes, weaving in and out.
Mitrione connected on a solid left hand that dropped Morecraft. Mitrione allowed Morecraft to stand back up where he continued to punish him with leg kicks and left hands. Morecraft looked to be finished, but he was able to hold onto Mitrione and survive the round. In round 2, they started out a bit tentatively until Morecraft shot in for the takedown, momentarily bringing Mitrione down. Mitrione worked his way back to his feet only to be taken right back down, but Morecraft was unable to land any offense and the referee stood them back up. Mitrione immediately started landing strikes and had Morecraft badly hurt from punches. Mitrione continued to fire away, eventually dropping Morecraft with a combination.
Following a 5-fight win streak in the UFC, Mitrione took a significant step up in competition as he faced off against Cheick Kongo at UFC 137. The 1st round saw both strikers hesitant to let their hands go. Mitrione pushed forward throughout the round, but looked tentative. Kongo connected on a couple of leg kicks, but otherwise seemed cautious as well. In the 2nd round, both fighters stepped up their activity as Kongo scored with leg kicks while Mitrione landed a few punches. Mitrione pushed forward and connected on a couple of punches that seemed to have Kongo in trouble, but Mitrione let him off the hook. Entering the 3rd round, neither man looked overly impressive or determined to finish the fight. Kongo landed a couple of punches early before scoring a big takedown. Mitrione was able to get back to his feet, but Kongo once again took him down and finished the fight landing some ground ‘n’ pound. Kongo easily took the 3rd round to win via unanimous decision.

2012 Forecast:
Matt Mitrione has made waves in the UFC heavyweight division since ending his participation on The Ultimate Fighter 10. Although Mitrione dropped a tough decision to Cheick Kongo, he by no means was blown out of the water. Considering that Kongo is a decent gatekeeper, Mitrione should be pleased with his rapid ascension up the UFC ranks. If Mitrione can continue to develop his overall skill level, his physical gifts should be able to propel him towards future contender status. It should be mentioned that Mitrione has been booked carefully thus far in his UFC career. He has not faced any top-level wrestlers or submission artists, whom would likely expose his lack of ground skills. Mitrione’s transition into mixed martial arts from pro football has been remarkable and at times overlooked. Remember, Mitrione made his mixed martial arts debut in the UFC. Not many fighters could have achieved what Mitrione has done thus far in his young career.