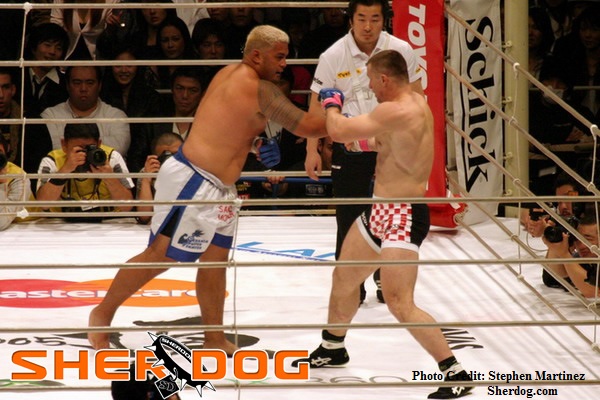 Background:
Mark Hunt was a former PRIDE and K-1 star before making his way to the UFC in 2010. Following a successful career in K-1, Hunt made his mixed martial arts debut in 2004 for the PRIDE promotion. Hunt lost his first bout via submission to Judo star Hidehiko Yoshida. Hunt rebounded by finishing Dan Bobish before facing off with PRIDE legends Wanderlei Silva and Mirko Cro Cop. Hunt would show off his legendary chin and punching power, winning both fights via split decision. Hunt would win two more fights before eventually losing to Josh Barnett in the PRIDE 2006 Openweight Grand Prix via 1st round submission. Hunt moved on to face Fedor Emelianenko for the PRIDE heavyweight championship and despite holding his own early was submitted once again via kumura in the 1st round. Following PRIDE’s demise, Hunt stayed on the sidelines for over 18 months before finally returning in the Dream promotion in 2008. Hunt would lose his next 3 fights, all via 1st round finish to Alistair Overeem, Melvin Manhoef, and Gegard Mousasi. Despite a 5-fight losing streak, Hunt was allowed the opportunity to fight in the UFC due to prior contractual agreement in his PRIDE contract. Hunt debuted at UFC 119 against Sean McCorkle, but was quickly tapped out in the opening seconds of the fight. Hunt’s career looked to be on its last legs as he came into his UFC 127 fight opposite Chris Tuchscherer. Hunt looked to be in better shape as he stuffed Tuchscherer’s takedowns and battered him with punches. Hunt would achieve a walk-away knockout victory in the 2nd round, his first win in nearly 5 years. Hunt continued his improbable comeback by defeating IFL veteran Ben Rothwell via decision, showing off improved grappling skills.

2011 Breakdown:
Hunt fought twice in 2011, stunningly winning both bouts in his quick rise back to prominence.
Hunt was likely fighting for his UFC job as he faced off against Chris Tuchscherer at UFC 127. Hunt immediately came forward to start the fight, looking to land strikes. Hunt connected on a couple of solid right hands that had Tuchscherer shooting for the takedown. Hunt stuffed the attempts and fired off punches. Tuchscherer gamely stood in the pocket, but he was quickly getting tagged with punches. Tuchscherer was able to land a takedown in the final moments of the round and tried to lock on a kimura, but Hunt was able to fight off the attempt as the round came to a close. Tuchscherer’s left eye looked badly damaged as the 2nd round started. Tuchscherer pushed forward, but Hunt backed him up with punches. Tuchscherer tried to shoot, but Hunt landed a big uppercut followed by a right hand. Tuchscherer tried once more for a takedown before Hunt finished him off for good with a combination.
Hunt moved on to face former IFL star Ben Rothwell at UFC 135. Rothwell tried to shoot for the takedown early, but Hunt was there to deny him. Rothwell tried once again, this time quickly getting full mount. Hunt got back to his feet and stuffed a few more takedown attempts before pushing forward with punches. Hunt surprisingly ended up in top position, but not for long as they returned to the their feet before Rothwell took Hunt down, this time doing some damage with ground ‘n’ pound as the round came to a close. In the 2nd round, Rothwell once again looked for the early takedown, but Hunt stuffed it and countered with some big leg kicks. Hunt scored a big uppercut before following Rothwell to the floor. Hunt moved to side control before taking Rothwell’s back and firing off some punches. Hunt rolled for an armbar in the final seconds of the round, narrowly having it locked up before the round closed. Rothwell looked to be completely gassed as the 3rd round began. Hunt tagged Rothwell with punches as Rothwell desperately tried to take the fight to the floor. Hunt landed a big right hand before taking Rothwell down. The ref stood them back up as Rothwell shot once again. Rothwell briefly took Hunt’s back and then achieved full mount, but the round and fight came to a close. Hunt won via unanimous decision.

2012 Forecast:
Mark Hunt’s rise up the UFC heavyweight ranks is astonishing. At 37 years old, Hunt has never looked better. Hunt’s overall game seems to have improved as his takedown defense and ground skills were on display against Ben Rothwell. Hunt is best known for his knockout power and ability to take a punch. As long as Hunt can avoid being put on his back, he should be able to hold his own against high-level strikers. Most naysayers feel that Hunt’s recent run is simply a flash in the pan and that his submission defense will eventually be exposed, but until that time, fans should have fun enjoying Hunt’s improbable run of success.