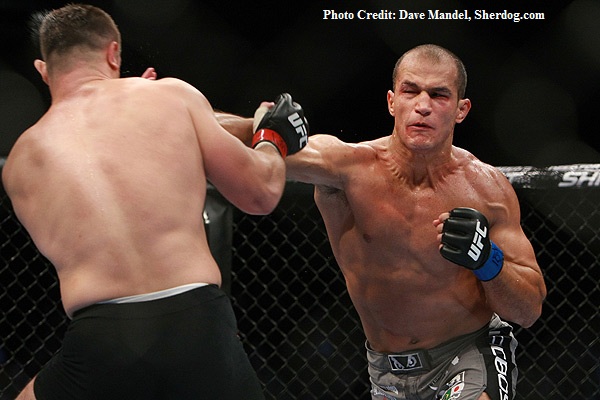 Background:
Junior Dos Santos is the current UFC heavyweight champion, having built an impressive 8-0 record in the UFC. Dos Santos began his mixed martial arts career in his native Brazil in 2006. Dos Santos quickly built a 5-0 record on the independent circuit with wins over Joaquim Ferreira and Jair Goncalves. Dos Santos was rumored to be on the verge of signing with the UFC, but Dos Santos suffered a setback in his next fight as he was submitted via armbar in a rematch with Joaquim Ferreira. Dos Santos bounced back with a 1st round TKO win over Geronimo Dos Santos before signing with the UFC in 2008. Dos Santos immediately was put to the test as he faced off against perennial contender Fabricio Werdum at UFC 90. Werdum looked to be on the verge of a UFC title shot, but was stunned by Dos Santos’ punches, losing via knockout. Dos Santos continued his rise up the ranks as he finished Stefan Struve, Mirko Cro Cop, Gilbert Yvel, and Gabriel Gonzaga. Dos Santos faced off against TUF 10 winner Roy Nelson at UFC 117, once again proving his striking skills and takedown defense by winning a unanimous decision. Dos Santos was set to face Cain Velasquez for the UFC heavyweight championship, but Velasquez was forced to undergo surgery. Dos Santos chose to stay active, agreeing to face off with Brock Lesnar following their coaching stints on The Ultimate Fighter 13. Lesnar would also be forced out due to surgery and Dos Santos was instead forced to face Shane Carwin. Dos Santos nearly had Carwin finished in the 1st round due to strikes, but Carwin hung in there as Dos Santos eventually won a one-sided decision victory. Dos Santos now had his sights set on Velasquez as the two best heavyweights in the world finally faced off at UFC on Fox 1 in the UFC’s much-hyped debut on the Fox network. The championship bout did not last long as Dos Santos’ powerful punches put Cain down early and the ref was forced to stop the fight after a few follow-up punches. Dos Santos was now the new undisputed UFC heavyweight champion.

2011 Breakdown:
Dos Santos became the UFC heavyweight champion in 2011, going 2-0 overall.
Dos Santos was the #1 heavyweight contender coming into 2011. His title date with Cain Velasquez was postponed due to Velasquez’s shoulder injury, but instead of sitting on the sidelines Dos Santos agreed to coach season 13 of The Ultimate Fighter opposite Brock Lesnar. Following the season’s conclusion, Dos Santos would face Lesnar at UFC 131 with the winner facing Velasquez. Unfortunately, Lesnar continued to struggle with issues stemming from his diverticulitis and was forced to withdraw from the bout. Lesnar was eventually replaced by Shane Carwin.
Dos Santos and Carwin headlined UFC 131. In the 1st round, both men respected each other’s power early in the fight. Dos Santos started to push forward and landed a couple of big right hands, one of which dropped Carwin to the floor. Dos Santos went in for the finish and despite landing a number of unanswered punches, Carwin was able to survive to the bell, though he looked badly hurt. In the 2nd round, Dos Santos backed off and allowed Carwin some time to recover. Midway through the round, it was Dos Santos once again who landed the biggest punches. With Dos Santos comfortably ahead going into the 3rd round, Carwin tried to push forward, but Dos Santos wisely used his movement to keep his distance and cement his status as the #1 contender in the heavyweight decision as he won a decisive unanimous decision.
Dos Santos finally got his chance to fight for the championship at UFC on Fox 1. With heavy fanfare and the UFC’s debut on Fox, the pressure was high for both heavyweights to put on a show. In the opening minute of the fight, Cain tried to score with leg kicks and a takedown, but was instead blasted with a right hand that sent him reeling to the floor. Dos Santos landed a couple more punches before the ref was forced to step in and stop the fight just over one minute into the fight. Dos Santos was now the new UFC heavyweight champion.

2012 Forecast:
Junior Dos Santos may go down as one of the greatest heavyweights to ever grace the sport. Dos Santos has pretty much cleared out the UFC’s heavyweight division outside of Alistair Overeem. Barring a huge upset, we will likely see Dos Santos successfully defending his belt for years to come. Dos Santos has amazing hand speed combined with knockout power. Dos Santos’ ground game was always considered to be a question mark, but thus far no one has been able to take him down.