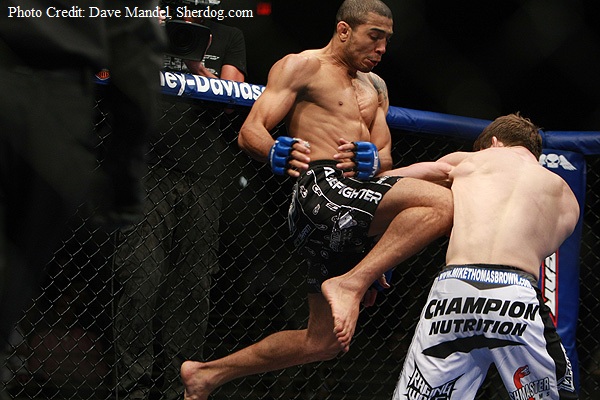 Background:
José Aldo may go down as one of the legends of mixed martial arts when it is all said and done. Aldo, currently the reigning UFC featherweight champion, trains out of Nova Uniao in Brazil. Aldo began his career in 2004, going 7-0 before losing his first and only fight to Luciano Azevedo via submission. Following the loss, Aldo defeated respected Brazilian veterans Thiago Meller and Fabio Mello before departing overseas to Japan. Aldo beat Shoji Muruyama in Pancrase before making his 2008 WEC debut against former Shooto lightweight champion Alexandre Franca Nogueira. Aldo defeated Nogueira via TKO, and quickly moved on to string together three more wins before facing off against Cub Swanson in a #1 contender fight. Aldo ended the fight in mere seconds, landing a crushing knee. Aldo’s highlight-reel knockout quickly put him on the map as an indestructible force. Aldo faced Mike Brown for the featherweight title at WEC 44, winning the championship via 2nd round TKO. Aldo successfully defended the belt two times in the WEC against Urijah Faber and Manny Gamburyan before moving on to the UFC in 2011. Aldo has continued where he left off, defeating Mark Hominick and Kenny Florian.

2011 Breakdown:
Aldo went 2-0 in 2011 successfully defending his belt against Canadian striker Mark Hominick and experienced veteran Kenny Florian.
Aldo was supposed to face Josh Grispi at UFC 125 in his first official UFC title defense, but Aldo was forced off the card due to injury.
Aldo would move on to face Mark Hominick in Hominick’s native Canada at UFC 129. Despite a hostile environment, Aldo methodically broke down Hominick with a more ground-based attack. In the 5th and final round, Aldo seemed extremely fatigued, almost allowing Hominick the opportunity to storm back and finish the fight. The fight revealed some possible weaknesses in Aldo’s conditioning and ability to fight off his back.
Aldo would make his second UFC title defense against former lightweight title contender Kenny Florian. Florian tried to take the fight to the ground early, but was consistently denied by Aldo. Aldo pulled away in the later rounds, once again using a more cautious fighting style than his earlier WEC days. Nonetheless, Aldo had once again thoroughly defeated his opposition.

2012 Forecast:
Aldo has considerably separated himself from the pack in the featherweight division. The current crop of title challengers in the featherweight division seem to pale in comparison to Aldo’s current skillset. Aldo has huge power in his strikes and seems to be immune to being hurt. His submission defense is the only viable question mark regarding Aldo’s dominance. The only threat to Aldo’s title reign, may be himself as he has struggled to make weight in the past. Aldo will face undefeated Chad Mendes at UFC 142 in 2012, which will provide Aldo the opportunity to fight in front of his fellow countrymen.