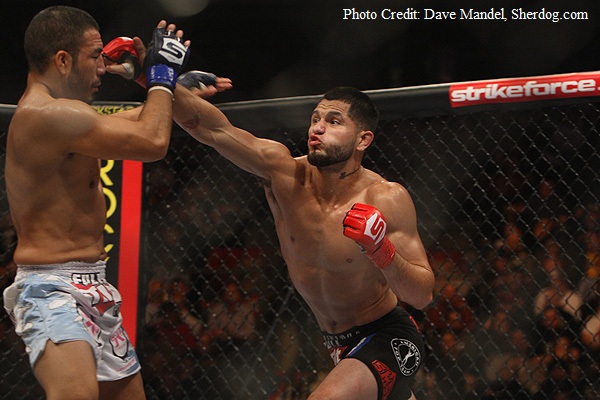 2012 Forecast:
Jorge Masvidal is one of the top strikers in the lightweight division, and at just 27 years old has faced a myriad of tough competition that should have him sufficiently prepared for a future run in the UFC. Masvidal made his MMA debut in 2003, winning his first 5 career fights. Masvidal took a step up in competition as he faced off with BJJ ace Raphael Assuncao, losing via unanimous decision. Masvidal rebounded, picking up an impressive 2nd round TKO victory over future UFC veteran Joe Lauzon. Masvidal suffered an upset submission loss to Paul Rodriguez before embarking on an 8-fight win streak. During the streak, Masvidal went 3-0 in Bodog and 2-0 in Strikeforce, defeating the likes of Keith Wisniewski, Yves Edwards, and Ryan Healy. Masvidal brought his talents to Japan’s Sengoku promotion in 2008. In his debut, Masvidal suffered an upset TKO loss to Rodrigo Damm. Masvidal bounced back by defeating IFL veteran Ryan Schultz and Seung Hwan Bang, but soon left Sengoku for the upstart Bellator promotion. Masvidal competed in Bellator’s first lightweight tournament, impressively defeating Nick Agallar via TKO in the 1st round of the tournament. Masvidal moved on to face Toby Imada in the next round, but despite dominating the early action with his striking, Masvidal was submitted in the 3rd round by a highlight-reel inverted triangle choke. Masvidal fought once more for Bellator, defeating Eric Reynolds via submission. Masvidal briefly returned to Sengoku where he brutally knocked out veteran grappler Satoru Kitaoka. Masvidal bounced around promotions, struggling to a 1-2 record, his losses coming against Luis Palomino and Paul Daley in razor-thin decisions. Masvidal eventually signed with Strikeforce in 2011. Masvidal defeated Billy Evangelista via decision before trouncing K.J. Noons in a #1 contender fight. Masvidal was rewarded with a title shot against Strikeforce lightweight champion Gilbert Melendez, and despite holding his own for a couple of rounds, Masvidal lost via unanimous decision. Now that Masvidal has fought for the Strikeforce title, his career will likely be stuck in neutral unless Melendez moves on to the UFC. There are plenty of match-ups still left on the table for Masvidal in Strikeforce, but even if he were to win some big fights, he is unlikely to earn another title shot as long as Melendez is champion. Masvidal’s submission defense is still his Achilles heel, but his takedown defense has proven excellent in recent fights. Masvidal has some of the best striking in the division, evidenced by his dominating win over fellow striker K.J. Noons. Take away a few controversial decisions and a come-from-behind submission loss, and Masvidal would likely be considered one of the elite fighters in the entire lightweight division. That inconsistency is what currently holds Masvidal back from making the next step in his career.