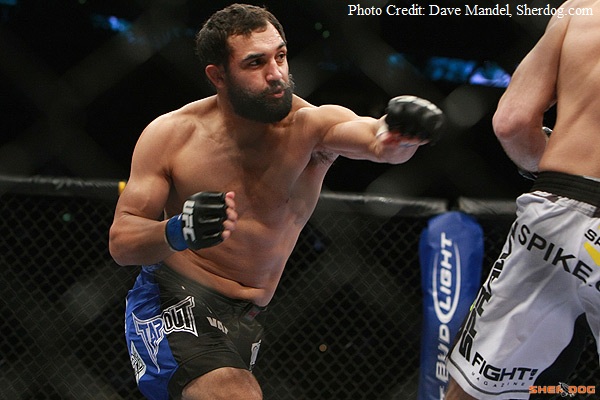 Background:
Johny Hendricks is quickly making a name for himself in the UFC, thanks to his high-level wrestling, knockout power, and trademark beard. Hendricks had a decorated collegiate wrestling career for powerhouse Oklahoma State University. Hendricks was a 4-time All-American before making his transition to mixed martial arts in 2007. Hendricks rattled off 3 wins before being signed to the WEC. Hendricks went 2-0 in the WEC, ultimately making his way to the UFC where he squared off against TUF 7 winner Amir Sadollah in 2009 in his UFC debut. Hendricks was still a fairly unknown commodity coming into his fight with the much-hyped Sadollah. Hendricks showed off his power as he rocked Sadollah with punches forcing the ref to stop the fight in the 1st round. Hendricks went on to win his next 3 fights in the UFC, collecting victories over Ricardo Funch, T.J. Grant, and Charlie Brenneman. Hendricks looked to be on the verge of breaking into the top 10 when he faced off with Rick Story at the TUF 12 Finale. Story was able to control the pace and use solid clinch work and defensive wrestling to pull off the upset unanimous decision. Hendricks bounced back with a 1st round TKO victory over T.J. Waldburger before narrowly out-pointing Mike Pierce. Hendricks was rewarded with a marquee matchup against perennial #2 contender Jon Fitch at UFC 141. Hendricks was able to blast Fitch in the opening seconds of the round to achieve his biggest win to date, immediately putting him in the title hunt.

2011 Breakdown:
Hendricks went 3-0 in 2011, winning Knockout of the Night honors in 2 of his fights.
Hendricks was initially scheduled to face Paulo Thiago at UFC Live 3, but the fight was scrapped after an injury to Thiago.
Hendricks ended up accepting a bout as an injury replacement against T.J. Waldburger at Fight Night 24. Hendricks was able to connect with a solid left hand that rocked Waldburger forcing the ref to stop the fight early in the 1st round.
Hendricks moved on to face gritty wrestler Mike Pierce at UFC 133 in a battle of up-and-comers. Just as many experts thought, the fight was a back-and-forth war of attrition. They both landed an equal amount of strikes, though Hendricks seemed to narrowly get the better of the first 2 rounds as he continually tried to push the pace. Pierce was able to score a takedown in the 3rd round, but beyond having top control did not land anything significant. The fight ended in a split decision with Hendricks being declared the winner.
Following his win over Pierce, Hendricks was elevated into a marquee matchup opposite Jon Fitch at UFC 141. Hendricks connected in the opening seconds of the fight, dropping FItch to the floor for the stunning 1st round knockout victory.

2012 Forecast:
Hendricks truly elevated his status in the division following his KO win over Fitch in 2011. Hendricks has the skills to be a longterm contender in the welterweight division. He is still only 28-years old and is luckily entering his prime just as he faces off against the division’s elite. Hendricks’ knockout power makes him a dangerous threat to GSP if he were to ever challenge for the title. Hendricks has struggled at times against fellow wrestlers (Story, Grant), but certainly has the grappling to dominate most opposition. Once Hendricks gains more confidence in his big left hand, he should be one of the frontline welterweight contenders for years to come.