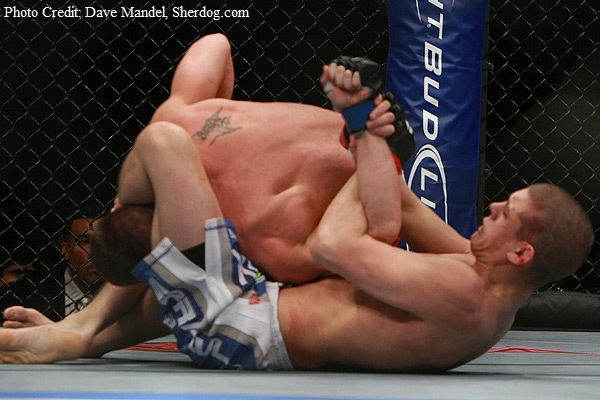 Background:
Joe Lauzon began his MMA career in 2004, jumping out to an 8-0 record including a submission win over former WEC featherweight champion Mike Brown. Lauzon’s resolve would be tested as he struggled to 2-3 record in his next 5 fights, though his losses came to respected veterans Jorge Masvidal, Ivan Menjivar, and Raphael Assuncao. Lauzon bouncec back with 3 straight wins before signing with the UFC in 2006 as an injury replacement. Lauzon was the heavy underdog coming into his fight with recently re-signed and former UFC lightweight champion Jens Pulver. Lauzon pulled off the improbable upset by knocking out Pulver in the 1st round. Lauzon went on to enter The Ultimate Fighter 5 house where he quickly became one of the favorites to win the show. Lauzon defeated Brian Geraghty and Cole Miller before losing to Manny Gamburyan in the semi-finals. Lauzon racked up consecutive UFC wins post-TUF before facing off against lightweight contender Kenny Florian. The two Massachusetts natives garnered Fight of the Night honors, though Florian walked out the winner via TKO. Lauzon bounced back with 2 straight finishes over Kyle Bradley and Jeremy Stephens before being sidelined with due to knee issues. Upon his return, Lauzon lost to Sam Stout via unanimous decision. Lauzon rebounded by defeating fellow TUF 5 alum Gabe Ruediger, but soon lost via submission to rising contender George Sotiropoulos. Lauzon was continuing to struggle against top competition, but that all changed in 2011 as Lauzon racked up a win over Curt Warburton before facing off with hard-hitting contender Melvin Guillard. Lauzon pulled off the upset, submitting Guillard in the very 1st round.

2011 Breakdown:
Lauzon went 2-0 in 2011, rebounding from a dismal 1-2 year in 2010.
Lauzon faced Curt Warburton at UFC Live 4, quickly showing his superior skills by dropping Warburton with punches before submitting him via kimura in the very 1st round.
Lauzon moved on to face rising contender Melvin Guillard at UFC 136. Guillard was riding a 5-fight win streak and looked to be on the brink of a title shot, but Lauzon shocked the MMA world by stumbling Guillard with a left hand before locking on the rear-naked choke for the victory.

2012 Forecast:
Lauzon pulled off a huge upset over Guillard bringing back memories of his UFC 63 debut against Jens Pulver. Lauzon’s ground game has always been considered a strength, but he seems to have made significant strides in the striking department. Lauzon has power in his left hand, which has led him to victory on more than one occasion. Lauzon’s conditioning haunted him in 2010, but as long as he has addressed those issues, he has the skills to continue and climb the UFC lightweight ranks.