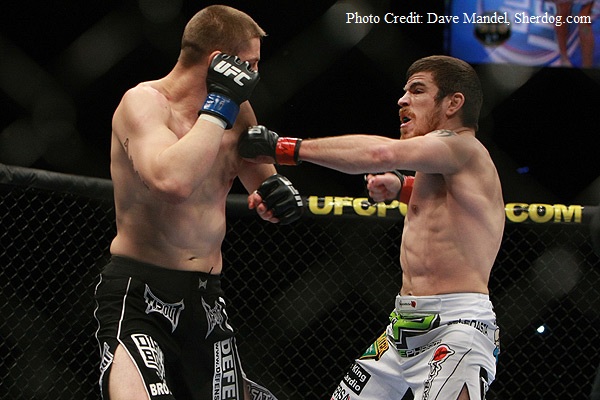 Background:
Jim Miller is one of the perennial contenders in the UFC lightweight division. Jim’s older brother, Dan, also competes in the UFC as a middleweight. Miller made his MMA debut in 2005, quickly establishing himself as one of the top fighters on the East Coast. Miller went 11-1 on the independent circuit defeating veterans Bart Palaszewski, Chris Liguori, and Anthony Morrison. Miller’s only loss during this time came to future UFC lightweight champion Frankie Edgar in a back-and-forth war of a fight. Miller eventually signed with the UFC in 2008 following the IFL’s demise, Miller won his first 2 UFC fights over David Baron and Matt Wiman before losing to Gray Maynard via unanimous decision. Miller bounced back with a 7-fight win streak, defeating Mac Danzig, Mark Bocek, Gleison Tibau, and Charles Oliveira. Miller was on the verge of a title shot, but lost to Ben Henderson.

2011 Breakdown:
Miler went 1-1 in 2011.
Miller faced Kamal Shalorus in front of a hometown crowd at UFC 128. After a close 1st round, Miller began to show his dominance, finally winning the fight in the 3rd round via TKO. Miller showed off some improved striking throughout the bout as he outclassed the veteran Shalorus.
Miller, owner of a 7-fight win streak, was on his way to a likely title shot with one more win. Miller faced off against Ben Henderson at UFC Live 5. In a shockingly one-sided fight, Henderson controlled Miller throughout the fight, winning the war of attrition. Henderson surprised Miller with his strength and wrestling, ultimately ending Miller’s title hopes.

2012 Forecast:
Miller is still one of the top contenders in the division. His wrestling and tenacity make him one of the toughest fighters in the UFC, and he has also made strides in his striking game. Miller should be back in the title picture with a couple more wins, though a move to featherweight could strongly bolster his title hopes. Miller previously competed as a featherweight, thought it was years ago, but considering the lack of title challengers at 145, the move could pay off immediately.