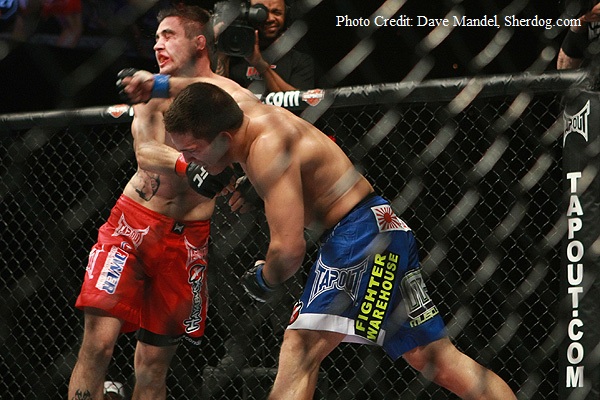 Background:
Jake Ellenberger is a current title contender in the UFC welterweight division. Ellenberger has rare knockout power and high-level wrestling. Ellenberger made his mixed martial arts debut in 2005, winning his first 12 fights on the independent circuit. Ellenberger bounced around between the IFL and Bodog promotions, where he struggled through a 3-3 stretch, losing to veterans Jay Hieron and Delson Heleno. Ellenberger bounced back with a signature-knockout victory over Brazilian legend Jose “Pele” Landi-Jons. Ellenberger continued to fight across varying promotions, including M-1 and Bellator, going 5-1 overall, his only loss coming to future UFC fighter Rick Story in a hotly-contested decision. Ellenberger finally signed with the UFC in 2009 as an injury replacement for Chris Lytle who was scheduled to face Carlos Condit. Ellenberger gave Condit all he could handle in the 1st round before gassing out in the latter rounds. Ellenberger lost via unanimous decision, but has not tasted defeat since, winning his last 5 fights over Mike Pyle, John Howard, Carlos Eduardo Rocha, Sean Pierson, and Jake Shields. Ellenberger’s most recent knockout win over Shields has him on the cusp of a title shot heading into 2012.

2011 Breakdown:
Jake Ellenberger went 3-0 in 2011 continuing his quick rise up the UFC welterweight ranks.
Ellenberger began the year set to face perennial contender Jon Fitch at UFC 126, but instead faced late-replacement grappler Carlos Eduardo Rocha. Surprisingly, Rocha gave Ellenberger all he could handle for 3 rounds. After nearly being submitted in the 1st round, Ellenberger used a conservative gameplan to narrowly earn the final 2 rounds. Ellenberger won the fight via split decision.
Ellenberger stepped right back into action 2 months later as an injury replacement at UFC 129 against Canadian Sean Pierson. Pierson was willing to engage with Ellenberger on the feet, and he paid dearly for it, losing via 1st round knockout.
Ellenberger received prime billing after his knockout win, headlining UFC Fight Night 25 opposite former title contender Jake Shields. Ellenberger wisely avoided Shields’ initial takedown attempts, landing a few crushing knees and punches that dropped Shields, forcing the referee stoppage.

2012 Forecast:
Jake Ellenberger is easily considered to be one of the rising stars in the UFC. Ellenberger’s wrestling and knockout power have proved to be a difficult combination for opponents to solve. Ellenberger’s hard-hitting style has raised some conditioning concerns, so he will need to learn and harness his energy as he continues to step up in competition, and possibly partake in 5-round fights should he challenge for the title. Ellenberger could be just one big win away from fighting for the title with GSP on the sidelines. He seems to have the right mix of skills to possibly unseat the reigning champion should he earn a title shot in 2012.