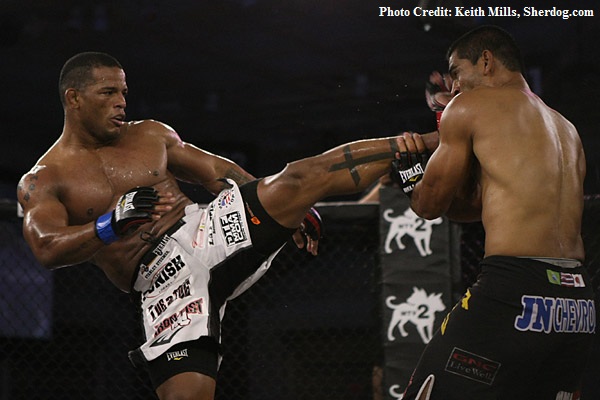 2012 Forecast:
Hector Lombard is the reigning Bellator middleweight champion, currently riding an unfathomable 24-fight win streak. Lombard’s background in Judo allowed him the opportunity to find a way out of Cuba as he eventually found a new home in Australia. Lombard racked up 5 straight wins to begin his MMA career before receiving the call up to PRIDE. Lombard went 0-2 in PRIDE, losing decisions to Akihiro Gono and Gegard Mousasi. Those two losses are the only blemishes on Lombard’s resume besides a 2007 draw with UFC veteran Kyle Noke. Lombard defeated James Te-Huna and Brian Ebersole along the way to earning a Bellator contract in 2009. Lombard ran through the Bellator competition, finishing Virgil Lozano, Damien Stelly, and Jared Hess to win the inaugural Bellator middleweight championship. While awaiting new tournament champions, Bellator fed him overmatched veterans Jay Silva, Hector Goodman, Niko Vitale, and Trevor Prangley, all of whom Lombard finished via strikes. He also picked up wins over UFC veterans Kalib Starnes, Joe Doerksen, and Jesse Taylor in Australia. Lombard only defended his Bellator title once in the last two plus years, winning a unanimous decision over Alexander Shlemenko.
Lombard has made it known that he is tired of waiting around for Bellator to find him suitable opposition. Lombard’s contract is supposedly about to expire and it is no secret that he may explore his options. Bellator would be wise to let Lombard go as they have struggled to find him suitable opposition. Lombard has the skills and killer instinct to be an immediate title contender in the UFC. With Anderson Silva nearing retirement, Lombard has a chance to take his throne. Lombard’s only limitations are his size and conditioning. He is compact and carries a ton of muscle on his 5’9 frame. We have seen Rousimar Palhares struggle at times due to his reach, but Lombard seems to have no problems working his way inside as he has held his own against light heavyweights in the past.