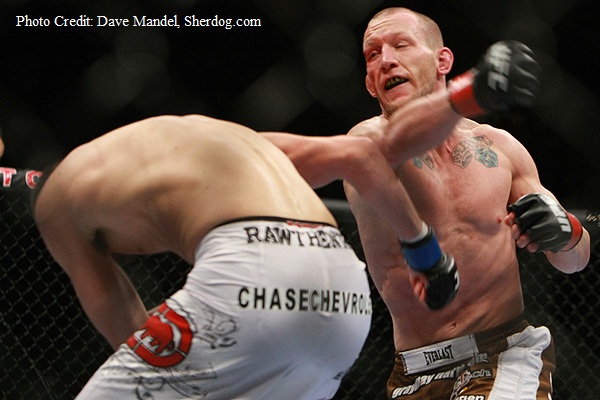 Background:
Gray Maynard fought for the title twice in 2011, falling just short of winning the UFC lightweight championship. Maynard wrestled collegiately at Michigan State University earning All-American honors before making his MMA debut in 2006. Maynard went 2-0, including a victory over Bellator lightweight Brent Weedman before being selected to appear on season 5 of the The Ultimate Fighter. Maynard defeated Wayne Weems and Brandon Melendez before being submitted by Nate Diaz in the semi-finals. Maynard went on to make his official UFC debut at the TUF 5 Finale against castmate Rob Emerson. The fight ended in a no-contest after Maynard slammed Emerson leaving him unconscious, and Emerson tapping due to a rib injury. Maynard put his last two fights in the rearview mirror as he went on a terror across the lightweight division using his top-level wrestling and improving striking to win 8 straights fights, including wins over Dennis Siver, Frankie Edgar, Jim Miller, Roger Huerta, Nate Diaz, and Kenny Florian. Maynard was unquestionably the #1 contender after defeating Florian, leading to a showdown with reigning UFC lightweight champion Frankie Edgar. In their championship fight, Maynard knocked Edgar down early, but could not finish him, leaving the fight in the judges’ hands, which resulted in a controversial draw. The rematch was booked for UFC 136 as Maynard once again proved his dominance in the 1st round, only to fade down the stretch as Edgar battled back to win via 4th round TKO.

2011 Breakdown:
Maynard went 0-1-1 in 2011 suffering heartbreaking setbacks to Frankie Edgar.
Maynard challenged Frankie Edgar for the UFC lightweight strap at UFC 125. Maynard dominated the action early, nearly finishing Edgar in the 1st round. Edgar was able to somehow survive and control parts of the next 4 rounds as Maynard noticeably fatigued. The judges scored the fight a draw leading to an immediate rematch.
At UFC 136, following a bevy of injuries to both fighters, they squared off once again to settle their trilogy once and for all. Maynard struck first again, rocking Edgar with big punches and nearly having him finished, but Edgar made it through the round and ultimately went on to win the next 2 rounds before scoring the 4th round TKO victory.

2012 Forecast:
Maynard is still one of the top lightweights in the world, but he will have to win a few fights before receiving another title shot. Maynard’s fighting style has noticeably changed over the years as he has relied less and less on his wrestling and more on his striking. This may have possibly played a role in his draw and loss to Edgar, as Maynard had previously beaten Edgar mainly with his wrestling. Maynard made a shift in fight camps following his loss to Edgar leaving Xtreme Couture to bounce around fight camps looking for the best fit. Maynard should be a contender for years to come, but he needs to learn and pace himself and use his wrestling when the time calls for it.