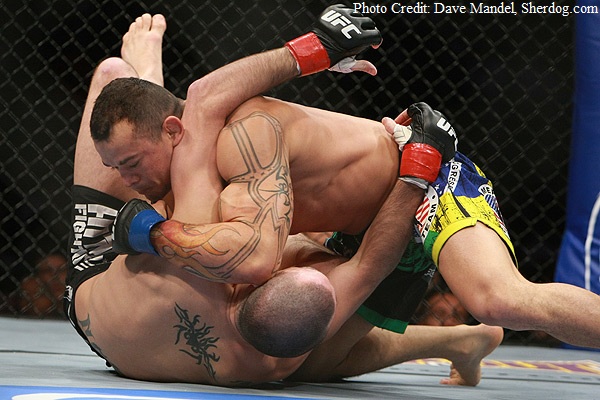 Background:
Gleison Tibau is one of the strongest fighters competing at 155 lbs. today. Tibau fights out of American Top Team, but originally started his career in his native Brazil back in 1999, supposedly at only 15-years old according to his record and date of birth. Tibau defeated current UFC welterweight Thiago Alves in his second career fight on the Brazilian independent circuit, while also taking a decision over famed BJJ artist Fernando Terere. Tibau soon traveled to Japan where he suffered his first career loss to Eiji Mitsuoka. Tibau returned to Brazil and dominated the local scene going 14-2 overall, while defeating top Brazilian fighters Adriano Martins, Carlos Pereira, and Fabricio Camoes. Tibau eventually signed with the UFC in 2006, and made his debut against Nick Diaz as a welterweight. Tibau lost via 2nd round TKO, and soon thereafter made the drop to lightweight. It proved to be a wise choice as Tibau won 3 straight fights, highlighted by a decision victory over rising prospect Terry Etim. Tibau stepped up in competition to face Joe Stevenson and Tyson Griffin, but disappointingly lost both bouts. Tibau seemed to turn the corner following those losses, going 4-1 with respectable wins over veterans Rich Clementi, Jeremy Stephens, Josh Neer, and Caol Uno. His only loss came to Melvin Guillard in a split decision that many fans felt he had won. Nonetheless, Tibau received a marquee matchup against Jim Miller, but came up just short, losing a hard-fought decision. Tibau has since notched wins over Kurt Pellegrino, Rafaello Oliveira, and Rafael Dos Anjos that have him positioned for another crack at a top contender.

2011 Breakdown:
Tibau went 3-0 in 2011, continuing to press his case as one of the top lightweight fighters in the world.
Tibau started out the year facing fellow grappler Kurt Pellegrino. In a back-and-forth battle full of momentum swings, Tibau was able to squeak out a split decision victory thanks to a solid 3rd round. I scored the fight a draw.
Tibau was then set to face Bart Palaszewski as an injury replacement at UFC 130, but Palaszewski went down with his own injury forcing the UFC to sign Brazilian Rafaello Oliveira on just a few days notice. The fight was close early, but Tibau began using his strength to score a few takedowns. Tibau would later hurt Oliveira with a left hand in the 2nd round, which ultimately led to Tibau locking on the rear-naked choke for the submission victory.
Tibau returned to face fellow Brazilian Rafael Dos Anjos at UFC 139. The fight started off close as both fighters looked evenly matched. Tibau was able to dominate the 2nd round thanks to some power punches paving the way to a hard-fought split decision victory.

2012 Forecast:
Tibau is 7-2 since 2009 with his only two losses coming to Melvin Guillard and Jim Miller via close decisions. With those stats, you would think Tibau would be in the mix of top contenders, but he is continually left out of those discussions likely due to his lack of finishing skills. Tibau is a huge lightweight and uses his grappling to overpower most of his competition. He has struggled when matched against other high-level wrestlers because he has to rely on his striking skills, which are still just average. Tibau did well in his fight against Jim Miller, which should merit him another shot against a top contender.