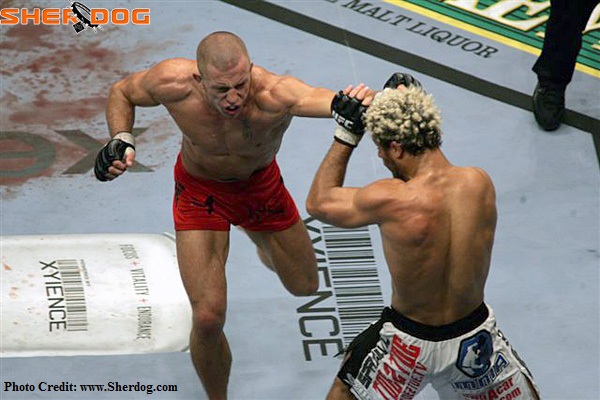 Background:
Georges St.Pierre is the reigning UFC welterweight champion and one of the best pound for pound fighters in the world. GSP began his mixed martial arts career in 2002, where he faced future UFC veteran Ivan Menjivar in his debut fight. GSP won via 1st round TKO and never looked back, winning his next four fights via finish, including victories over Pete Spratt and Travis Galbraith. GSP was quickly signed by the UFC in 2004, facing off with fellow top prospect Karo Parisyan. GSP pulled off the mild upset, beating Parisyan via unanimous decision. GSP went on to dominate Jay Hieron, which propelled him into a title fight with former champion Matt Hughes for the UFC welterweight championship, which was left vacant by B.J. Penn’s departure. After starting out the fight strong, GSP succumbed to an armbar with just seconds left in the 1st round. The loss seemed to motivate GSP more than ever, as he put together dominant performances against Jason Miller, Frank Trigg, and Sean Sherk. In order for GSP to get another crack at the title, he would first have to face off with the returning former UFC welterweight champion B.J. Penn, who had left the UFC nearly 2 years prior. GSP and Penn put on a back-and-forth war that left GSP’s face looking beat up, though he was ultimately able to pull off the win due to Penn fading down the stretch. GSP finally got his rematch with Hughes, 2 years since they first faced off. GSP wasted no time seizing the moment, finishing Hughes via 2nd round TKO and laying claim to the UFC welterweight championship. GSP would make his first title defense against former lightweight and recent TUF 4 winner Matt Serra. Serra was a substantial underdog going into the fight, but caught GSP off-guard with a few striking exchanges. GSP could not recover and was eventually finished via strikes in the 1st round of what proved to be the most shocking upset in UFC history. GSP’s fighting style soon changed after his loss to Serra. GSP became more calculated and began relying heavily on his wrestling and top control. GSP fought his way back to the title by defeating Josh Koscheck and then knocking off Hughes for the UFC welterweight interim title. GSP was forced to wait for Serra to heal up from injuries, but he finally got his revenge at UFC 83 where he easily defeated Serra via 2nd round TKO to unify the UFC welterweight championship belt. GSP has since defended his title six straight times, defeating Jon Fitch, B.J. Penn, Thiago Alves, Dan Hardy, Josh Koscheck, and most recently Jake Shields. GSP is one of the most dominant fighters of his era and is likely to go down as one of the best fighters in mixed martial arts history.

2011 Breakdown:
GSP only defended his UFC welterweight championship once in 2011 due to a variety of injuries.
St.Pierre put his title on the line against newly-acquired Strikeforce fighter Jake Shields. St.Pierre comfortably controlled most of the fight with his conservative striking, providing Shields few opportunities to bring the fight to the floor. GSP did suffer some swelling around his eye during the fight that made him vulnerable in the final round, but otherwise he once again outclassed another title contender.
St.Pierre was rumored to possibly be facing Anderson Silva, but instead was booked against Strikeforce welterweight champion Nick Diaz at UFC 137. Diaz missed some press events and was soon replaced by Carlos Condit. GSP was forced off the card as well due to injury.
Once healed, GSP was once again set to face Diaz at UFC 143, but GSP suffered a torn ACL and would be sidelined for the remainder of 2011 and likely most of 2012.

2012 Forecast:
Georges St.Pierre’s fighting style has noticeably changed since his loss to Matt Serra back in 2007. GSP’s one vulnerability is his willingness to absorb damage. St.Pierre does everything possible to avoid risks that could lead to him getting hit. GSP uses his jab to perfection and has relied heavily on his wrestling skills to take the fight to the floor where he can achieve more dominant positioning. GSP has fought a host of strikers in recent title fights such as Thiago Alves, B.J. Penn, and Dan Hardy, but he has refrained from firing off combinations where he could possibly leave his opponents an opening to counter. GSP’s injuries are also becoming a concern. If his wrestling skills decline he will be forced to stand and trade with a new host of fighters coming up the ranks. GSP has also hinted at possibly trying out for the Olympic wrestling team. St.Pierre has made enough money in the sport to retire comfortably, but he is likely to defend his title a few more times before possibly considering retirement.