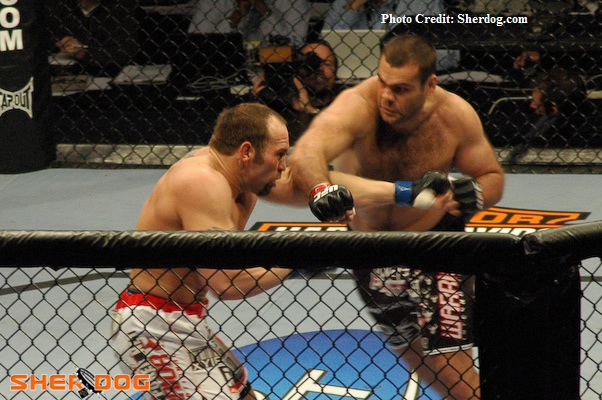 Background:
Gabriel Gonzaga was a former UFC heavyweight title contender before eventually being released in 2010. Gonzaga came from a BJJ background before making his way to MMA in 2003. Gonzaga won his first 2 fights, including a submission victory over UFC veteran Branden Lee Hinkle. Gonzaga took part in Brazil’s Jungle Fights promotion, going 1-1 overall, his only loss coming to Fabricio Werdum. Gonzaga competed once more on the Brazilian independent circuit before signing with the UFC in 2005. Gonzaga made his debut at UFC 56 against Kevin Jordan. The fight was marred throughout by a lack of action, but in the final seconds of the bout, Gonzaga brought the crowd to its feet by knocking Jordan out with a perfectly-placed superman punch. Gonzaga would go on to win his next two fights, impressively finishing Fabiano Scherner and Carmelo Marrero. Gonzaga was quickly moving up the ranks of the UFC heavyweight division before being elevated to main event status as he faced off with PRIDE legend Mirko Cro Cop. Cro Cop was thought to be a heavy favorite coming into the bout that would likely setup a championship showdown with Randy Couture. Gonzaga pulled off the improbable upset by knocking out Cro Cop with Cro Cop’s own trademark head kick to score one of the most devastating knockouts in UFC history. Gonzaga was rewarded with a title shot against Randy Couture at UFC 74. Gonzaga seemed to be a true threat to Couture’s title reign coming into the fight. Gonzaga looked for the knockout early, but Couture pulled off a vintage performance, winning the inside clinch battles before finishing Gonzaga via TKO in round 3. Gonzaga looked to bounce back by avenging his previous loss to Fabricio Werdum, but once again suffered a TKO loss to his fellow Brazilian. Gonzaga’s top contender status was fading fast following consecutive losses, though he picked up impressive 1st round finishes against overmatched opposition, Justin McCully and Josh Hendricks. Gonzaga would test his skills against another top contender, this time facing hard-hitting Shane Carwin. Gonzaga rocked Carwin early, but Carwin roared back to land his own knockout shot, finishing Gonzaga in the 1st round. Gonzaga rebounded by defeating Chris Tuchscherer via 1st round TKO, though the bout was marred by low blows. Gonzaga moved on to face rising contender Junior Dos Santos, but once again succumbed to a top contender, losing via 1st round knockout. Gonzaga would suffer another loss at UFC 121, falling via decision to Brendan Schaub, dropping his record to just 1-3 in his last 4 fights. Gonzaga was subsequently released by the UFC. Gonzaga hinted at possible retirement, but eventually made his return on the independent circuit, defeating Parker Porter via submission. Gonzaga was re-signed to the UFC following the win and is set to make his octagon return in 2012.

2011 Breakdown:
Gonzaga only fought once in 2011, winning his only fight via submission.
Following Gonzaga’s release from the UFC in 2010, Gonzaga had hinted at retirement from mixed martial arts. Yet, he soon made his return against Parker Porter. Gonzaga dominated most of the fight, eventually dropping Porter with strikes before submitting him in the 3rd round.
Gonzaga was re-signed to the UFC as an injury replacement for their UFC 142 fight card in 2012.

2012 Forecast:
Gabriel Gonzaga will make his return to the UFC in 2012 following his release in 2010. Gonzaga’s last run in the UFC ended in a 1-3 rut. Gonzaga still has one of the strongest ground games in the heavyweight division, but he struggled to showcase those skills ever since knocking out Mirko Cro Cop. Hopefully, Gonzaga has learned from recent losses that he can no longer be a contender if he solely relies on his striking. Gonzaga has huge knockout power, but he has always been too patient in letting his hands go. Gonzaga has not done well when he gets hit, so he will need to learn how to avoid putting himself in dangerous situations. Gonzaga belongs in the UFC, but for him to become a contender again he will have to diversify his fighting style.